What's On
You are at:Home»Countries»New Weekend Brunch at Potato Head Folk
By Carrie Er on March 1, 2016 Countries, Eat & Drink, Singapore

Little would you expect to have brunch at Potato Head Folk as its restaurant wing Three Buns is known more for its myriad of signature gourmet burgers. However, that’s about to change as they have recently launched a weekend brunch menu that is available on both Saturday and Sunday, from 11am to 4pm.

Inspired by British influences, head chef Adam Penney brings to the table a brunch menu  unlike what you see at a typical cafe. Alongside handcrafted cocktails such as the classic Bloody Mary and unique concoctions like Bunny Mary and Mary A Go Go, the dishes featured are imbued with a British element. Each of them has its own distinctive taste and style of preparation. 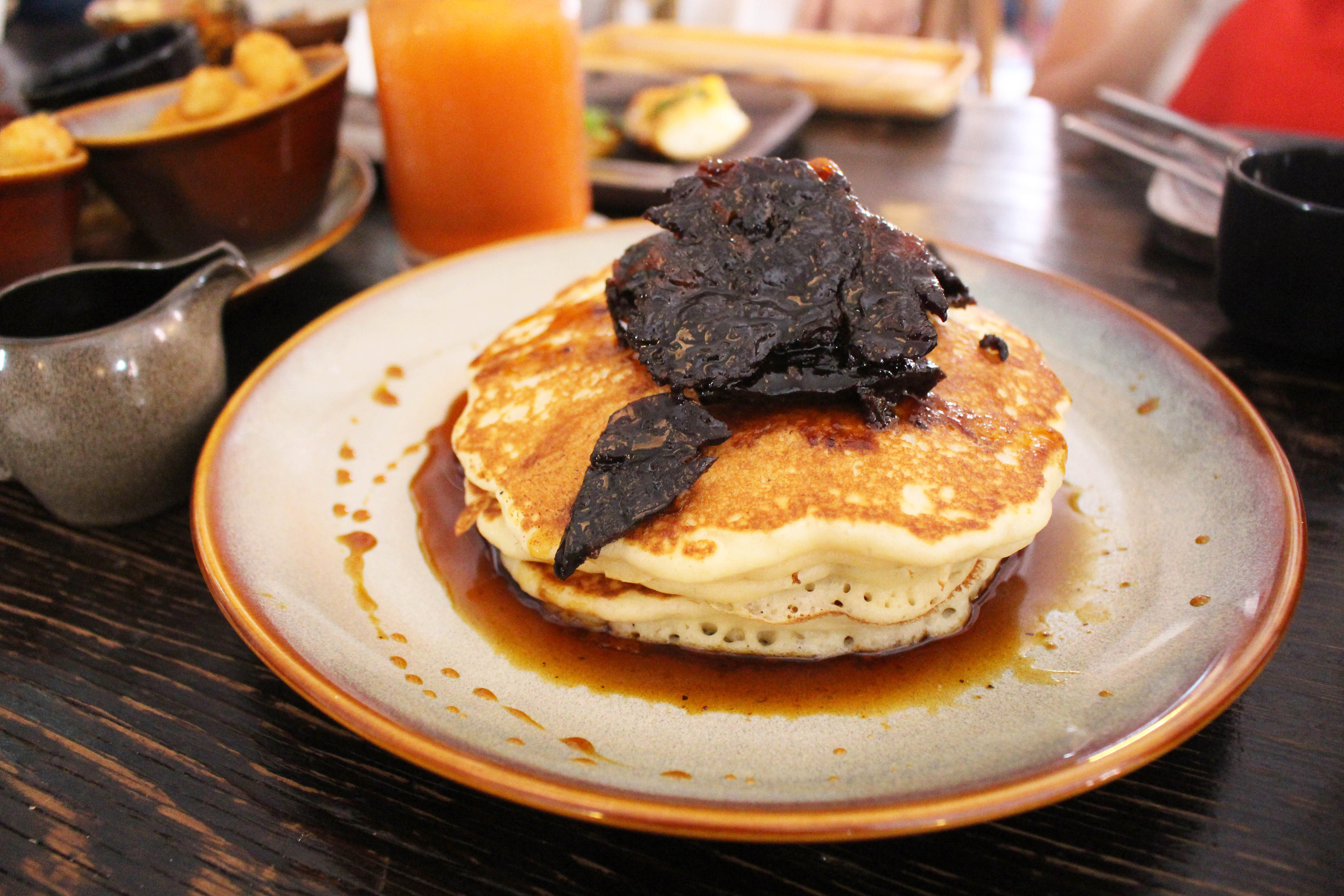 Bak Kwa To Basics: Coconut rice griddlecakes, served with bak kwa sold at the shop next to Three Buns, and maple syrup, S$12.

Likened to a local spin on the classic English breakfast, Bak Kwa To Basics (S$12) uses with our all-time favorite bak kwa (dried Chinese pork jerky) instead of the bacon streaks that are usually paired with pancakes. The combination of bak kwa and pancakes sounds awfully dubious, and we don’t blame you if you are sceptical.

I had expected the dish to be too sweet, but as it turned out, the level of sweetness was just right and not heavy at all. The griddle cakes made of coconut rice were soft, fluffy; and well complemented by the chewy texture of the barbecued pork. This Asian equivalent of beef jerky was juicy and succulent, and had us wanting more. As decadent and calorie-high this dish sounds, it is nonetheless a must-try at Three Buns. 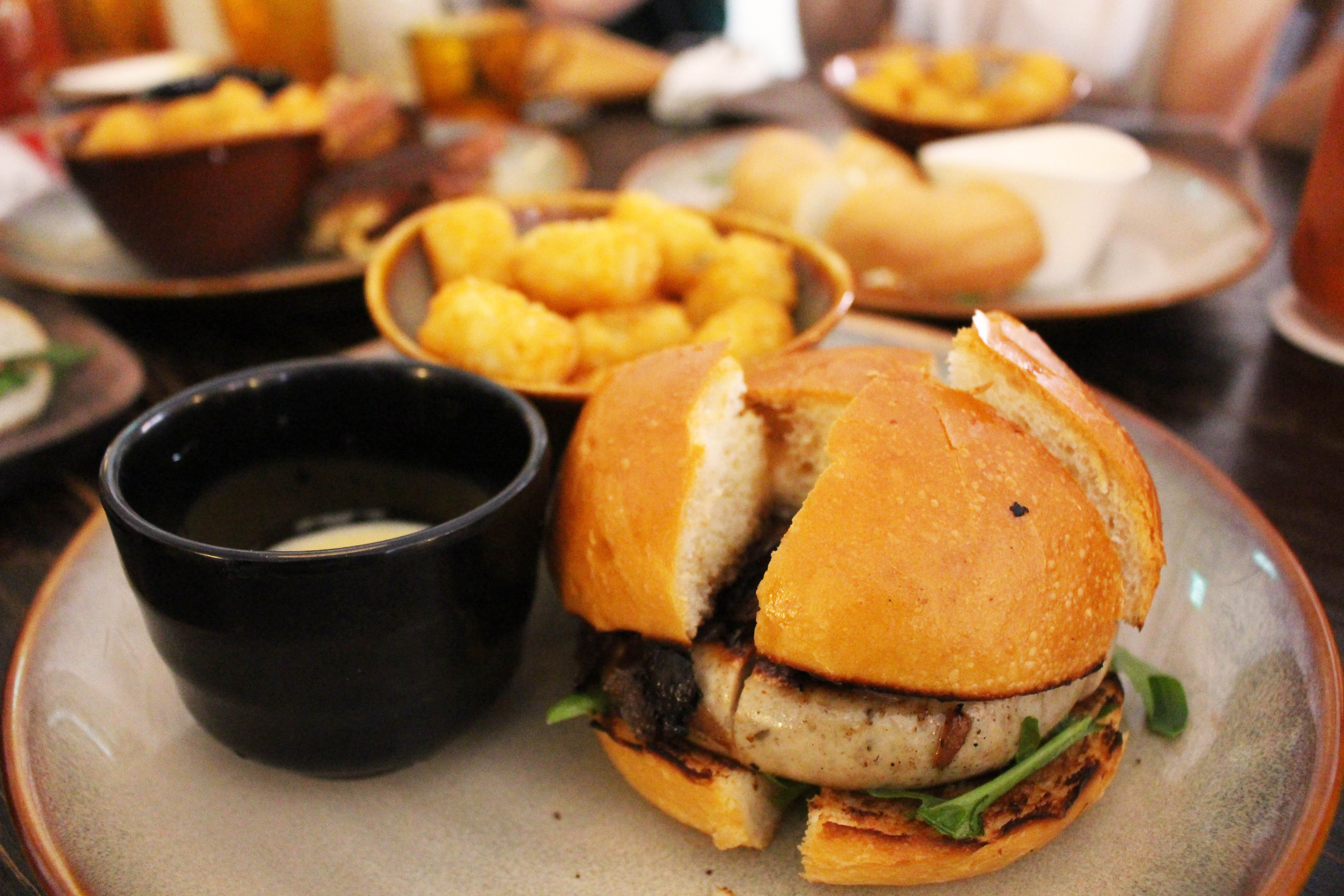 All burgers are served with a side of tater tots, which complements well with a homemade sauce served on the side. It is actually commonplace for British to douse their chips with vinegar. While some may find vinegar too overpowering, the taste of vinegar in the homemade sauce is nothing like that. Lil Miss Piggy (S$19) is unlike your typical sausage burger as the chef pays attention to even the slightest details when coming up with the brunch menu. For instance, the choice of brioche bun works really well here with the Cumberland sausage, as compared to other types of buns. Besides that, the truffled onion jam managed to bring out the sapid taste of the sausage too. 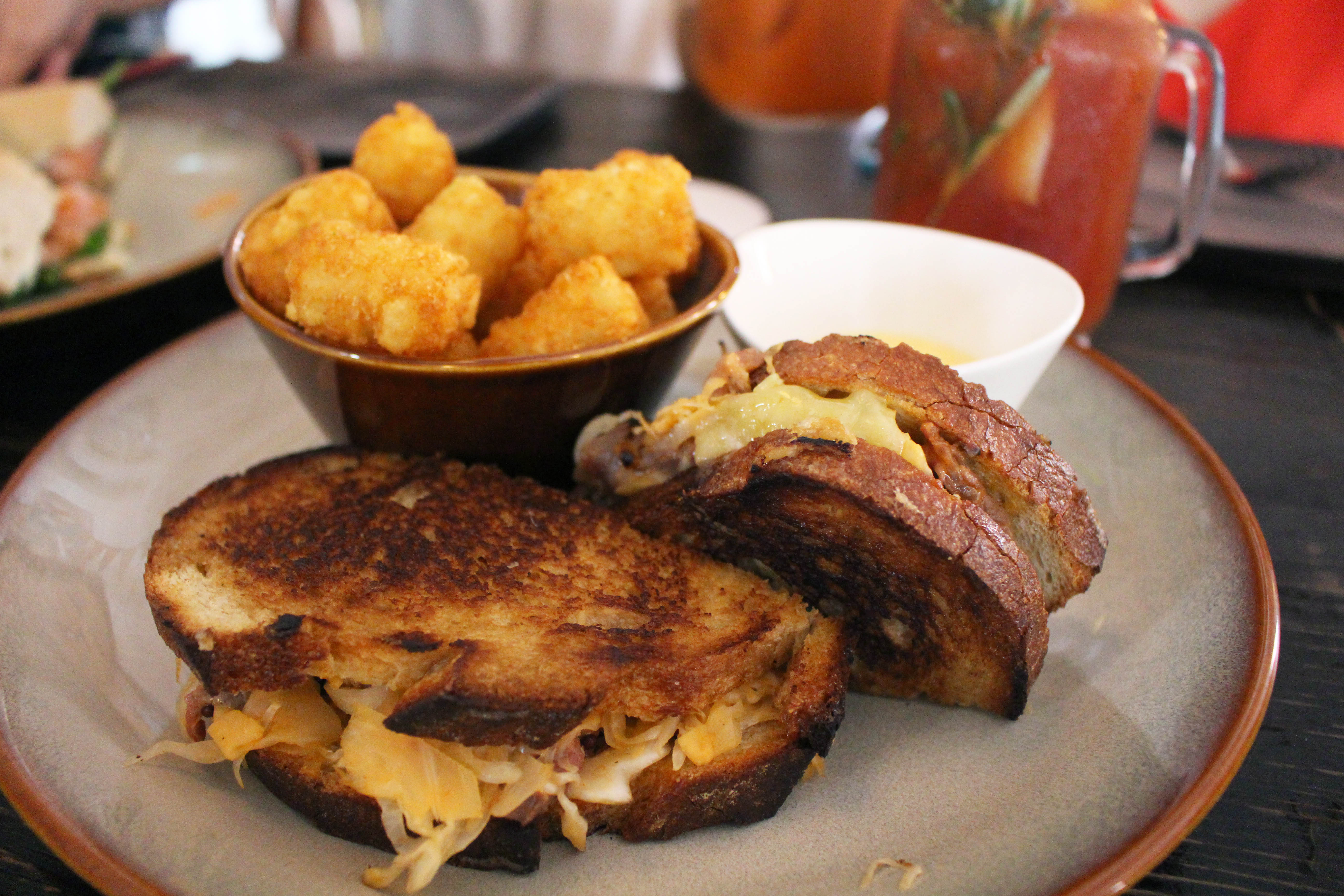 Our favourite burger in the brunch menu has got to be Wubenz (S$18), which tastes just as interesting as its name suggests. Beef lovers should try this on their first visit to Three Buns. We could not stop raving about it after sinking our teeth in it. The spicy Sriracha style Russian dressing and nutty-tasting smoked cheese enhanced the robust flavour of the beef. In fact, the beef on its own was already good enough. A section of the Three Buns Dining Kitchen

Hardly do the same building house three different dining concepts, so one should give Potato Head Folk a try. Be it for a quick lunch fix or happy hours to unwind after work, this is the place for you as there are a bar lounge and rooftop garden for alfresco dining. There is also a lunch menu, catered to the lunchtime crowd who happen to work in the nearby vicinities. Prices are reasonable too. Besides that, the tastefully adorned interiors and cosy setting of the dining kitchen add to the delightful dining experience one gets at Potato Head Folk.

Opening Hours: Tue to Sun 11 am to 12 midnight; Closed on Mon

Carrie is a daydreamer who finds joy in spreading words of great must-go places and experiences not to be missed. She believes that good things are meant to be shared.