What's On
You are at:Home»Eat & Drink»A Whimsical Night at Potato Head Folk
By Mark Tan on April 5, 2015 Eat & Drink, Singapore

One would most probably not be thinking of famous children’s book author Enid Blyton when heading to a cocktail bar. However, that was exactly whom I was thinking about when heading up the stairs to Studio 1939, the cocktail bar on the third floor of Potato Head Folk on Keong Siak Street.

It was hard not to be thinking of the author — a mural depicting popular characters from the author’s books, along with art pieces, created by renowned Australian artist David Bromley spans the entire stairwell of the four-storey shophouse that was built in 1939. The playful appeal extends even to Studio 1939 and the cocktail menu. 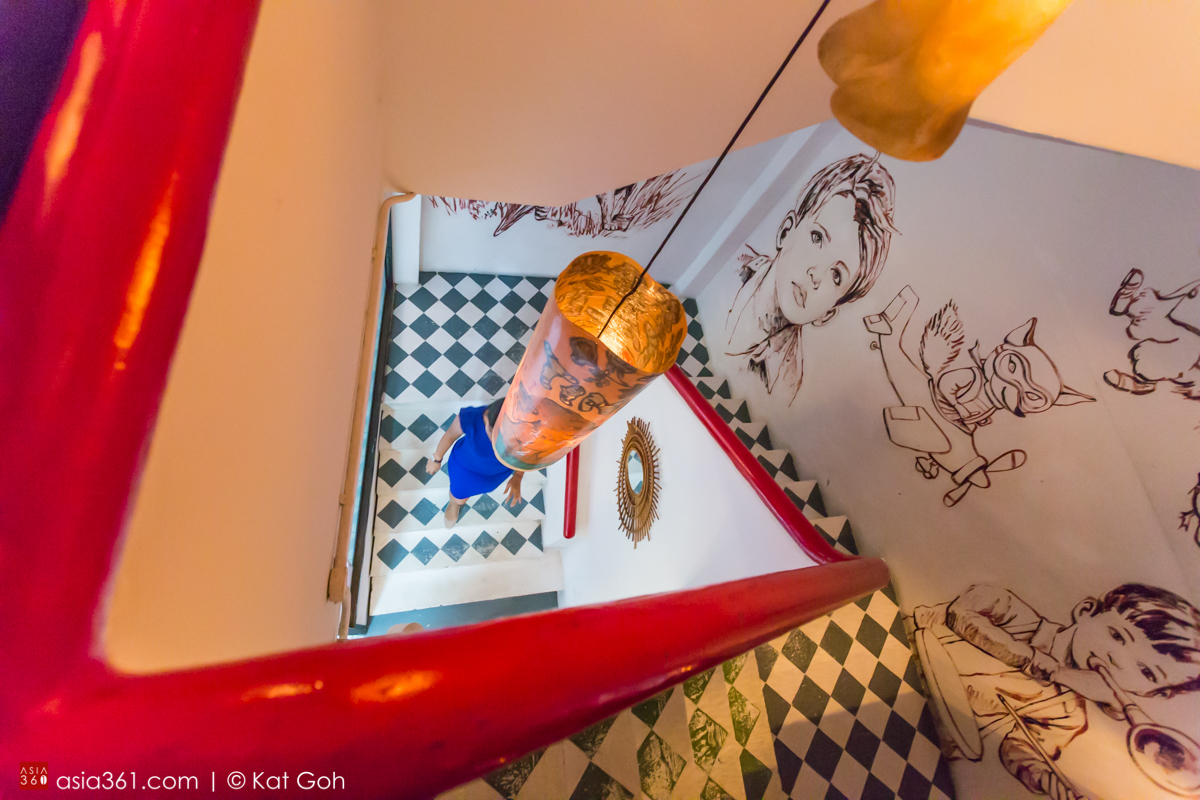 Walking into Studio 1939, the first thing which caught my eye was the bar on the opposite end of the room. The bar counter is unconventionally shaped, like a hammer. The marble counter-top with pick hues that forms the ‘hammerhead’ draws the eye and is beautifully framed by shelf upon shelf of warmly lit liquor lining the wall. Cushioned rattan seats and used leather sofas make up the rest of the room in an eclectic mix of colours and texture. One would think this mishmash of dark hues, antique furniture and a modern bar coupled with weird mechanical smoking clown dolls would be an assault on the senses, but it all somehow seems to work in a crazy, charming sort of way.

We were introduced to Irwan, the head bartender (that’s how he prefers to be referred as, not mixologist), who graciously recommended two drinks – Chinatown Mojito and Heard It Through the Grapevine – from the extensive but not overwhelming cocktail menu.

Chinatown Mojito (S$24) is made with three-year-old Havana rum, Myers Dark rum, fresh lime juice, mint and rosemary syrup, a splash of soda and for that extra twist, a reduction of apple. The hint of apple made it stand out from a traditional Mojito and complement the slightly smokey taste of the rum perfectly. 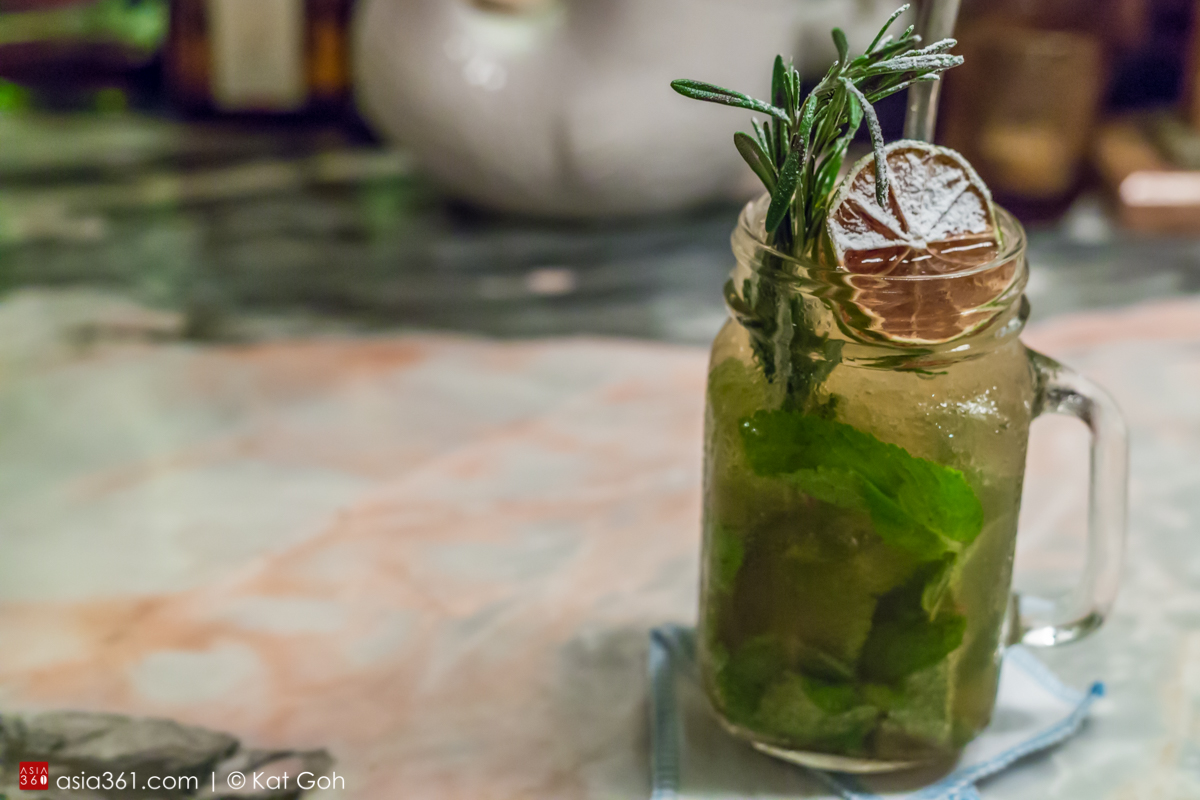 Chinatown Mojito is a refreshing concoction of three-year-old rum, Myers dark rum, fresh lime and apple juices, mint and rosemary syrup and a splash of soda.

Heard It Through the Grapevine (S$26) is a concoction of G’vine Floraisson gin, lemongrass and ginger syrup, lemon, citrus bitters and ginger beer. The taste of the gin was masked by the citrusy combination of flavours, but this drink sure packed a punch! Irwan pointed out to us that the gin used in this cocktail is made from grapes instead of the usual botanicals like juniper or liquorice, which, in my opinion, masked its flavour and could easily have passed the drink off as a citrus mocktail. 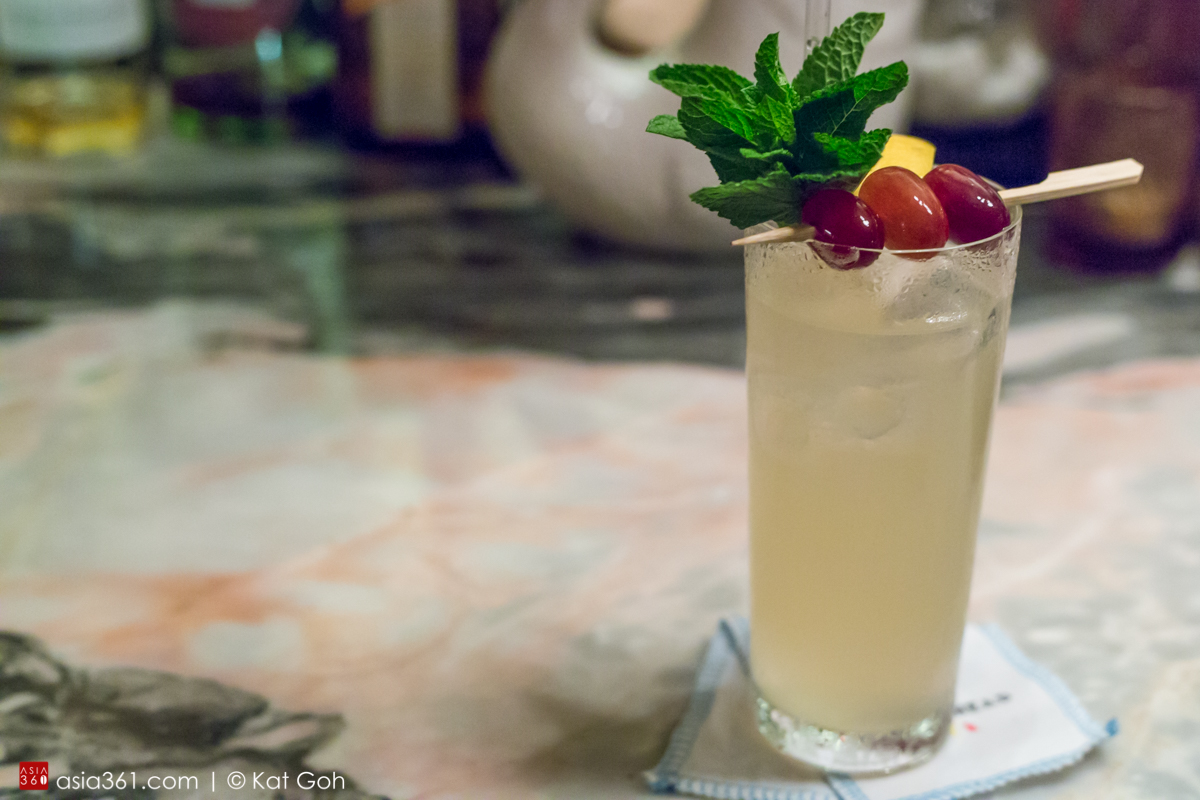 Heard It Through the Grapevine, which entails G’Vine Floraisson gin, lemongrass and ginger syrup, lemon, citrus bitters and ginger beer, is easy to drink, even for those who do not like alcohol.

Operations Manager Tron came along and recommended their bestseller at the recently concluded Singapore Cocktail Week called Cherry Pop, which was not on the menu. Cherry Pop is a relatively simple mix of Plymouth Sloe gin, Cointreau with a splash of pineapple and lime juice.

Cherry Pop was specially created for the Singapore Cocktail Week, but might just be featured on the menu in future.

Irwan made a couple for us to sample — the pineapple and lime juice nicely balanced out the liquorice flavor of the gin and Cointreau. The drink was a tad too sweet for my taste, but I’m sure those with a sweet tooth would be able to appreciate it more.

The attentive and obliging staff, coupled with the whimsical décor, made our night at Studio 1939 a truly wonderful experience. The cocktail menu features just enough items to pique the interest but is not be overwhelming for the uninitiated. I’m already looking forward to my next trip to the whimsical cocktail bar at the corner of Keong Saik.

Foodie. Drinker. Dreamer. Superhero-wannabe. Mark is also a lover of travel and wants to put his fledging knowledge of photography for the greater good of mankind. Meanwhile, he is crossing his fingers for the time machine to be invented before his time on Earth is up.