What's On
You are at:Home»Promotions»GIVEAWAY: 2D1N Staycation at ibis Singapore on Bencoolen
By Fen Chia on June 14, 2015 Promotions, Singapore, Travel

ibis Singapore on Bencoolen is a hotel that enjoys an excellent location in Singapore’s city centre, within walking distance from Bugis and the central civic district, and the East-West (Bugis station) and Circle (Bras Basah station) train lines.  I was looking forward to my staycation, having had fond memories of ibis during sojourns in France, where that red sign can be found everywhere, signalling a convenient and affordable stay. 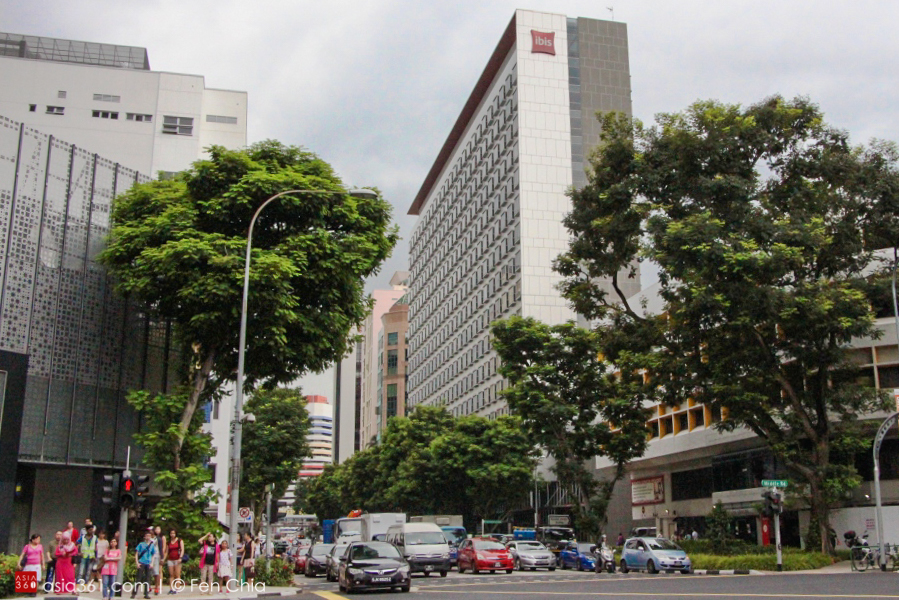 Similarly, ibis here prides itself on being an ‘economy hotel for business and leisure’ in the AccorHotels group, of which its other brands in Singapore include the luxury hotel Sofitel So, Singapore Resort and Spa on Sentosa, Grand Mercure Roxy and Novotel Singapore Clarke Quay.  The ibis at Bencoolen is one of two here – the other being in Novena.  Another ibis hotel will be up later in 2015 in the Macpherson area of Singapore, which hosts a rapidly growing light industries hub. 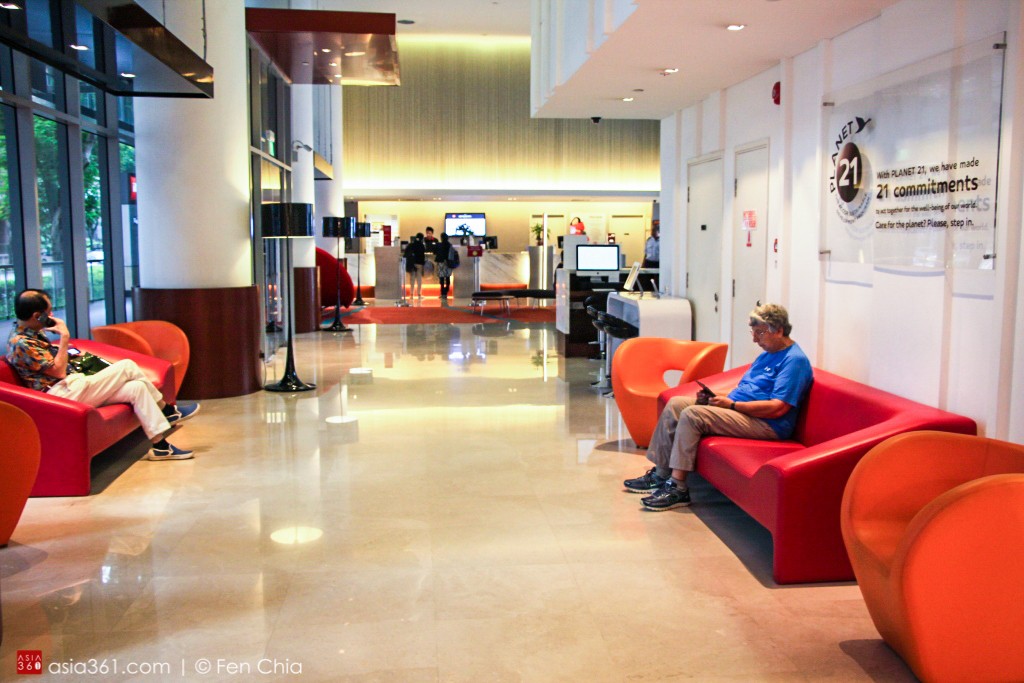 I was amazed to hear from duty manager Eugene that there are a whopping 538 rooms in this hotel as the building did not look huge from the outside.  Every room (about US$130 on Agoda) has a similar layout, except for a number of ‘Benefits’ rooms which cost slightly more (about $17 difference ) upon booking. 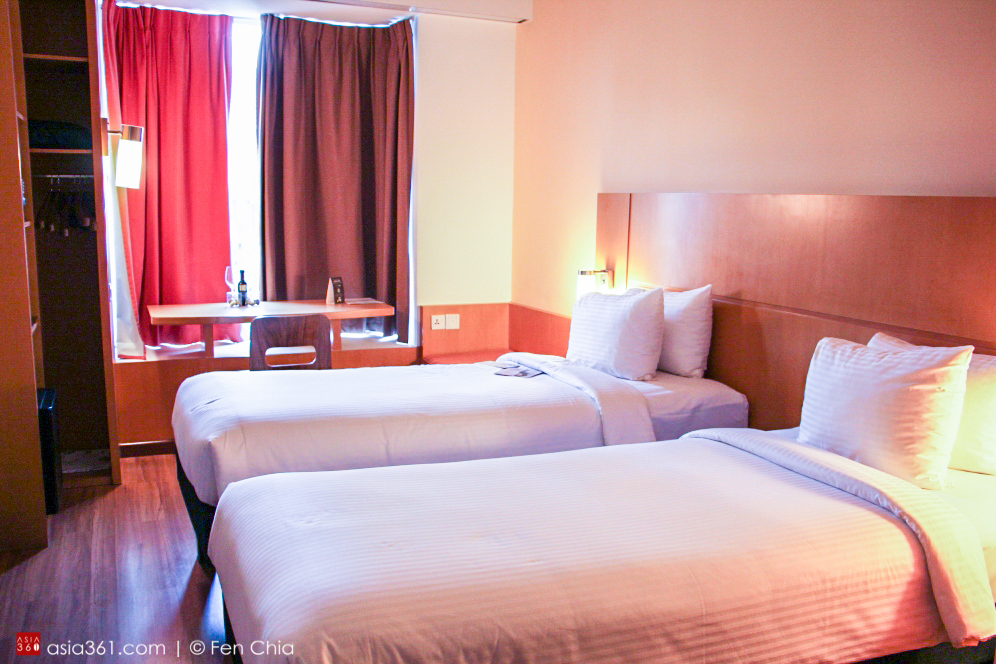 Room in the signature orange-red hues of ibis.

My room was one of these ‘Benefits’ rooms, which comes with added perks such as access to a nearby California Fitness gym at Bugis including classes like yoga and zumba, a late check-out up till 4 pm and most interestingly, a ‘Handy’ smartphone in my room. The latter is a great service as it offers unlimited free local and INTERNATIONAL calls to 27 countries – a first-ever experience for me, which is ideal for those who need to plan ahead for the next leg of their holiday. The room is simple and functional, with free wi-fi, coffee and tea making facilities and a shower for the bathroom.  They may not be luxurious, but the ‘sweet bedding’ was extremely comfortable and there were ironing facilities and a working desk next to the window, which makes the hotel also suitable for business travellers.  My only gripe was that the TV was small and not HD, but I’m probably one of the few people nowadays who still depend so much on the goggle box. 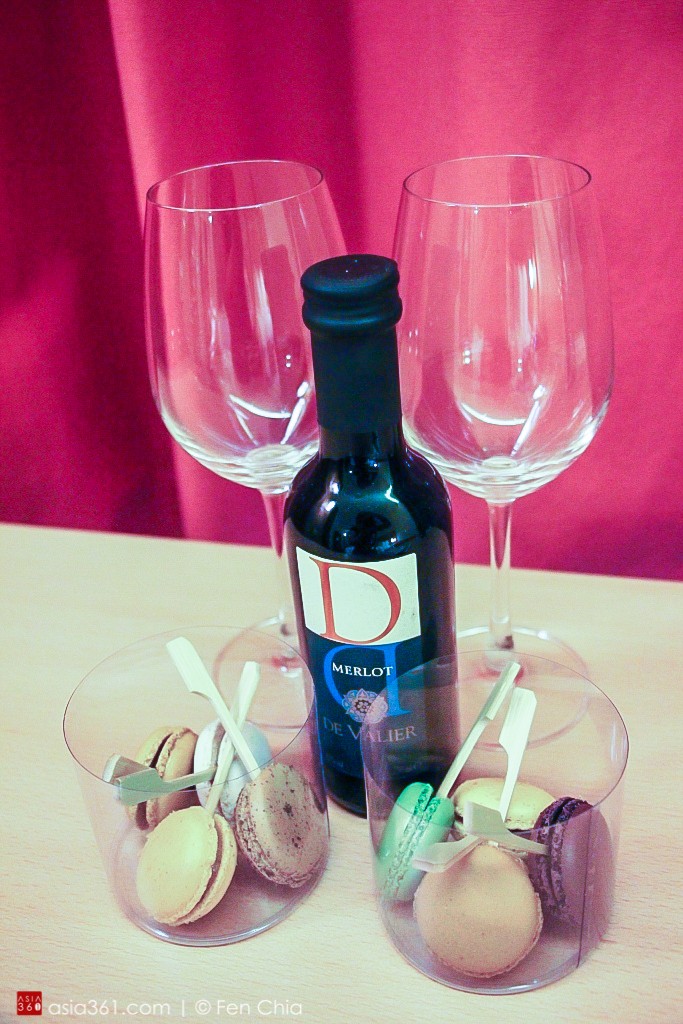 To juice up your gadgets, there is a USB charging point in addition to the regular power points. ibis offers a ’15 minutes satisfaction guarantee’ – if you have a problem with your room which clouds your stay, staff will come up with a solution in 15 minutes, otherwise that service will be on the hotel.  I did not have the chance to try that out though, for I encountered no problems with my stay. While there is no room service, guests can order from the menu of the hotel’s in-house restaurant, TASTE, and pick it up to go when the food is ready.  TASTE is also where the buffet breakfast is served, and where there is a bar with a TV.  The prices of the standard local and western favourites are extremely reasonable – in fact, my friend had previously introduced me to TASTE on a rainy afternoon when we ducked into the hotel and discovered that is where you can get one of the cheapest lattes in town. 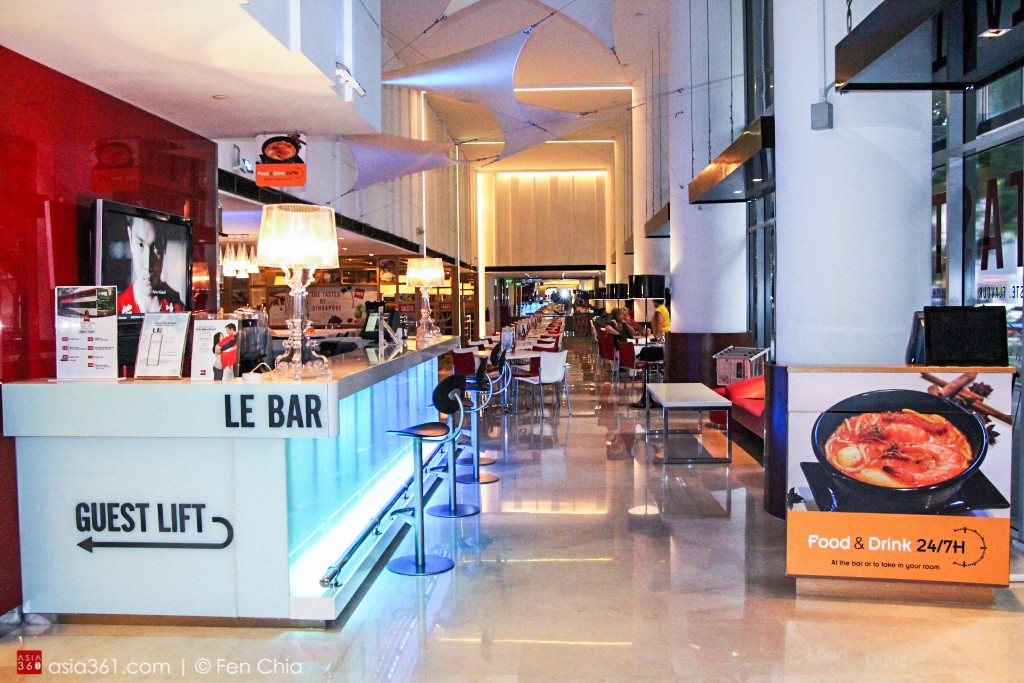 Breakfast was a comprehensive spread — there are even Indian and Japanese selections like idli and chawanmushi respectively, in addition to the local and western fare.  Even if you can’t make official breakfast hours, you can look forward to drinks, cakes and pastries from 4 am to 6 am and 10 am to 12 noon. 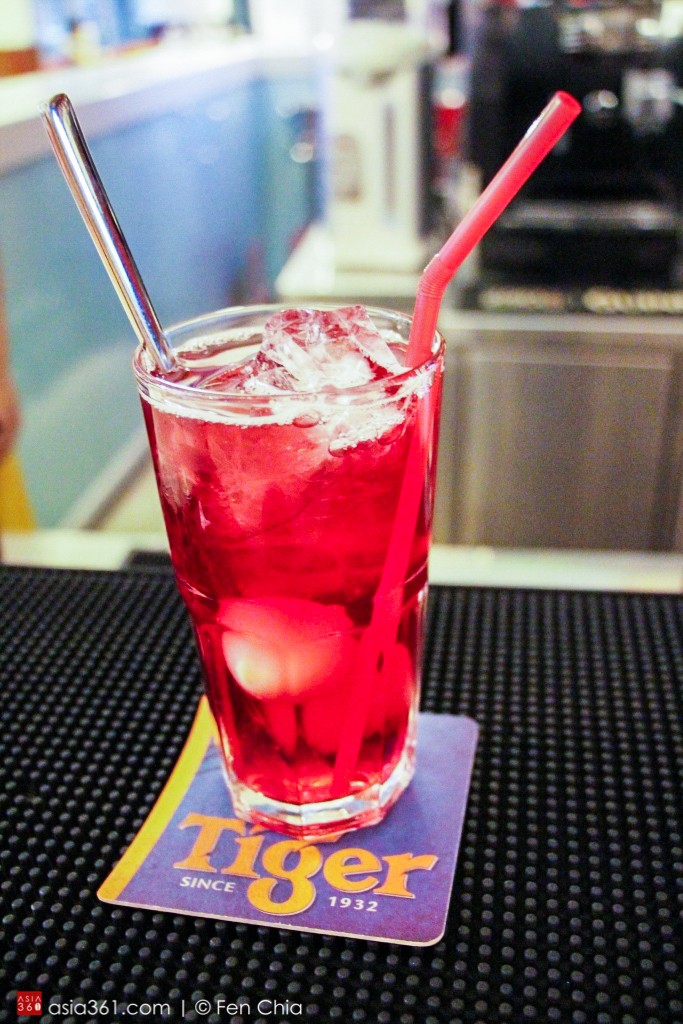 The ‘ibis mocktail’ is a mix of cranberry juice, sparkling water and lychees.

ibis features a “Monscierge” screen in the lobby which offers recommendations on nearby attractions, airport flight schedules and amenities. 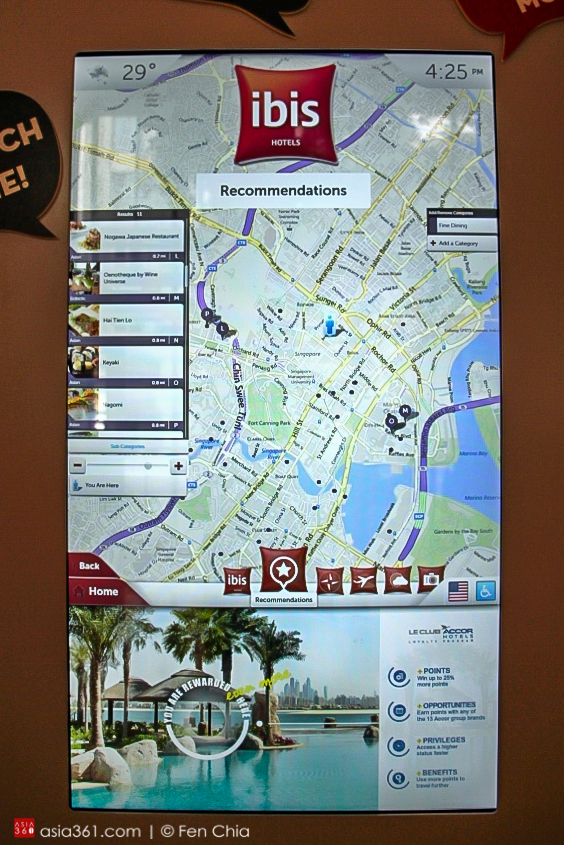 For those without their own gadgets, there are two Mac computers and a tablet in the lobby for use.  There is a printer too, so no worries if you forgot to bring along that airline e-ticket. 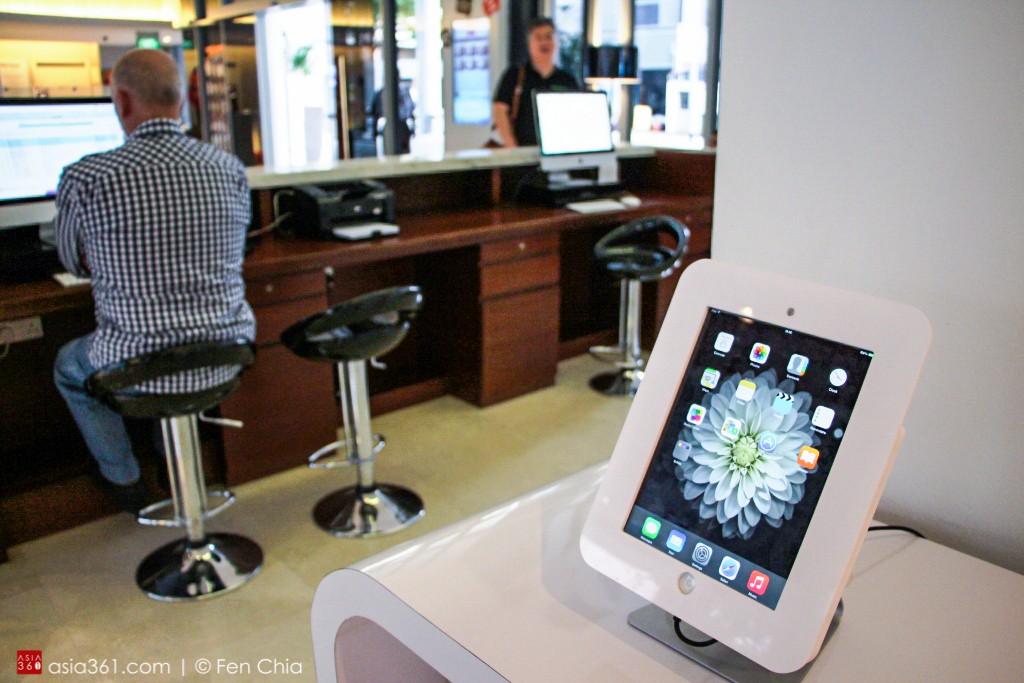 The hotel also offers a range of bamboo bikes for you to explore the area, on a first-come-first-served basis.  Why not bike to the California Fitness gym at Bugis?  If you are feeling lazy, the Hippo tourist bus happens to stop outside the hotel too. 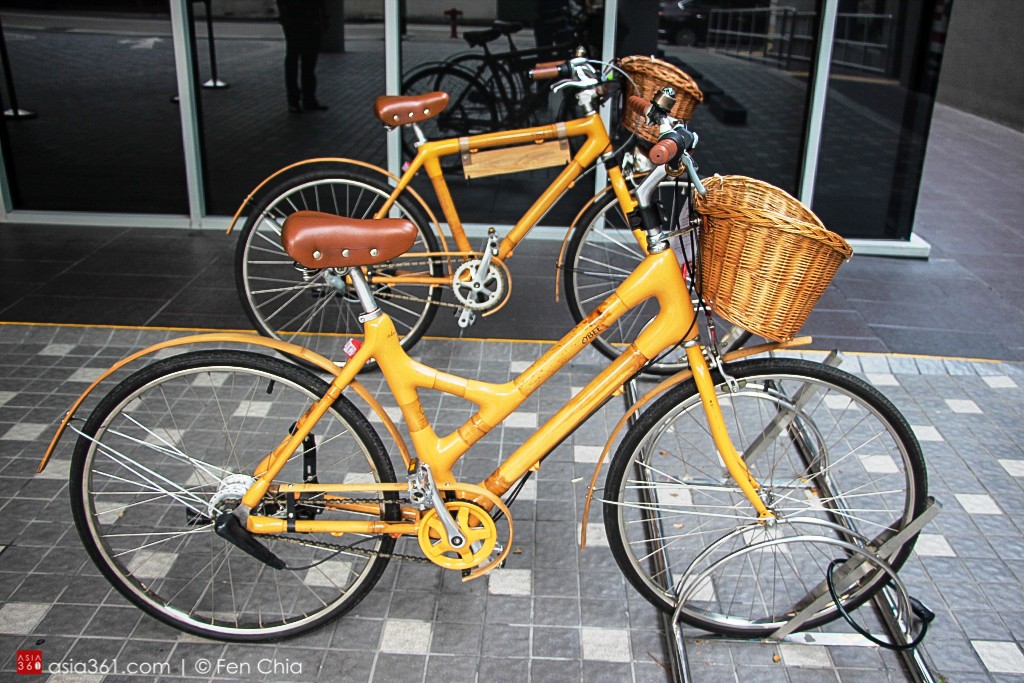 For yours truly the media junkie, what I appreciated most was the hotel’s subscription to the ‘PressReader’ service, of which I downloaded an app which allows access to over 2,300 publications.  During my stay, I was happy to download many European magazines which are not available in Singapore for my reading. 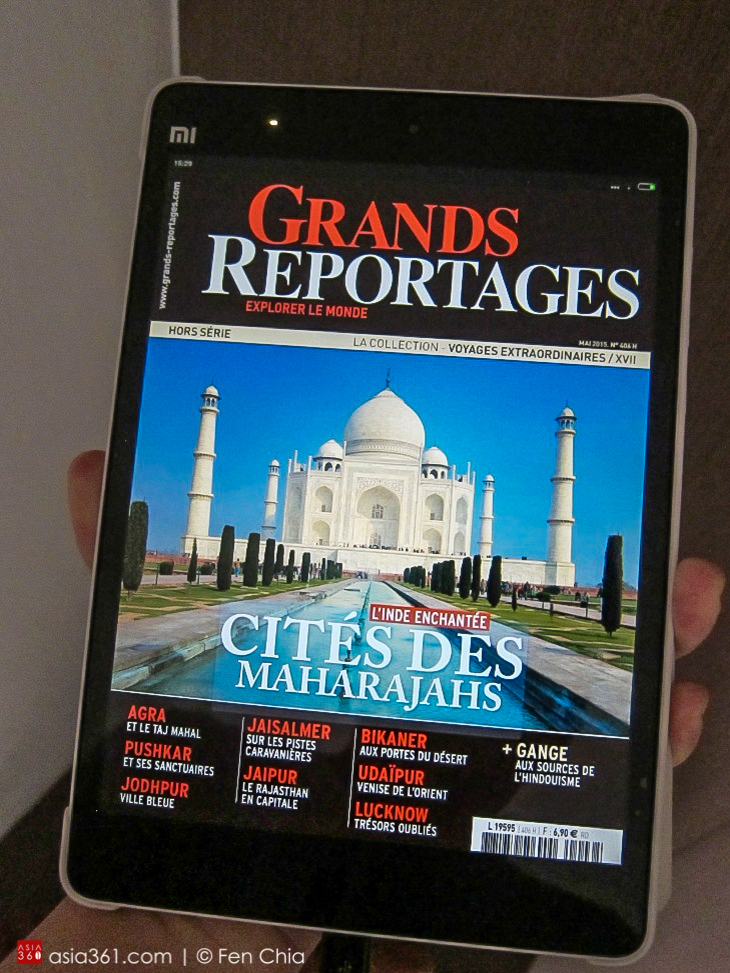 I downloaded many magazines with the PressReader app during my stay.

ibis Singapore adheres to AccorHotels’ ‘Planet 21’ sustainability principles. Although there is an electric water boiler in the room and tap water is safe to drink in Singapore, ibis also offers a “Eco Clean Bottle Program” that allows you to rent or buy (S$12) a glass bottle and get it refilled at any time during your stay at the bar.  Bamboo also features ‘eco umbrellas’ available for rent (free) and the bikes.

The hotel also uses “Ecopens” in collaboration with the ‘A Tree for a Child’ program — basically pens at the hotel are made from used and recycled paper in Indonesia, made by the parents of underprivileged children employed to produce them.  If you think you could reuse your towel in your room, don’t forget to leave it on the towel rack.  For every five towels reused, AccorHotels will plant one tree. 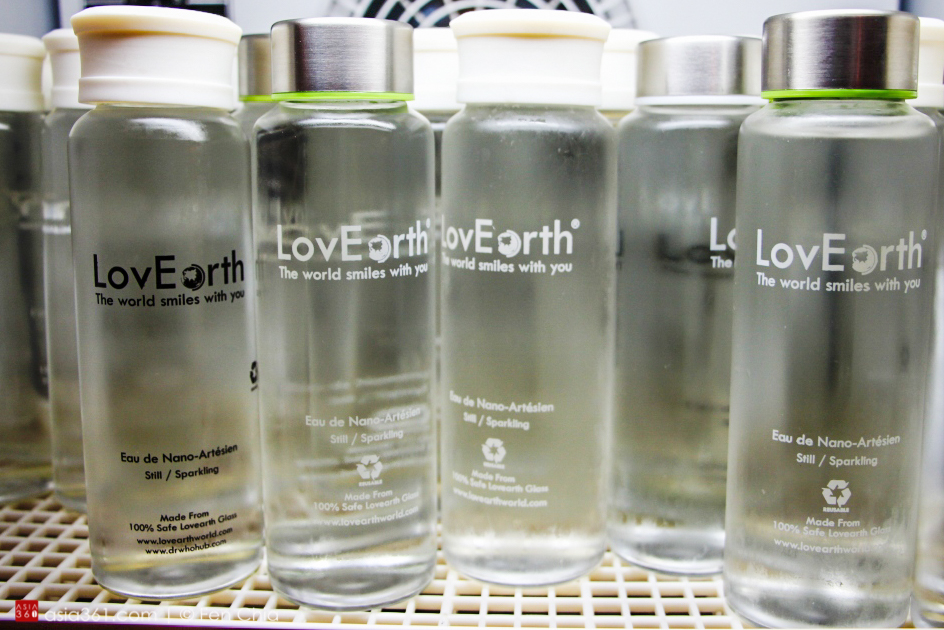 Sparkling or still water? Rent or buy a bottle at ibis.

The star quality of ibis Singapore is its great central location for both leisure and business travellers.  The room was practical and had everything I needed.  I would also recommend it to business travellers given its proximity to the central business district and major convention centres in Singapore which are just a few minutes’ walk or a train ride away.

We are giving away a 2D1N stay at ibis Bencoolen to one lucky reader! To win, simply follow the below steps:

This contest ends on 5 July 2015. The winner will be notified via email. Good luck!