What's On
You are at:Home»Entertainment»Slava’s Snowshow Leaves You Dreaming of a Snowy Winter Wonderland
By Fen Chia on November 4, 2022 Entertainment, Singapore

I had never been enveloped in snow before. After three years of the pandemic spent in equatorial Singapore, watching the finale of Slava’s Snowshow (hint: it involves a blizzard) left me walking out of the theatre in a dreamlike state covered in ‘snowflakes’ and wishing for a winter wonderland this festive season. Could an adult be so stirred by a show about clowns? There is a lot of ‘snow’ in this snowshow-especially at the end. Photo credit: Veronique Vial.

My recent experience proved that Slava’s Snowshow show, ongoing at Marina Bay Sands until 13 November 2022, is not a show only for kids, but is a visual treat that everyone will enjoy. Launched in 1993 by Russian professional clown and Cirque du Soleil alumnus Slava Polunin, this timeless tribute to clowning is full of antics and surprises for the audience.

To be honest, the first clowns that come to my mind in pop culture are not cheery, while clowns are not usually the most memorable among the stunts and spectacle of a circus. The ‘clowns’ I first think of are the sinister Joker and Pennywise from Stephen King’s IT. Polunin’s choice of career and successful staging of his long-running, award-winning show is commendable as it takes quite a bit to centre an entire show on a figure infamous for buffoonery and absurdity, if not horror movies! 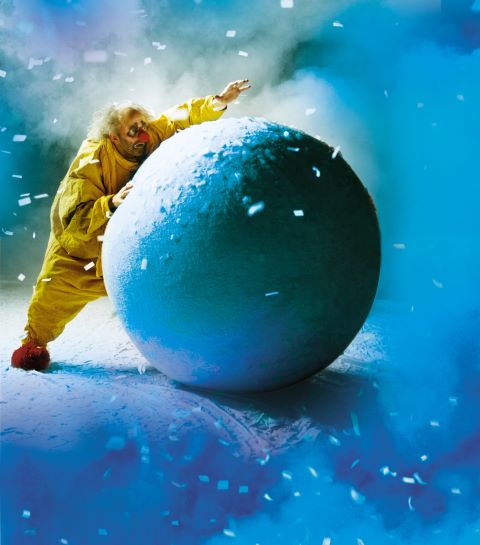 Not all is bright and cheery in this show, as is life for clowns and for us. There are two main clowns here, well two types, but one yellow clown and many green clowns. The yellow clown seems to be taking a series of solo journeys.  He is mostly forlorn and melancholic, as is the lighting and some dark sets and accordingly suspenseful soundtracks, but his existence is peppered by appearances of the bumbling green clowns whose presence and silliness (that is relative!) bring out even more of his exasperation and annoyance that run the gamut of emotions, to the even greater delight of the crowd. 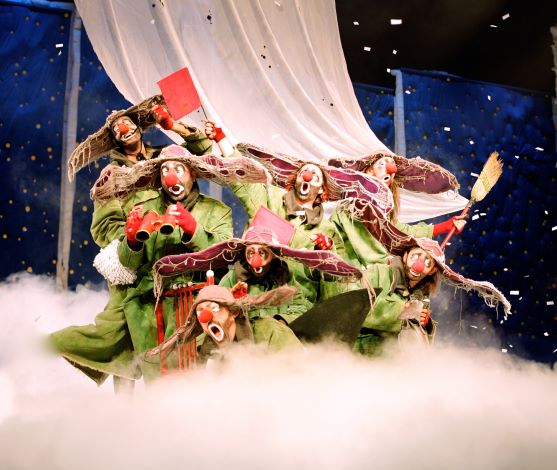 The green clowns come across as bumbling and silly and annoy the yellow clown a fair bit. Photo credit: Veronique Vial.

Is what I thought of the story similar to what the appreciative kids around me understood? That is not clear, but it does not matter. The most interactive parts of the show-like when giant web of cotton unfurls across our heads and all of us help to stretch it into a soft, tangled mess-leave the audience, kids or non-kids, all enthralled and squealing, before the intermission comes along and we can extricate ourselves and tidy our hair. 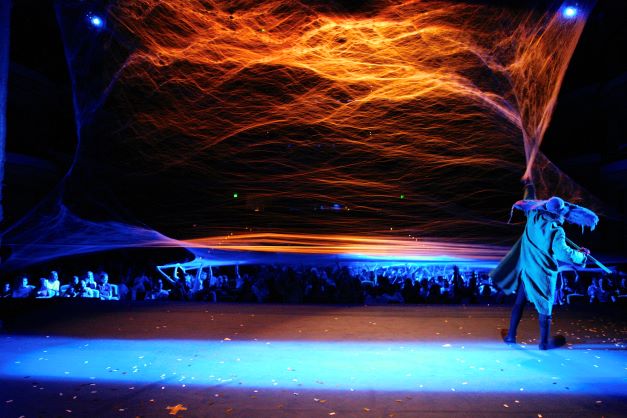 A giant cobweb unfurls over the audience, which helps to stretch it across the theatre. Photo credit: Andrea Lopez.

There are also other precious moments where people get light showers of blessing, sprayed with ‘snow’ periodically and even ‘kidnapped’ on stage. Some of these interactions are undoubtedly adapted to each country and theatre conditions-such as end of intermission, when a green clown expertly walks in his giant shoes on the top of our seats to the back of the hall, as some of us lend him a hand, while I have seen pictures of a clown dangling from balconies in overseas theatres. The clowns, masters of mime, also respond accordingly and improvise to different situations and interactions, especially to the vocal kids near the stage. They even ‘glared’ disapprovingly when some audience members filtered in late.

The sets are relatively simple (i.e. nothing high-tech like some musical productions) and made of brightly coloured fabrics, such as two memorable giant plush telephones. Somehow, however, it worked to give me a warm and fuzzy feeling about the whole experience, like this was a snuggly, hygge fantasy that I could wrap myself in (other than the missing hot chocolate because drinks are not allowed in the theatre) for one evening while I stayed away from the hardness and harshness of my phone and laptop. 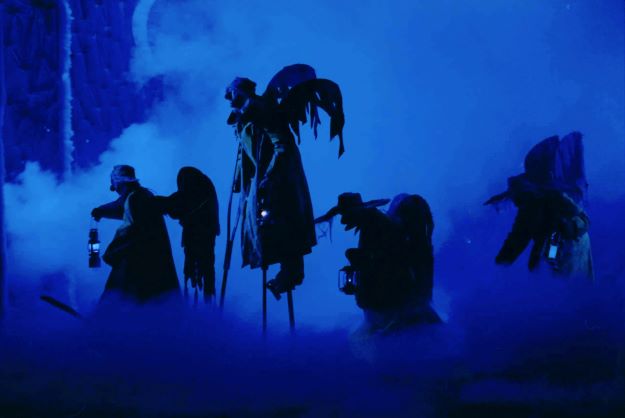 One of the more forlorn moments that add a sense of realism, that clowns do not just clown around. Photo credit: Veronique Vial.

Whatever melancholy there may be, this snowshow has a happy ending. After the ‘snow’ blizzard finale, the entire theatre gets filled with huge balls of different colours and sizes that bounce all around the hall. Adults and kids alike delighted in the fun, pushing the balls from the front to the back again, creating a healthy and friendly dose of interaction among us strangers.

When it came to time to leave, there were still many lingering, their children still revelling in the fun and unwilling to go home, a finale that probably made the whole experience unforgettable. As I walked to the exit, I stole a glance at the clowns, standing and taking in all the action from the stage, proud of this magical memory they had created for the audience. 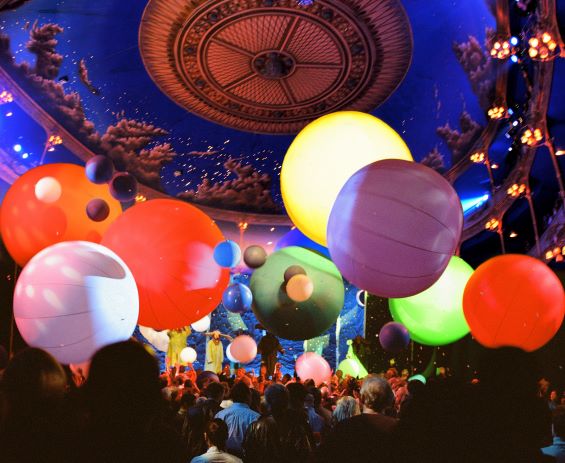 Giant balls and balloons bouncing across the audience after the show. Photo credit: Veronique Vial.

Slava’s Snowshow runs from 2-13 November 2022 at the Sands Theatre. Tickets start from S$68. Note that front seats are likely to get the most interactive experience.