What's On
You are at:Home»Eat & Drink»Mrs Pho Goes to Town With New [email protected] Outlet and a Luscious Premium Pho
By Fen Chia on May 4, 2021 Eat & Drink, Singapore

Popular Vietnamese restaurant Mrs Pho has opened its latest outlet at [email protected] — with a pho-nomenal pho like you’ve never had before. Take it from me because I’m not usually a pho fan, but the restaurant has gone to town with its new offerings.

While the new outlet does feature many brand new dishes not found at the other locations, there are also updated recipes of classics. This new Premium Short Rib Pho (S$19.90) is one of them.

I have a heavy palate and usually find Vietnamese beef noodles soup too light for my liking. So, my visits to other Mrs Pho restaurants have found me always going for its crab and prawn noodles or dry noodles instead. The mere sight of the new Premium Short Rib Pho made me waver and question my loyalties. 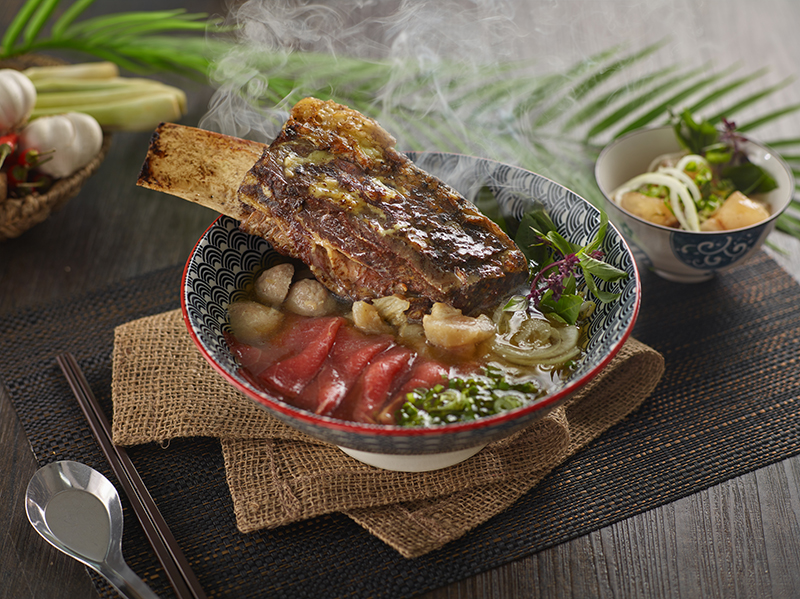 The price is vindicated by a huge hunk of a 36-hour sous vide short rib marinated in a special spice rub. The beef was deliciously fall-off-the-bone tender, accompanied by beef balls, tendons and beef slices. This Premium Short Rib Pho really got me thinking about pho in a totally different way. Now, when I’m on a carnivorous or soup craving, the Premium Pho and its huge rib appears in my mind, blanketing my usual steak and ramen thoughts.

The next beef dish I tried was Grilled Beef La Lot (S$5.90), which is also available at the Rangoon Road outlet. However, this version I had has been changed slightly with the addition of vermicelli, lettuce and pickled vegetables. It was my first time trying this starter of minced beef wrapped in betel leaf, served with lettuce, pickled radish and rolled up rice noodles. It would have been a great starter if not for the fact that the beef was a tad greasy. In any case, if you are already ordering beef pho as your main, choose the Mountain Style Grilled Chicken (S$7.90) as a sharing plate instead. Where fried food often masquerades as ‘grilled’ in indoor restaurants, I loved the smokiness of the meat which I told myself tasted like BBQ. It turns out the meat, marinated with spice mix rub, was cooked sous vide and left tender and juicy. I never knew this ‘under vacuum’ cooking method could make meat taste like it has just been cooked on an open fire in front of me. 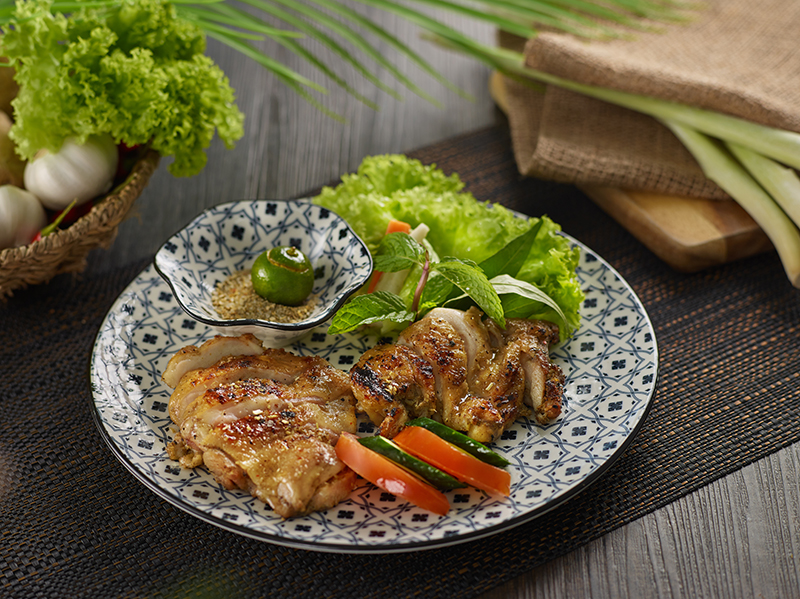 Another favourite of mine from Mrs Pho’s other outlets is the Stir-Fry Crab Meat Noodle (S$16.90 large, S$10.90 small), a wok-fried vermicelli with slivers of fresh crab meat. I liked the wok hei that the dish managed to give off despite being prepared in a relatively small space — wok hei done indoors in a small kitchen is no mean feat. The Caramelised Pork Belly and Shrimp in Lemongrass Perfume (S$13.90) is a crowd pleaser that features a charred pork belly that will go down well with an order of white rice. 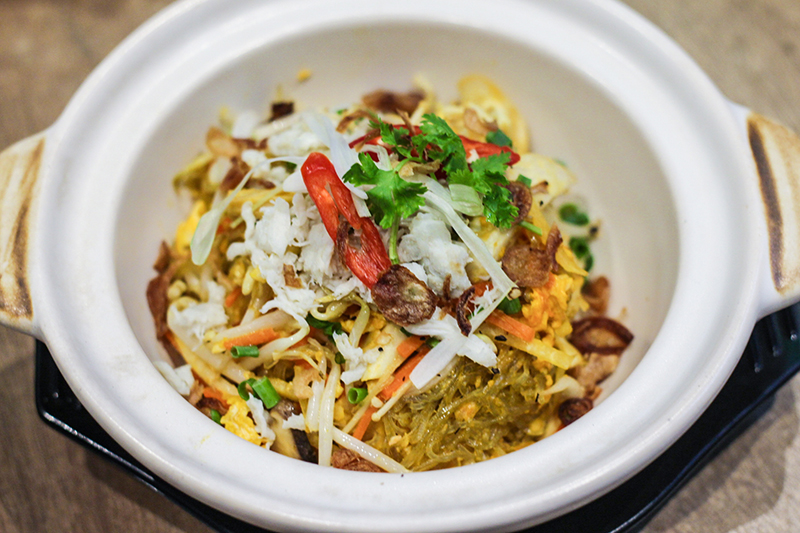 As these two dishes were again, a bit on the greasy side, I would go for the small portion as a sharing plate. And for balance, do also get the Claypot Eggplant with King Oyster Mushroom (S$8.90), a sizeable portion of eggplant in oyster sauce with the large pieces of firm, juicy mushroom.

The new Mrs Pho outlet also represents its venture into offering more desserts. While I have enjoyed the avocado and coconut smoothies and Vietnamese drip coffee at other outlets, those are liquid-based. The new dessert menu offers a French touch with Crème Caramel (S$3.90) and the luscious Marou Chocolate Mousse (S$7.90), made with chocolate from Marou, an artisan chocolate maker that uses superior quality, hand-picked beans from Tan Phu Dong, a skinny strip of island in the Mekong Delta.

Marou’s chocolate has gained international repute for its complexity and variability because of its control from source to bar, resulting in chocolate with unusual aromas depending on the beans’ maturity. I do not have a sweet tooth but I enjoyed the mousse so much that I could finish every bit of it, despite the sizeable portion! It was rich and creamy and yet not overly sweet. 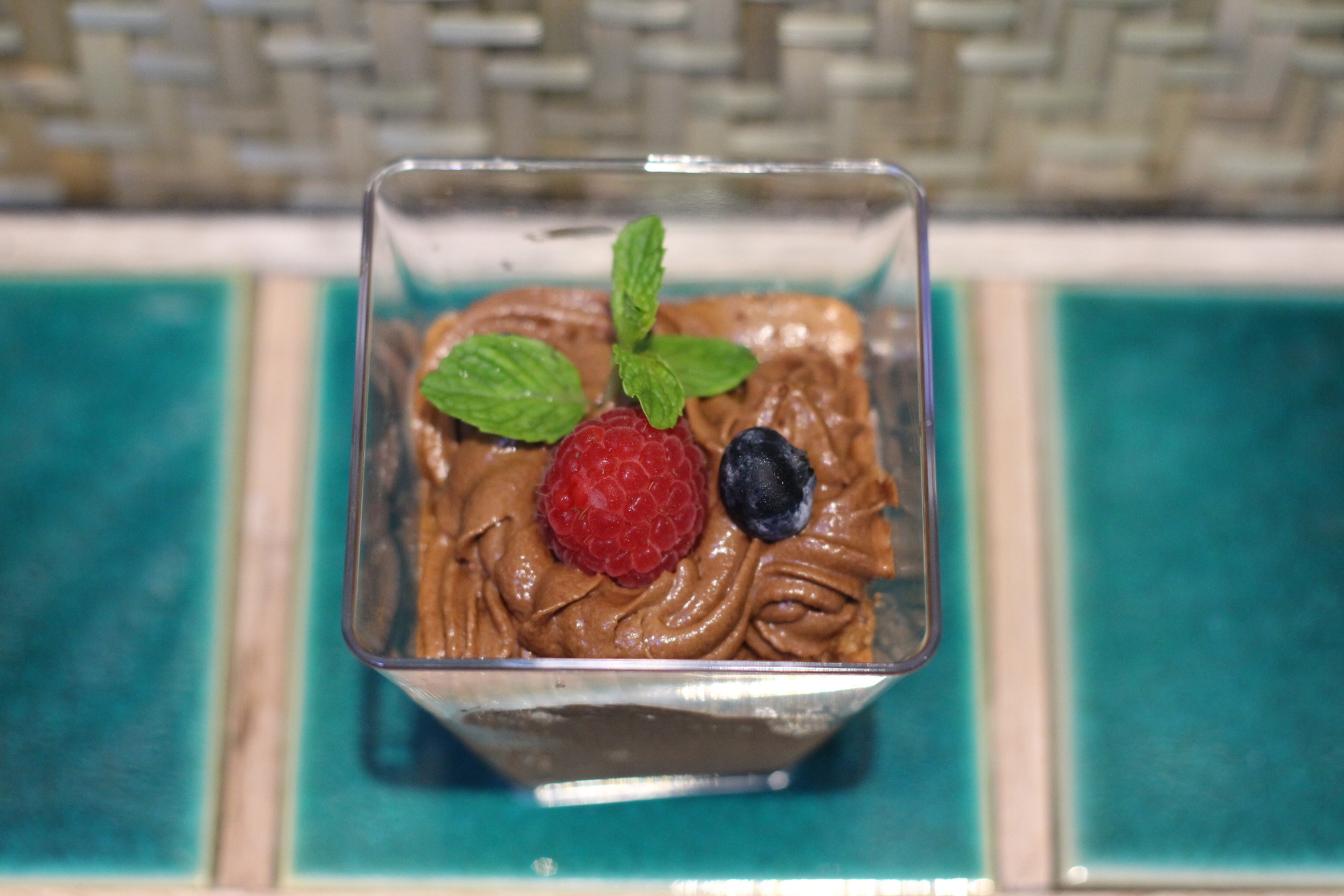 The challenge would be securing a spot at the small seating space of Mrs Pho, which was bustling in its first week open at [email protected] Fortunately for my intentions to go back there mainly to attack the Premium Pho, there is a small row for solo diners. Grab a seat, if you can.