What's On
You are at:Home»Automotive»For a Sustainable Future, One Car at a Time
By Cheryl Yeoh on March 12, 2019 Automotive, Singapore

Christopher Wehner, Managing Director, BMW Group Asia, officially handed over the keys of a new BMW 530e to Ms Margriet Vonno, Ambassador of the Embassy of the Kingdom of the Netherlands to Singapore, earlier this month.

“2018 was the year of Climate Action in Singapore. Therefore, on behalf of the Embassy of the Kingdom of the Netherlands, I pledged to do my part to improve the environment by choosing a plug-in hybrid electric vehicle, the BMW 530e, as our official Embassy car,” said Ms Vonno.

She added that since her travels are less than 30km per day, an electric vehicle made perfect sense for her daily needs. “It’s remarkable to know that 90% of my trips can be completed solely on electric power, and in a comfortable and well-designed vehicle,” as said by her. 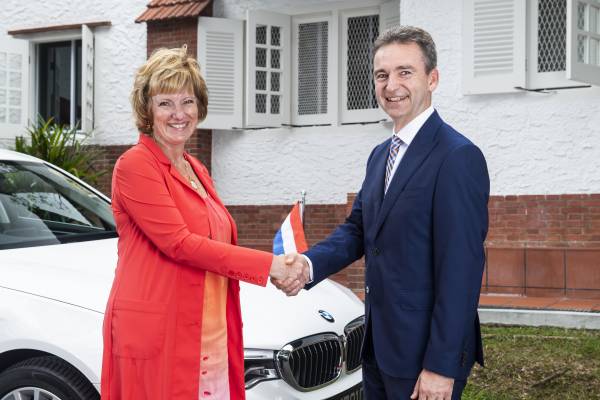 According to an article by gocompare, it is found that the Netherlands has one of the highest market shares worldwide of electric vehicles and now has the highest number of charging points per 100km with 23.25 charging points per 100km. “Similarly, I believe the local charging infrastructure in Singapore will develop as adoption of electrified vehicles increases,” said Ms Vonno.

“Once the infrastructure is further developed we hope to use a fully electric vehicle here. In the meantime, I’m proud that we’re in a position to inspire positive change and can be an example for others to follow.”

“It’s an honour to support Ambassador Vonno’s vision of a cleaner and greener environment in Singapore,” adds Mr Wehner. “BMW continues to lead the way in electrification with more than 300 electrified vehicles on Singapore roads today. We hope Ms Vonno’s actions will raise awareness of the benefits of sustainable mobility and will encourage more people to take the leap into the world of electrification.”