What's On
You are at:Home»Countries»Taiwan»Running a Half Marathon in a Grade 10 Wind at Penghu
By Contributor on November 28, 2017 Taiwan, Travel

It’s 6am. Here I was on an island named one of the “world’s best secret islands” by Lonely Planet. No, I was not having a secret getaway. I was, in fact, standing at the start line of the inaugural Gaillardia Island-Penghu Cross-Sea Marathon 2017, together with 1,523 fellow participants from all around the world, including 2017 San Francisco Marathon winner Jorge Maravilla from the United States.

The race was broken into three categories – 42km (full marathon), 21km (half marathon) and 5km. I decided to take a more conservative approach and run the 21km. The usual pre-race mass warm-up did not take place due to the exceptionally strong wind. Despite that, all the runners, including myself, were in high spirits and ready to race, although I had to admit being slightly apprehensive about the strong winds.

At 6.30am, with the starting gunfire and a few coloured powder shots, we were flagged off! The full and half marathon runners ran, followed by the 5km runners a few minutes later.

The starting point began at Siyu (西嶼) Western Fort, the second largest island of Penghu. It took runners to the extreme west end of Siyu before looping back to the start point where the 5km runners were to finish their run. This was the only loop in the race for the full and half marathon category where the runners would then head back to the main island Penghu cutting through villages, beautiful bays and crossing the trans-oceanic bridge. The entire route was generally downward sloping, with a few upward ones winding along the beautiful bays. 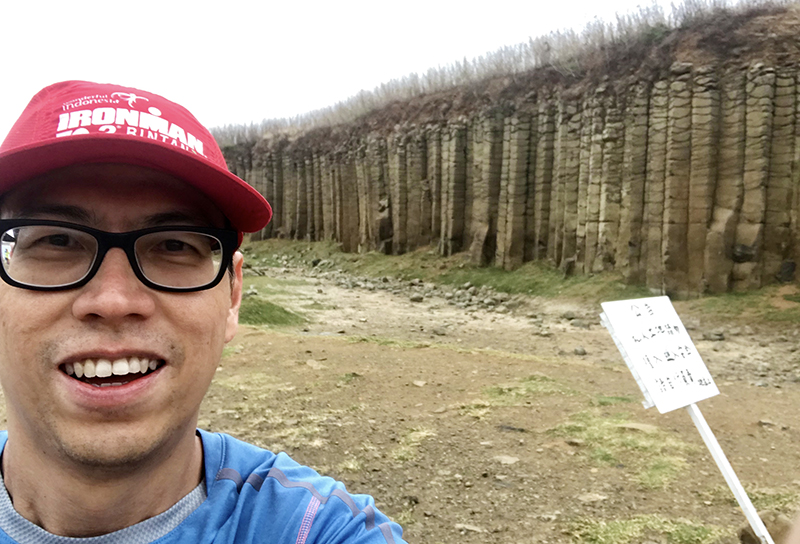 A selfie shot with the famous basalt columns of Penghu, which we ran past in our route. Photo: Ben Wong

Official aid stations were nicely spaced out. Some running clubs even had their own “luxury” support stations for their runners. One station that caught my attention was at around 15km mark set up by a group of seniors from a local village. The elders cheered us on passionately and their cheers made me feel warm on the inside, in spite of the strong howling wind. 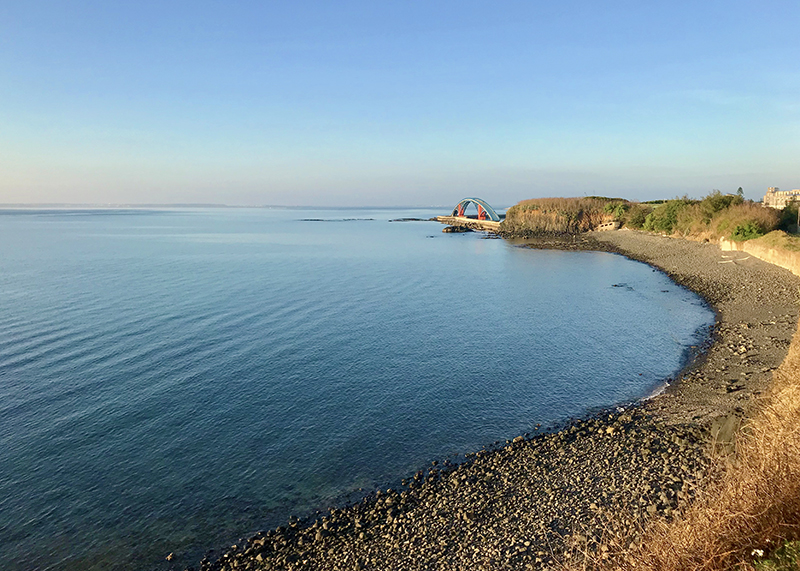 Penghu has more than 300km stretches of the bay. Photo: Ben Wong

Penghu is a member of the Most Beautiful Bays in the World club, a UNESCO-supported Non-Governmental Organisation (NGO) tasked with promoting natural marine bays. It has some 90 islands with more than 300km stretches of the bay. On a good day, I could picture myself doing a nice breezy run whilst admiring the views of the beautiful bay. But on this particular morning, I was running head-on against a Grade 10 wind. It did not help that the initial 5km was showered with cold drizzles of rain.

Sights of runners’ caps being blown away and runners clipping their own feet were common throughout the run. In face of the strong crosswind, I had to remind myself to take shorter strides or else my rear foot would clip the front. At the last 3km of the half marathon and to the midpoint of the full marathon crossing the Penghu Trans-Oceanic Bridge at Baisha (白沙), the wind was at its strongest. It was so forceful that my pace dropped by nearly a minute. One of the local groups cheers the runners on with drums at the Trans-Oceanic Bridge. Photo: ben Wong.

I suggested to a local full marathon participant running alongside me that we take turns to “break the wind” instead of running abreast on the bridge. After crossing the bridge, he joked that I’m a lucky guy to be caught in such strong wind for my first event in Penghu, considering that Penghu typically gets such wind speed only in the December and January period. I replied, “This is indeed the Penghu “Typhoon” Cross-wind Marathon for me!”

To put this in perspective, Jorge Maravilla finished the race as the champion at 2:43:07 — definitely not one of his fastest races. The strong wind had such a great impact. Later, I heard from a full marathon participant that the second half of the race was less windy as compared to the first half. Tough luck for me.

Overall, it was a great experience. The run was well-organised and I made a lot of new friends. Would I do it again? In a heartbeat. 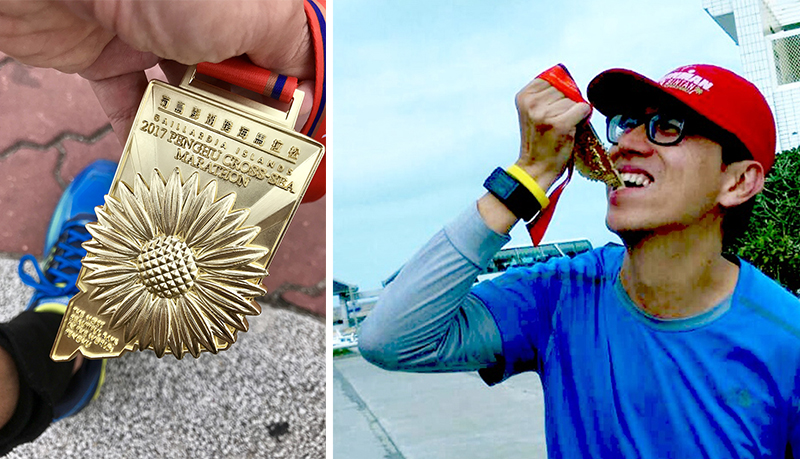 I’m proud to have run the race. Photo: Ben Wong.

How to get there

This article was written by Ben Wong.