What's On
You are at:Home»Travel»Tromsø: The Northernmost City in the World
By Katherine Goh on November 19, 2017 Travel

Travellers often seek the same tried-and-tested destinations. Thus, people usually go to Lapland, Finland or the almost-clichéd Iceland to see the Northern Lights, otherwise known as aurora borealis. But do you know there is a city where there is a 90% chance of catching the elusive Northern Lights? 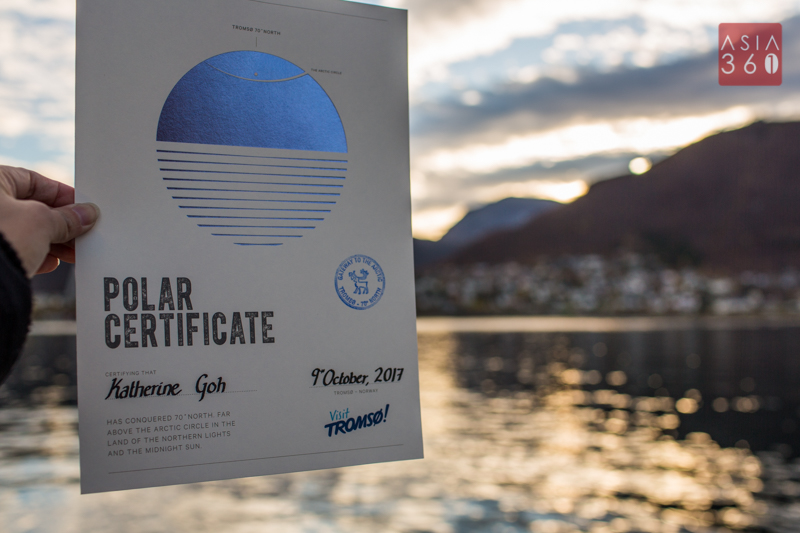 A certificate for our intrepid adventure to the northernmost city in the world. Photo © Katherine Goh

Tromsø is a city in northern Norway. In fact, it is the northernmost city in the world, located 400km north of the Arctic Circle at 69˚N to be exact. It is often called the “Gateway to the Arctic” because the city gets more Northern Lights than anywhere else in the world. As we found out, going off the beaten track proved to be far more rewarding. 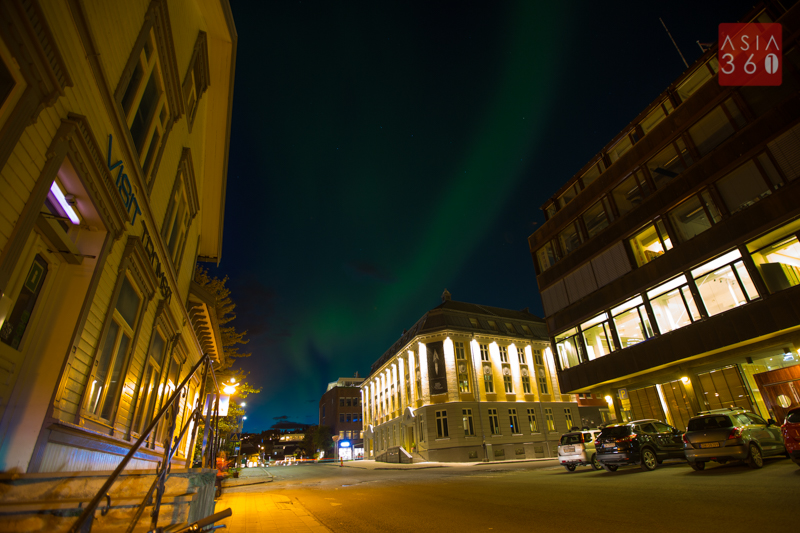 With luck, you might even see the Northern Lights in the town centre of Tromsø. Photo © Katherine Goh.

If you are lucky, you might get to see the Northern Lights in the city (we did!). However, most travellers would head out of the city to darker spots for a better chance of catching the Northern Lights. Our advice is to book yourself on a Northern Lights tour and leave it to the experts rather than attempt to drive on your own. We went with adventure tour specialist Off The Map Travel for our chase of the aurora borealis. 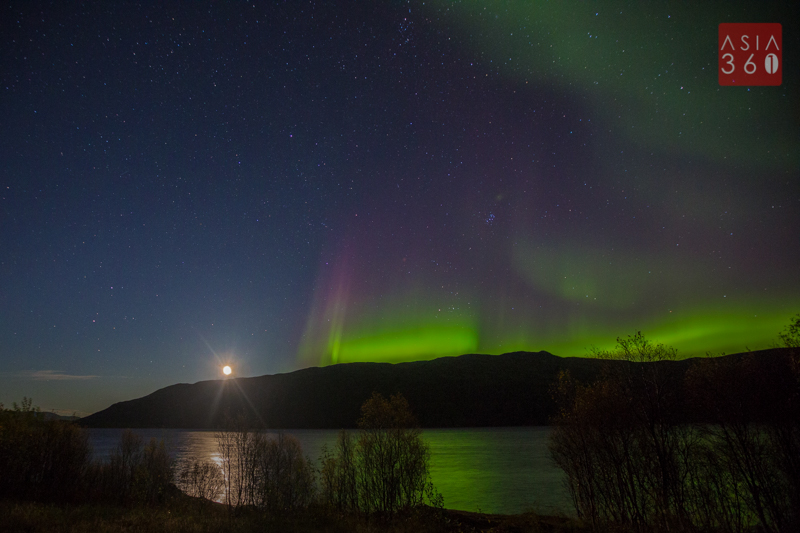 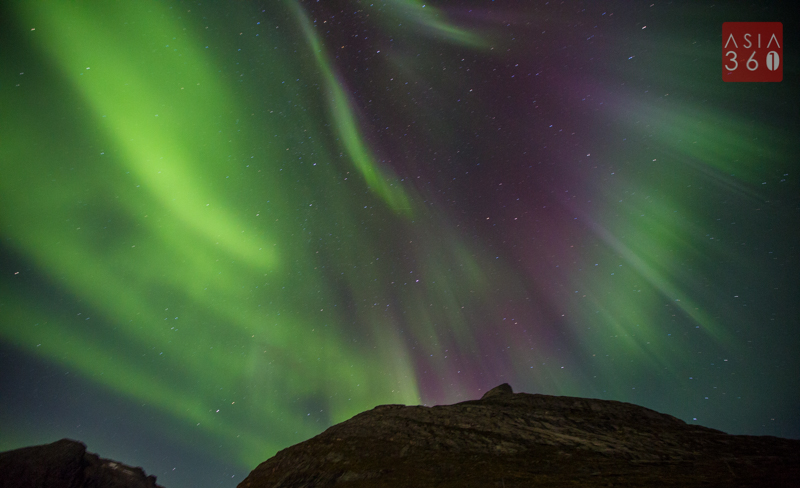 Our guide Stefán – Icelandic by the way – told us that there’s a 90% chance of seeing the Northern Lights in Tromsø, as compared to Iceland which has only a 50% chance. With a 30-minute drive west of Tromsø city, he took us to two spots situated on Kvaløya, or Whale Island, where we caught the Northern Lights in its full glory. We even saw purple Northern Lights, considered to be a rare sight. 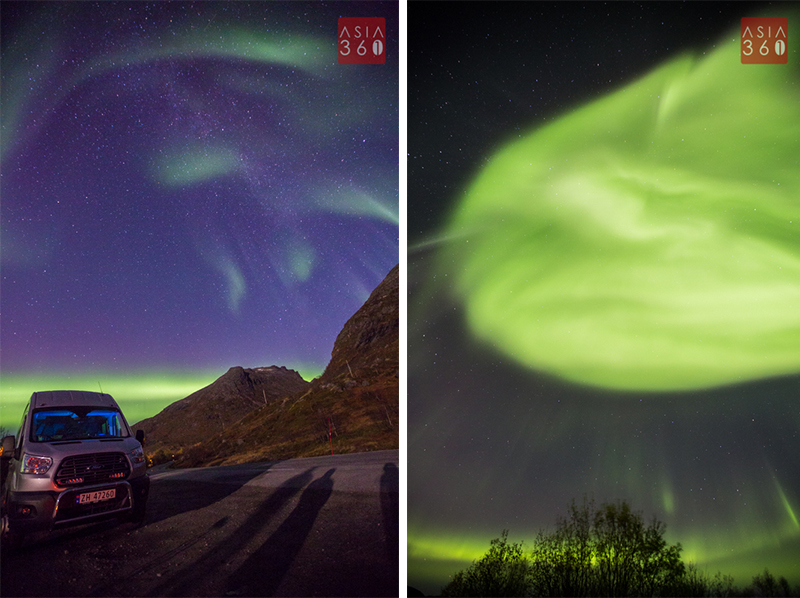 One tip when photographing the Northern Lights: you need a tripod and a camera with manual settings. Your handphone camera ain’t gonna cut it. But fret not if you don’t have a good camera. Our guide Stefán helped us to take some nice souvenir shots!

Leave it to the experts to help you take a nice souvenir shot with the Northern Lights. Photo: Stefán Erlingsson

A Whale of a Time

While it’s true that most travellers who head to Tromsø are there purely for the Northern Lights, the city offers numerous activities to keep you occupied during the day too, one of which is whale watching.

Going with the bespoke itinerary Off The Map Travel planned for us, we got on a once-in-a-lifetime adventure on a high-speed rigid inflatable boat (RIB-boat) in search of humpback whales. Our guide picked us up from Tromsø and drove us to a marina at Skjervoy. The three-hour boat ride started with us putting on goggles, warm floatation suits and boots – all the necessary gear to keep us warm and dry. 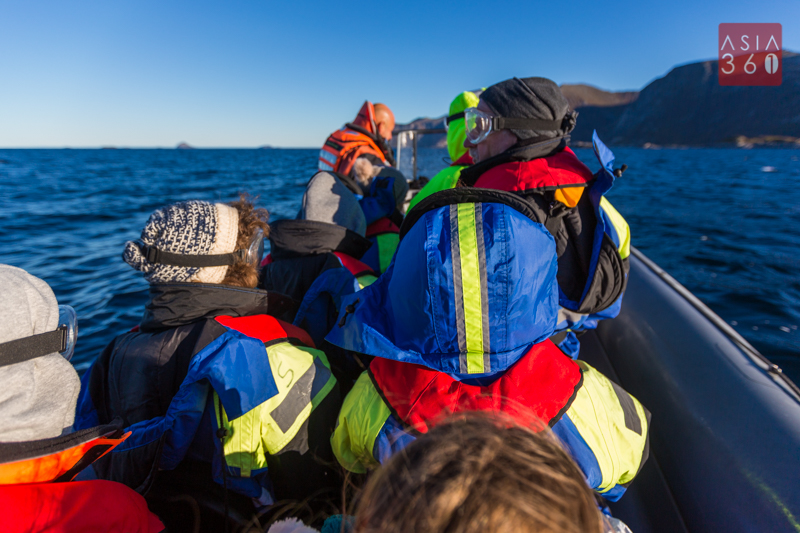 Go on an adventure on a high-speed RIB-boat in search of whales. Photo © Katherine Goh.

Sitting much like pillion riders on a motorcycle, we cut across the northern Norwegian Sea at high speed. Unfortunately, it was not the season to see whales when we were there. In fact, our guide did tell us there was little chance of seeing the whales in early October. But, the ride was no less of an adventure as we saw other marine wildlife such as seals and basked in the magnificent sights of Norwegian fjords. We still had a whale of a time without the whales. 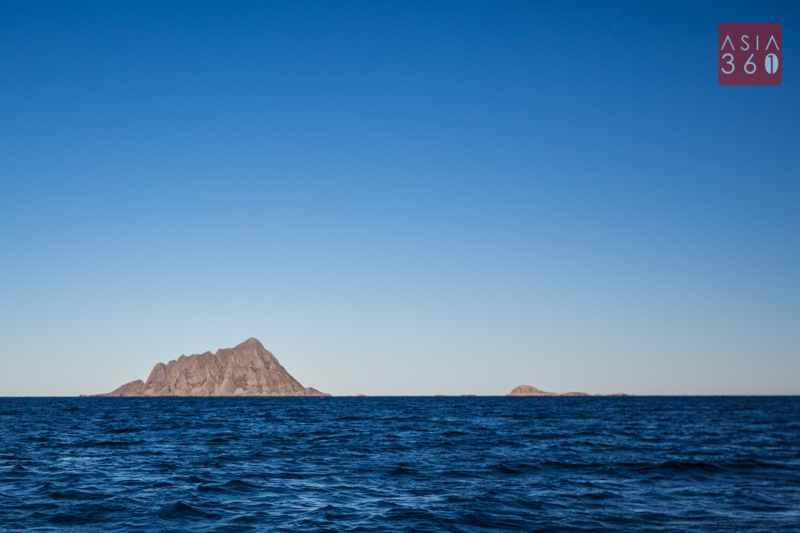 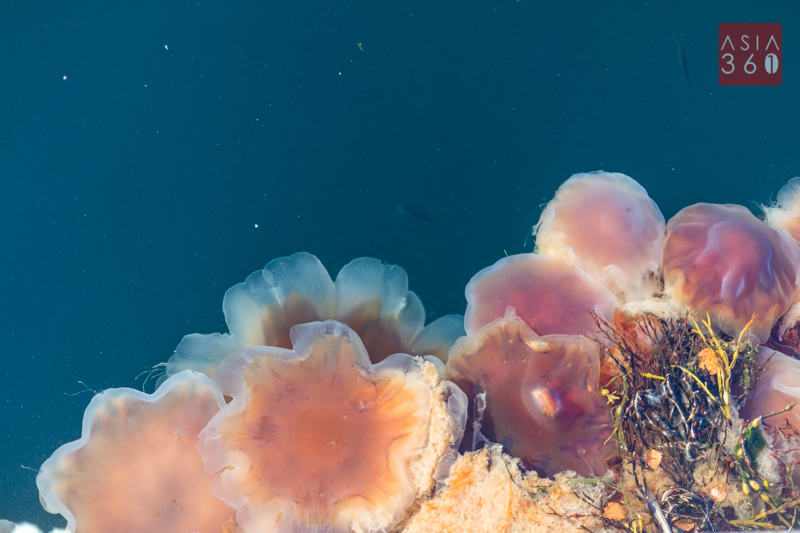 We may not have seen whales but there are other marine wildlife such as jellyfish and seals on our boat trip. Photo © Katherine Goh

You can’t miss the Arctic Cathedral (‘Ishavskatedralen’ in Norwegian), a landmark in Tromsø. The striking architecture of the world’s northernmost cathedral stands out against the background of the 1238-metre Tromsdalstind peak when viewed from the town centre. 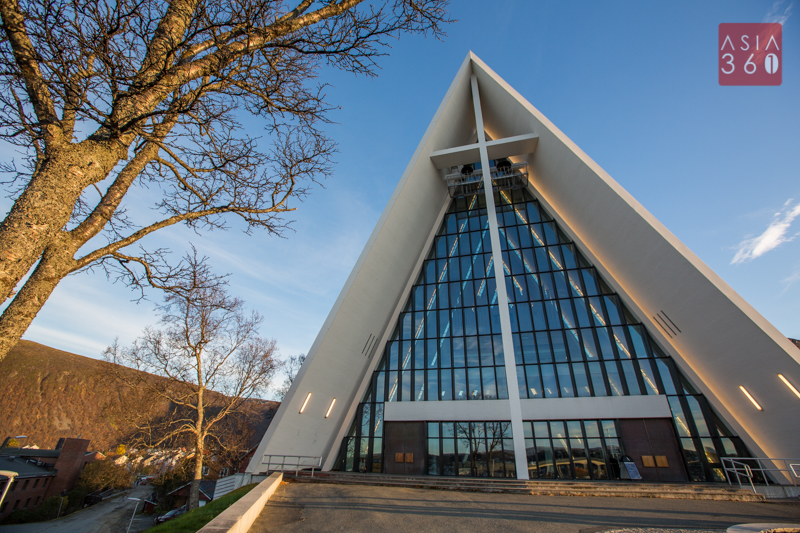 The Arctic Cathedral is a landmark in Tromsø. Photo © Katherine Goh.

Step inside the cathedral and you’ll be greeted by one of the largest glass mosaics in Europe. Depicting the second coming of Christ, the mosaics are created by Norwegian sculptor and glass designer Victor Sparre. If you visit during the Midnight Sun period from May to July, the mosaics take on an intense colour when the sun shines through from the west. The hanging Czech crystal chandeliers – inspired by icicles – complete the look of the striking interior. 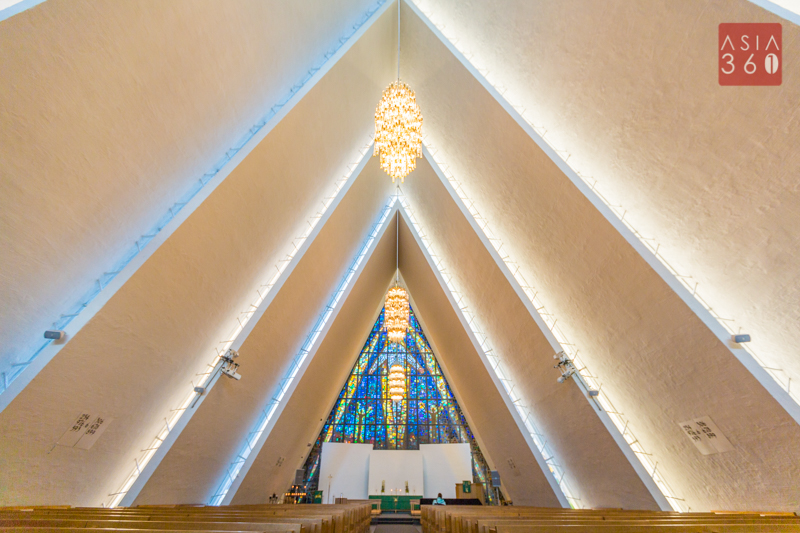 The interior of the Arctic Cathedral. Photo © Katherine Goh.

Due to its great acoustics, the Arctic Cathedral also plays host to midnight concerts around the year. Imagine sitting in the cathedral as the sounds of beautiful Norwegian folk songs surround you. We can’t think of a better way to end the day in Tromsø.

A Bird’s Eye View of Tromsø 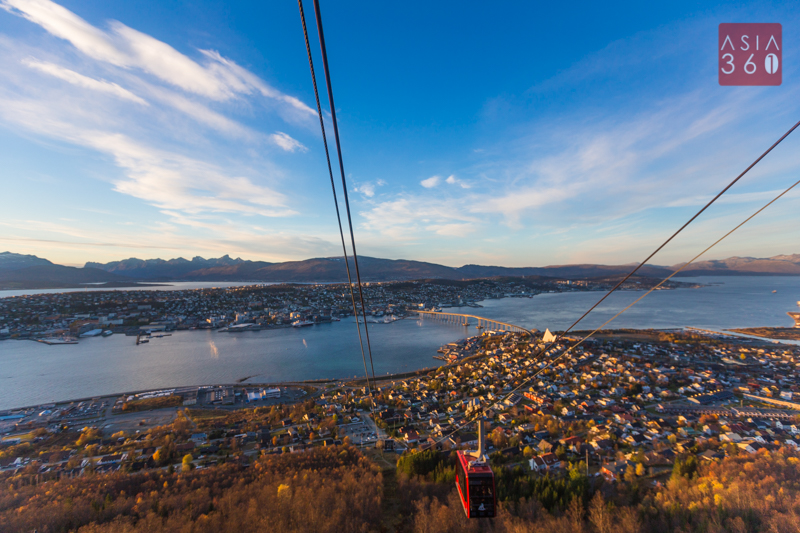 Take a cable car up Mount Storteinen to get a view from the top. Photo © Katherine Goh.

A trip to Tromsø is not complete without a visit to its most popular tourist destination. A 10-minute walk from the Arctic Cathedral, the Tromsø Cable Car offers spectacular panoramic views of Tromsø and the surrounding islands. It runs from Solliveien in Tromsdalen up to the lookout platform on top of Mount Storsteinen, 421 metres above sea level. The cable car ride takes merely four minutes and runs every half an hour in two gondolas adorably named Seal and Polar Bear. 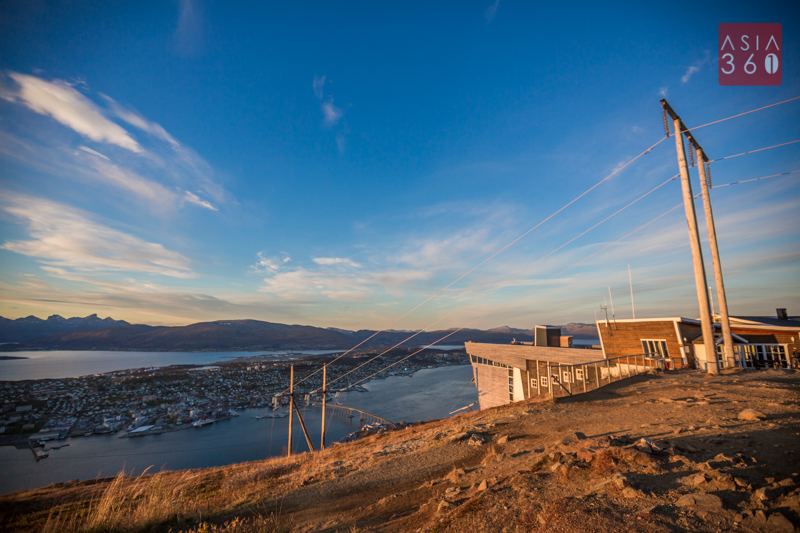 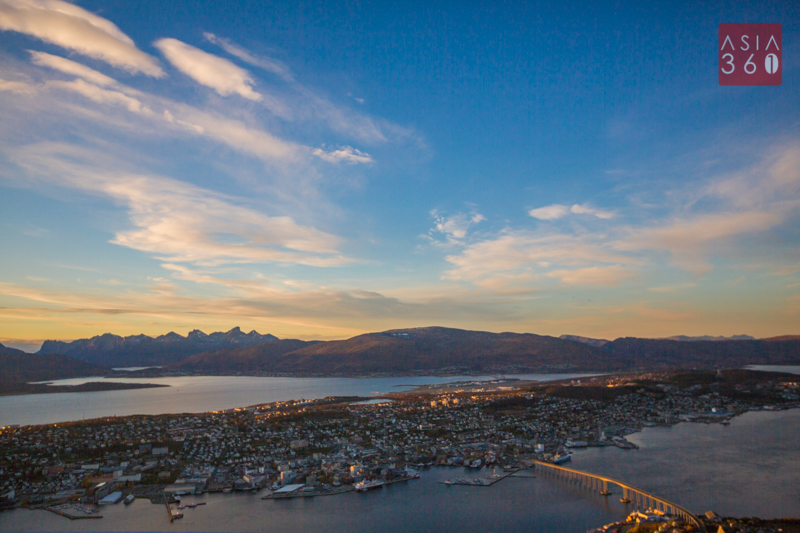 If you are feeling extra adventurous, you can actually trek up to the upper station, Fjellstua, and then take the cable car down to the lower station. It costs NOK 140 (about S$23) for a two-way adult ticket and NOK 90 for a one-way adult ticket. The more intrepid ones also scale the mountain to the top for para-gliding, hang-gliding and skiing. Visit the Fjellheisen website to check opening hours and weather conditions. 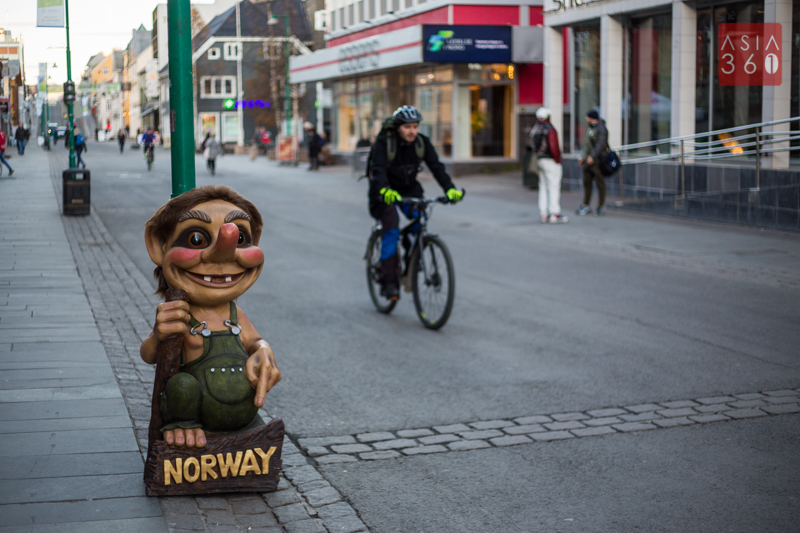 Tromsø is a city that offers many options for accommodation, dining and daytime activities. Photo © Katherine Goh

The city offers a myriad of choices for accommodation. We stayed at Thon Hotel Tromsø, a hotel in the town centre and a walking distance to many restaurants, cafes and museums. For our Northern Lights adventures, we turned to Arctic travel specialist Off The Map Travel to help arrange our itinerary.

How to Get to Tromsø

We flew to Tromsø with a connecting flight in Oslo, Norway. The town centre is about 10 minutes by taxi from Tromsø Airport, Langnes. There is also the Flybussen (Airport Express Coach) which runs between the airport and Tromsø city centre. For more information on Tromsø, visit the Visit Tromsø website.

Error: Access Token is not valid or has expired. Feed will not update.
This error message is only visible to WordPress admins