What's On
You are at:Home»Lifestyle»OCBC Café Bike Crawl 2017: A Journey of Discovery
By Justin Teo | Senior Writer on July 16, 2017 Lifestyle, Singapore

The Singapore weather has been kind of screwy these days of July. I’m not sure if it’s because winter is coming or because of global warming, but it nearly threw my plans awry last Saturday morning. I attended a preview this year’s edition of the OCBC Café Bike Crawl, which fortunately proceeded after the morning drizzle cleared up, albeit delayed by a couple of hours. I would like a cool bike jersey too! Photo: OCBC Cycle. 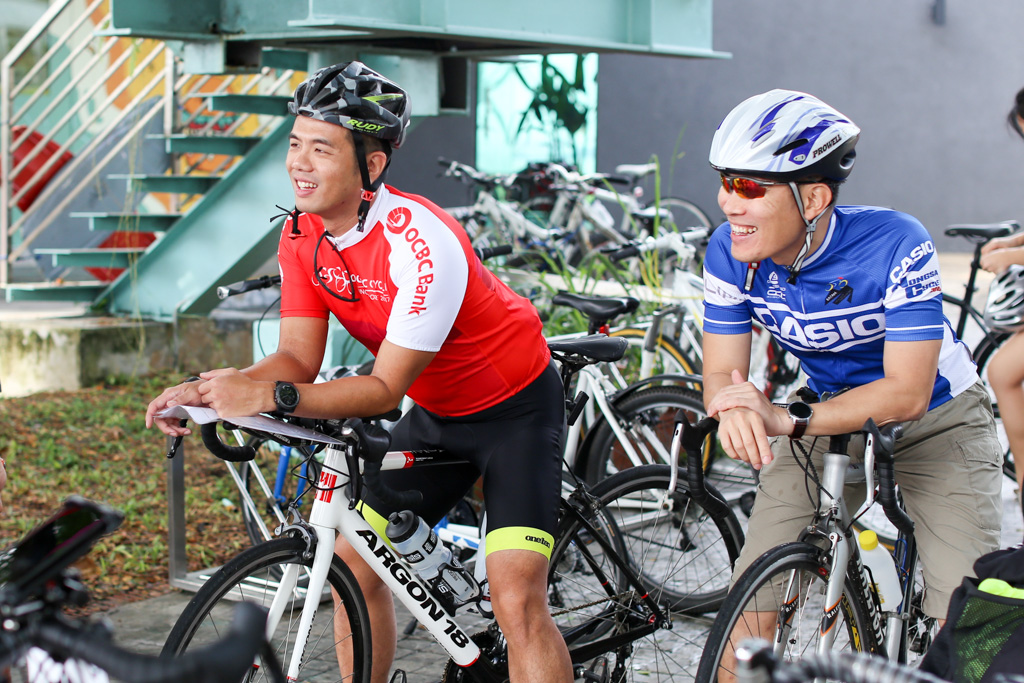 All smiles before setting off. Glad that the weather cleared up. Photo: OCBC Cycle.

I wrote about the OCBC Café Bike Crawl two years ago, and I’m elated to see how OCBC has kept this fringe event as part of the annual OCBC Cycle since. The OCBC Café Bike Crawl integrates Singaporean’s favourite pastime – eating – with one that’s catching on as an alternative lifestyle and transport model, cycling.  This year’s café bike crawl takes us to the eastern loop of Singapore, starting from Coastal Rhythm in East Coast Park and finishing at Jubilee Coffee House and Bar along Netheravon Road in Changi.  The journey took us through one of the newest sections of the Park Connector Network (PCN) – a 10 kilometre stretch along the Tanah Merah Coast Road, which opened earlier in April this year.  Previously, cyclists would have taken the path beside the former Changi Coast Road, which is now closed for the Changi Airport expansion. 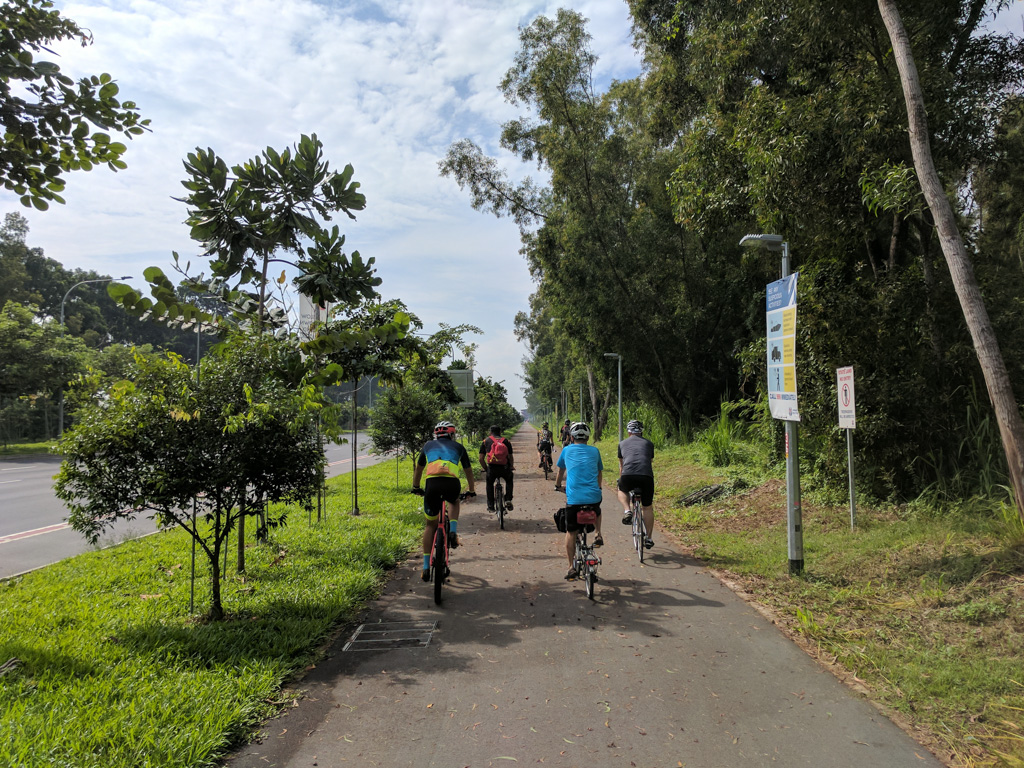 The organisers have heeded comments that previous editions entailed a tad too much eating and not enough of pedalling, so participants this year can look forward to more saddle time.  The longer stretch along Tanah Merah Coast Road is excellent for cyclists to cruise on and push themselves as there are minimal interruptions such as traffic junctions and pedestrian crossings. I do miss the former shaded Changi Coast Road, although I noted National Parks Board has planted saplings along the new bike path. 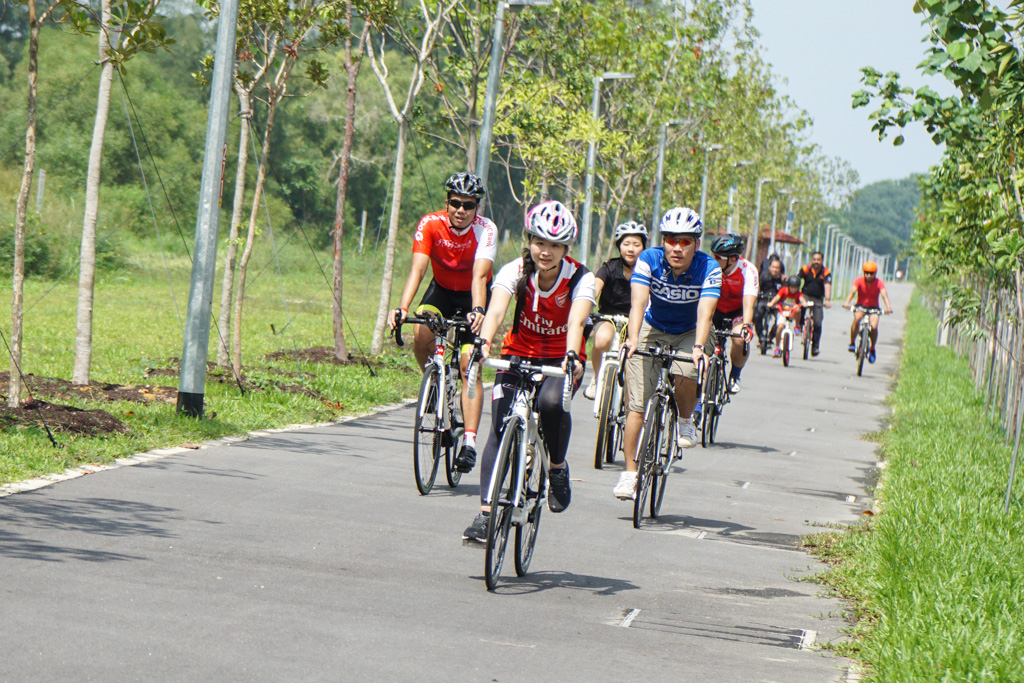 The café bike crawl brought us to Changi Village, a much-loved food stop for many Singaporeans living in the eastern and north-eastern towns of Singapore. I considered myself fairly well-acquainted with Changi Village and its popular chow stops since I live in Tampines, and the Cendol Melaka at Changi Village is a favourite haunt; Journey’s end at Jubilee was a pleasant surprise for me, as I was unaware of its existence until OCBC Café Bike Crawl dug it up for me. 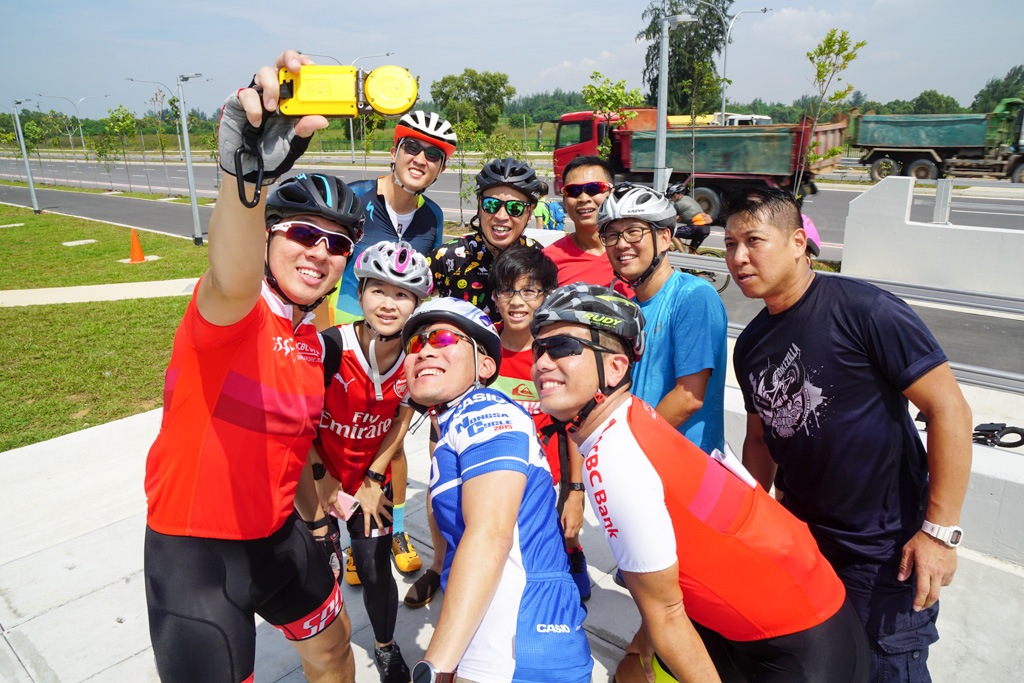 Taking a group shot with the CASIO FR100 at the midway point. Photo courtesy of OCBC Cycle.

Set on a hill along Netheravon Road amid lush vegetation, it’s easy to miss this cloistered café known as Jubilee Coffee House and Bar in Changi. The turn into the tiny carpark is up an incline and one has to look up from street level to see the former bungalow house and its signboard.  The eclectic collection of vintage vehicles and memorabilia from the 1960s and 1970s reminds me of another café round the corner,

The eclectic collection of vintage vehicles and memorabilia from the 1960s and 1970s in the café reminded me of another café round the corner, The Coastal Settlement, which happens to be Jubilee’s sister establishment. Jubilee offers a cosier setting and certainly takes you back to the past, as a sign outside suggests. The menu, which spans eastern and western offerings, has a little something for everyone seeking comfort after a long ride in the tropical heat. 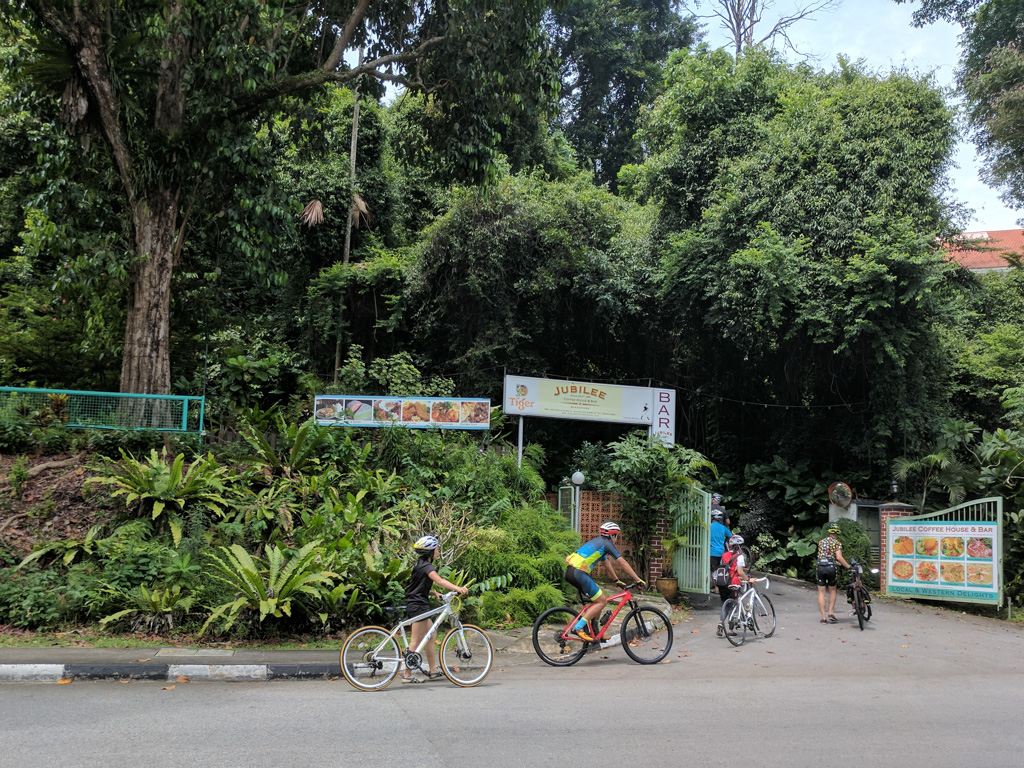 Arriving at our final stop at Jubilee. Photo © Justin Teo. 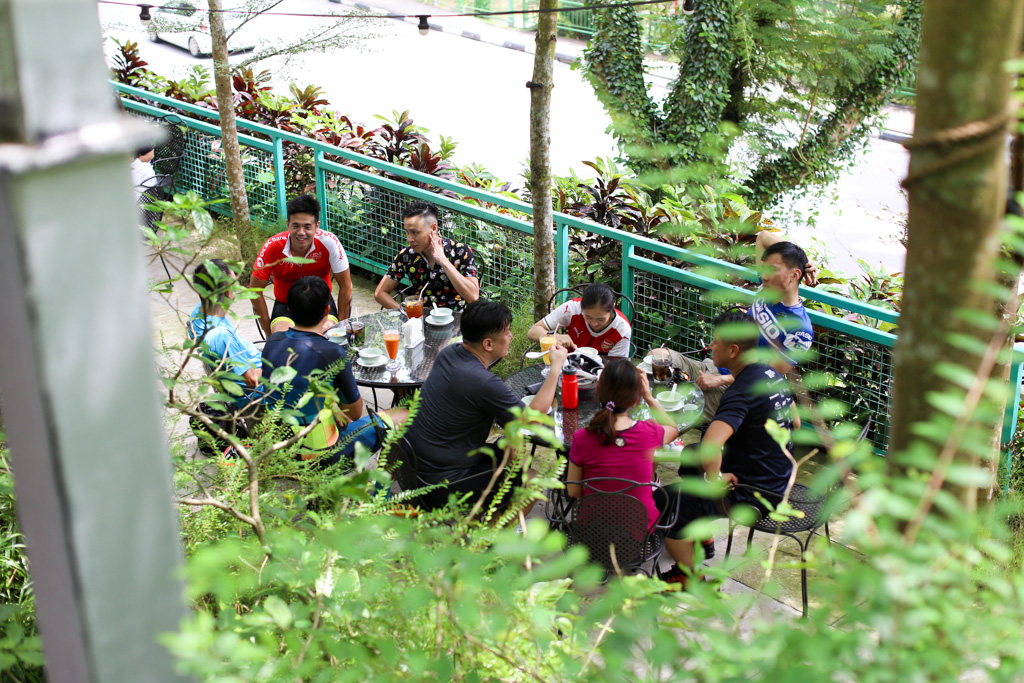 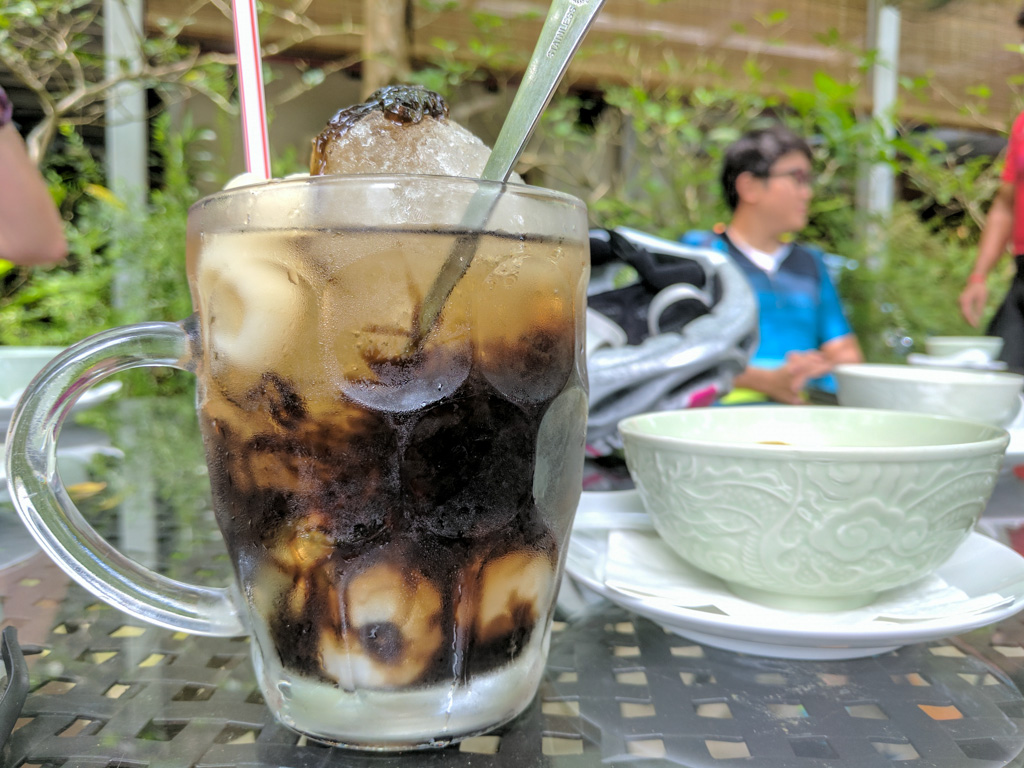 Chin Chow (grass jelly) drink with longan. Something sugary and ice-cold to cool down in the tropical heat. Photo © Justin Teo. 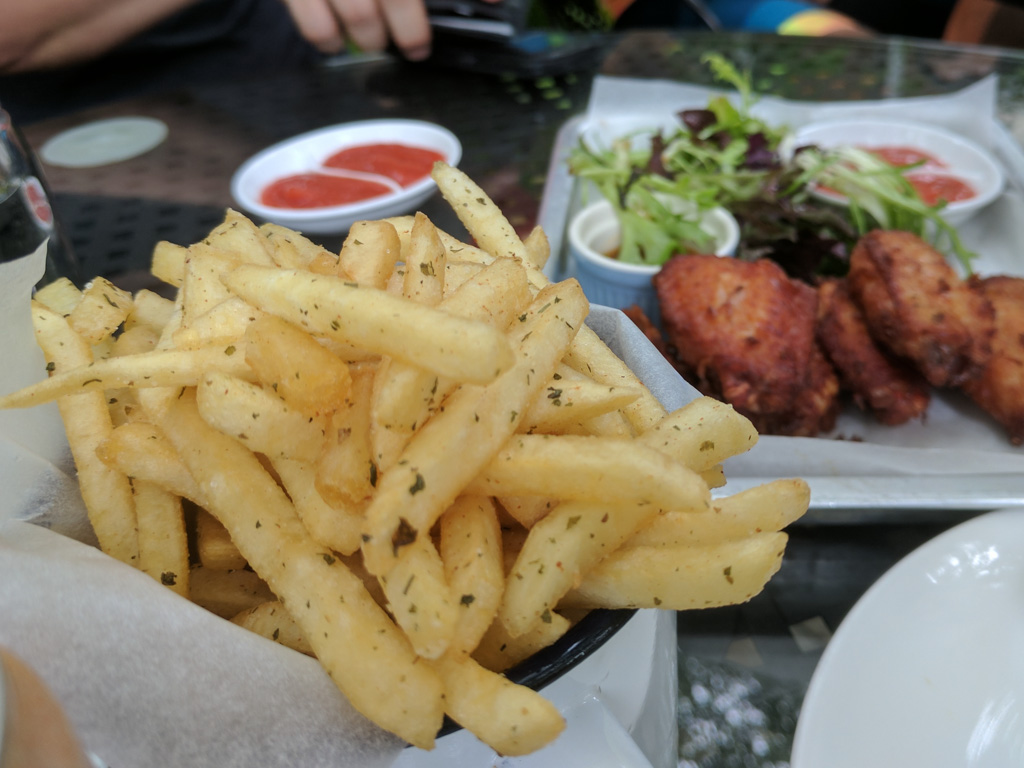 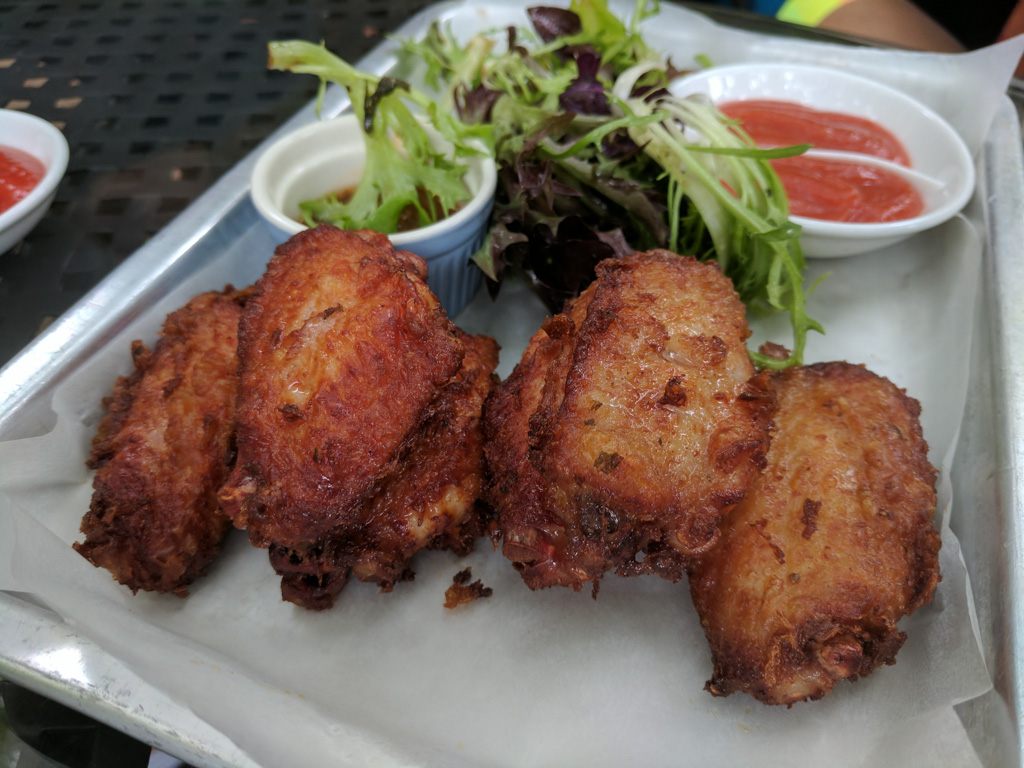 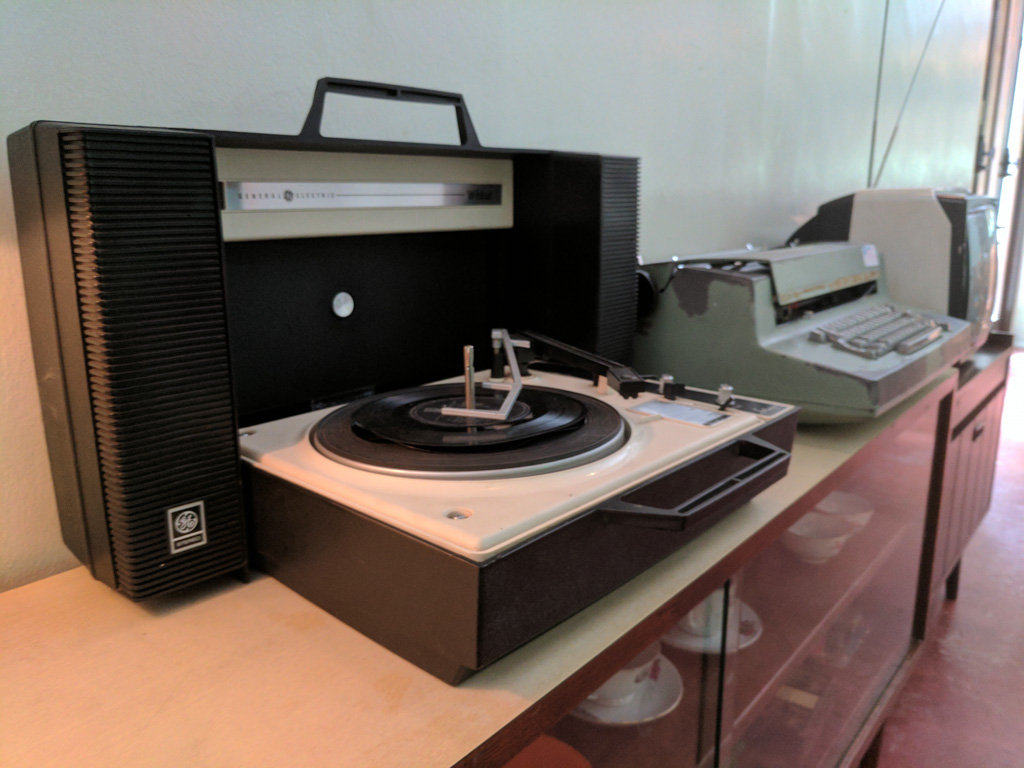 Original collections by the owner from the past. Photo © Justin Teo. 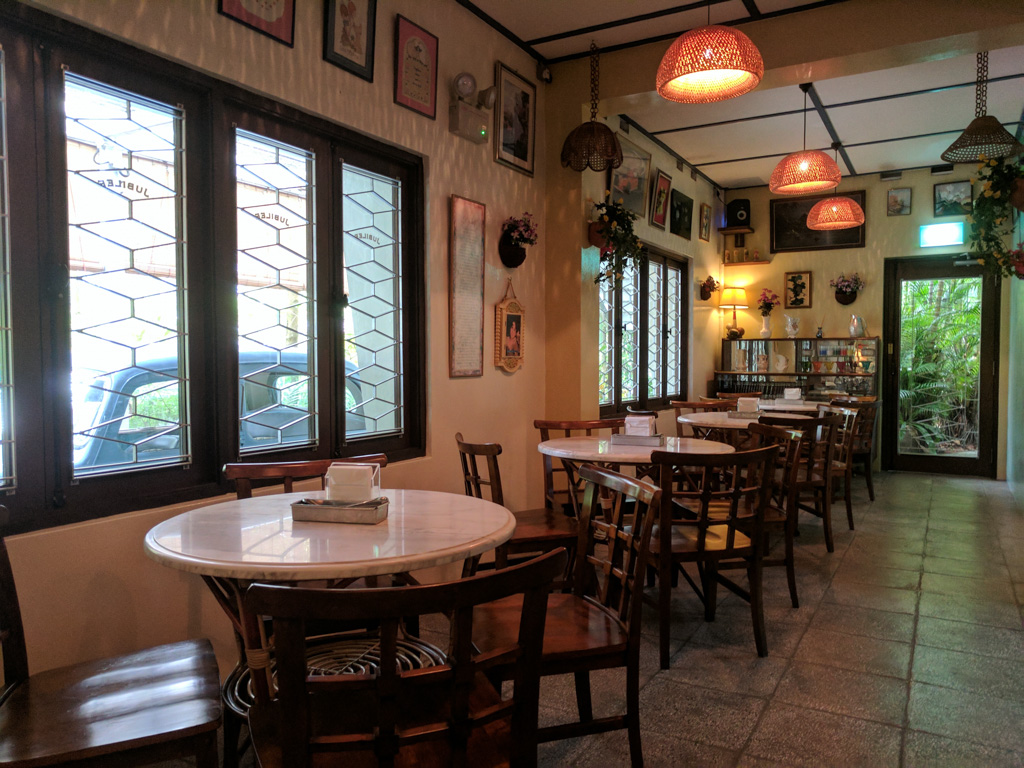 Step into the past at Jubilee. Photo © Justin Teo.

The OCBC Café Bike Crawl to me is more than discovering new bike paths in Singapore’s growing network, or finding the coolest cafés. It’s more about discovering human connections, making new friends and getting re-acquainted with old ones over a common passion for cycling and zest for life.

Fees: S$6 per pax.  The sign-up fees will be donated to OCBC’s chosen charity causes. 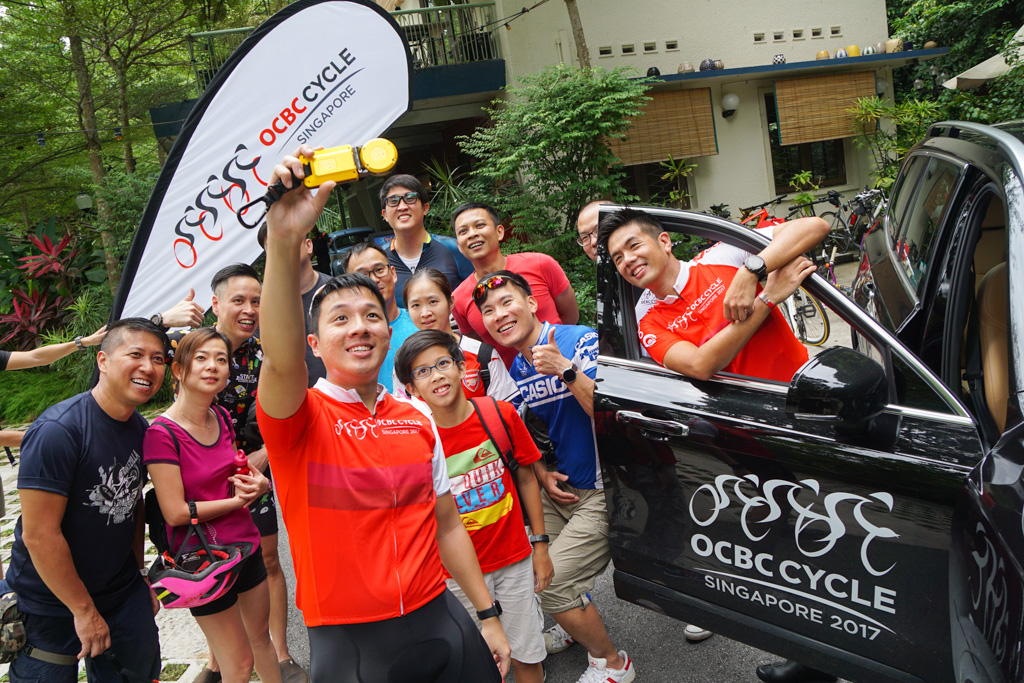