What's On
You are at:Home»Entertainment»REVIEW: Cirque du Soleil TOTEM
By Katherine Goh on October 29, 2015 Entertainment, Singapore

The circus is in town. It’s not just any circus, but Cirque du Soleil. Having been away for 10 years, the French-Canadian circus juggernaut returns with TOTEM, which boasts a cast of 46 acrobats, actors and musicians from 17 different countries. Written and directed by renowned theatre artist Robert Lepage, Totem loosely traces the journey of human evolution. First created in 2010, the production has since travelled to 30 cities across the world and been watched by more than 3.8 million people.

The story begins with a sparkly figure descending from the top of the tent onto a skeletal, dome-shaped structure full of prozotoan creatures, which then swing and leap using two parallel bars within the structure.

What had begun promisingly then starts to turn confusing in terms of storyline. The opening act is followed by Native Americans hoop-dancing, a group of chiselled beach boys doing acrobatics, unicyclists foot-juggling, cavemen playing guitar, a scientist spinning coloured balls in a beaker. You get the drift.

If the story is about the evolution of mankind, it is a highly disjointed one. The acts jump from one to another without any connection, although I understand it was Lepage’s vision not to follow a chronological sequence. 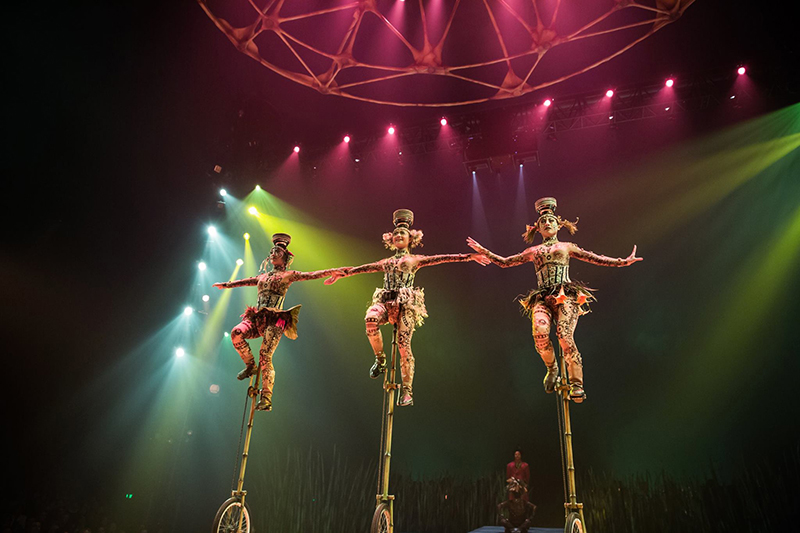 Having said that, most of the routines are impressive on their own, if I ignore the lack of sequential pattern, that is. My favourite act of the night is the quintet of Oriental women pedalling in synchrony on giant unicycles – which also drew the loudest applause on the opening night. Using their feet, the ladies flung small metal bowls and balanced them on their heads. While not entirely flawless (one bowl was dropped), the performance had the audience holding their breath with every bowl thrown into the air.

Another high point was the act by two performers donning Native American outfits roller-skating on a big drum. The duo – Massimiliano Medini and Denise Garcia-Sorta – is a real-life married couple who have each spent their entire lives as circus performers. Truth be told, it is not the first time I have seen a roller-skating act like this, but that does not diminish any bit the thrill of watching this couple perform. Their show is a sensual and mesmerising spectacle. 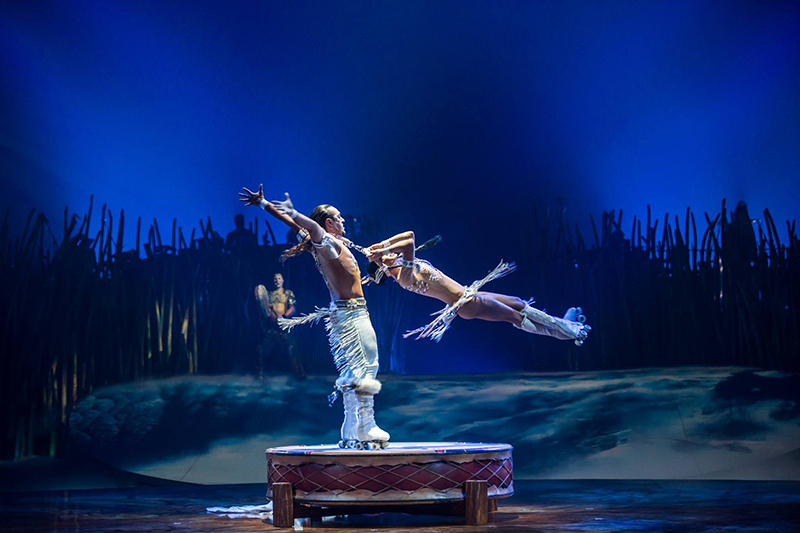 Attempts at comic relief were dismal, and elicited not even a smile from me. The segments with the clowns appear to be time-fillers. However, a couple sitting next to me were laughing at EVERY single movement the clowns made (even when a clown was doing a simple act of skiing). I did wonder if I really have such a low sense of humour or if the couple were simply too easily tickled.

In a nutshell, TOTEM delivers what you would expect from a Cirque du Soleil show – awe-inspiring acrobatic stunts, exquisite costumes and visually stunning sets. There were a handful of misses on opening night – a dropped hoola hoop and a bowl or two – but then again, these are humans who are performing almost super-human feats. Ignore the fragmented storyline, watch each act on its own, and you can expect a bedazzling performance within the Grand Chapiteau.

Where: Under the Big Top next to Marina Bay Sands

Tickets: Tickets start from S$98, and can be purchased via Sistic online.