What's On
You are at:Home»Eat & Drink»Bazuka Yakibuta: A Different Kind of Roast Meat Joint
By Fen Chia on April 18, 2015 Eat & Drink, Promotions, Singapore

Bazuka Yakibuta is a roast meat donburi joint with a big name that epitomises the equally big dreams of its founder, Jeremy Nguee, who is behind famed gourmet caterer Preparazzi.  While its outlets are takeaway joints which provide a fuss-free and affordable working class lunch (or “bourgeois lunch” in Jeremy’s words) , it represents his bigger dream of getting Singapore food global, in a ‘cosmopolitan and sexy’ way. 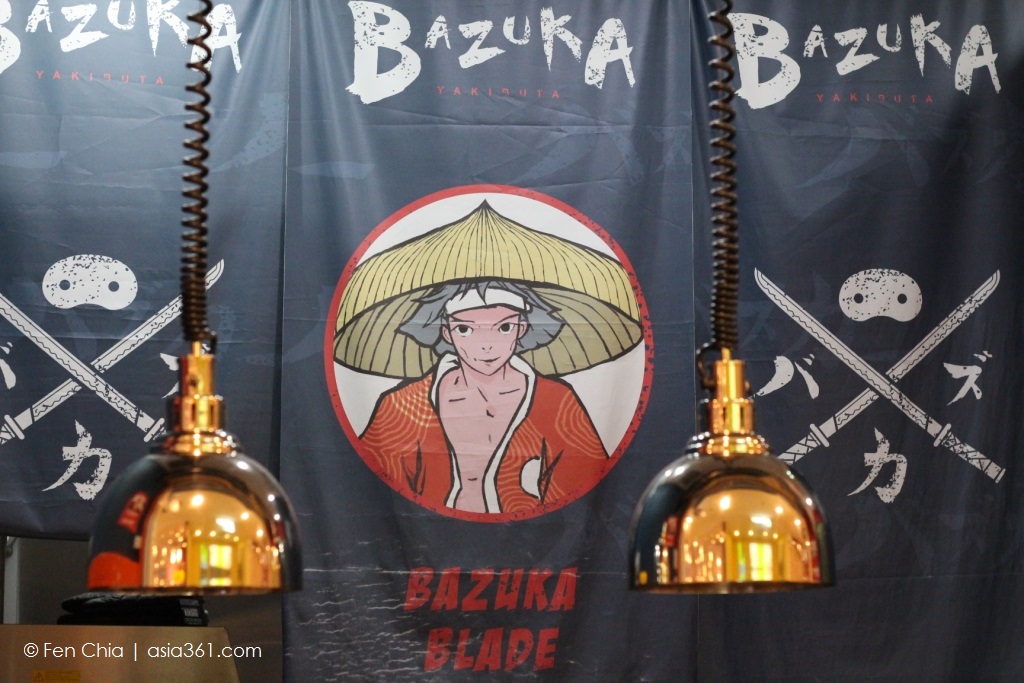 One of Bazuka Yakibuta’s two mascots, Bazuka Blade greets you at the outlet.

The Bazuka Yakibuta outlets in Great World City and the National University Hospital serve just one main course, a donburi (‘rice bowl’ in Japanese) with a choice of char siew (“caramel roast pork donburi”) or sio bak (“crackling roast pork donburi”), or both in a combination meal.  It is our very own favourite Singaporean roast meat dish applied to a Japanese sarariman (‘salaryman’ in Japanese) eatery concept.  The same hole-in-the-wall homeliness, the single-dish meal and the use of mascots in the same way the Japanese do give the eatery a refreshing vibe.  Yes, in addition to the sight of golden pork crackling, one is greeted by Butaman (a pig) and Bazuka Blade (his nemesis) when one walks up to order!

For my first meal here, I tried the combination donburi with the works – both types of meat, with the add-on of a quivering onsen tamago, accompanied by the trademark garnish of hae bi hiam dried shrimp chilli and pickles (free with each order).  The rice used is shirataki short grain, and is laced with a vegetarian tare-inspired sauce.  The crackling roast pork comes in generous, tender chunks and the crackling is perfectly crisp. 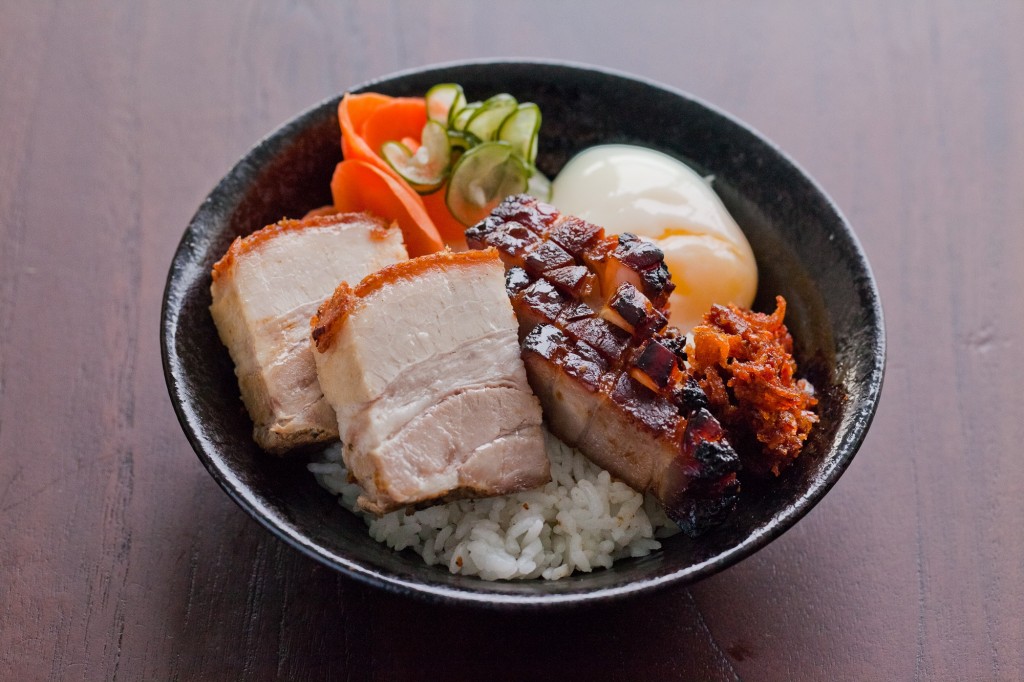 The real star of it all for me, however, was the char siew, marinated for at least 24 hours with its caramelised burgundy edges, slightly crisp with a hint of being charred, just the way I like it. And what could go wrong with creamy yolk enveloping the whole mix in its swirls?  The price is reasonable too – S$7.80 for the donburi with one type of meat, or $9.80 for the combination donburi, with the egg at an additional S$1.  Sides available currently include miso soup ($1.50), a creamy potato salad and soba with wafu dressing (S$2.80 each). 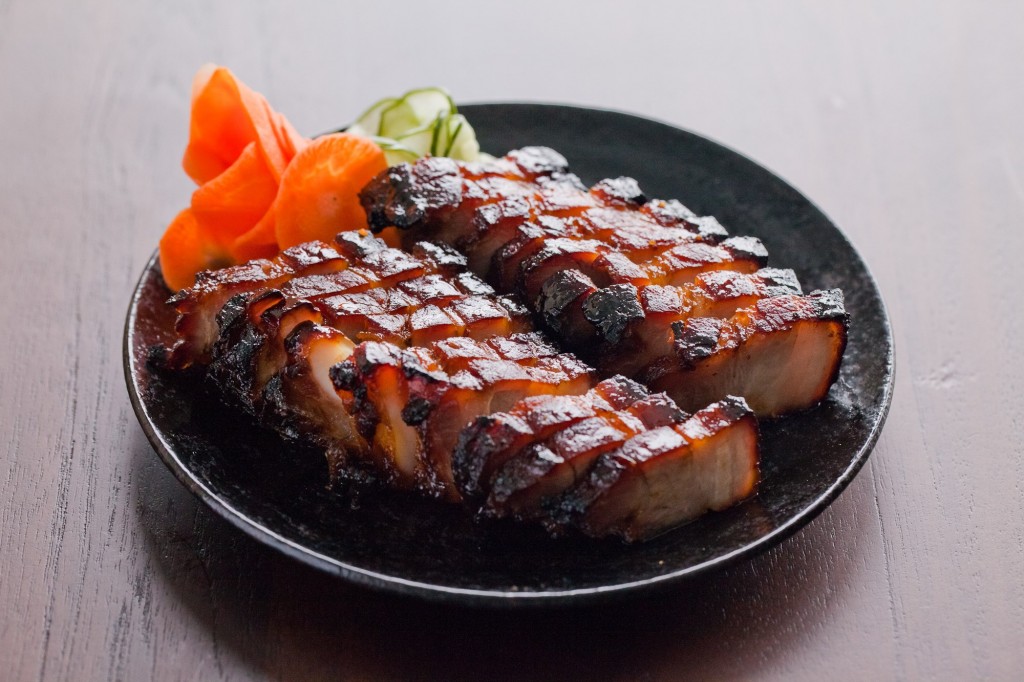 Jeremy told me seriously that it takes more than three and a half hours to cook the crackling roast pork, which by popular research, is supposed to render all the fat and leave the collagen — that mystical substance which women worship as the elixir of youthful skin and healthy joints.

I have fear of neither fats nor meat or fatty meat, as evident from the way I polished up my bowl.  In fact, I expressed regret at his decision to discontinue the lard-based sauce used in the rice that he had originally started out with. However, I acknowledged that this would cater to the health-conscious out there, and suggested that expanding the menu to include other options would help those who are less of pork-lovers, and so would adding on more green salads to the sides.  Meanwhile, the pork and collagen argument were sufficient consolation for me, as I crunched blissfully through the golden crackling. Beyond the singleness of the dish, there’s nothing not to like about this concept – in Jeremy’s vocabulary, this is a ‘concept’, not just a dish or a meal.  He is running Bazuka Yakibuta on a franchise model, a plan he hopes can one day use this local-inspired cosmopolitan meal to put Singapore on the world map.  The disparity is, as he points out – Singaporeans shell out $20 for a single bowl of Japanese ramen, while local delights like laksa and char siu sio bak rice tend to be taken for granted.  With premium ingredients and preparation, he hopes to elevate them to something more – and he’s also thinking of having two food concepts within one outlet.  Think donburi offered alongside frozen yoghurt, but that’s another story for another day.

If there is someone who can elevate our hawker favourites to join the ranks of greatness, Jeremy just might be the guy.  His one-time pop-up bar Rakusaba, which served a tsukemen (dipping ramen) with laksa sauce was a hit, and so was Bazuka Yakibuta when it first appeared as a pop-up store at an event last year.  His journey with Preparazzi has shown he has the business and marketing flair too.  In the hope of tasting more of that great crackling and caramelised char siew and as a proud supporter of local fare going global, I wish him very well.

For readers of Asia 361, enjoy 20% off your total bill with purchase of two of Bazuka’s signature caramel and crackling roast pork donburi (S$9.80). Simply show this article on your mobile phone at the point of purchase.  Available now till 31 May 2015.