What's On
You are at:Home»Entertainment»The Ultimate Tribute To Elvis – Legends In Concert
By Fen Chia on April 6, 2015 Entertainment, Singapore
Never have I seen so many Singapore seniors do up their hair for a concert, and I’m referring to the men. I spotted a few sporting a freshly-permed pompadour, and countless others with hair slicked back with gel. Before it began, many were already shaking their legs in rhythm with the songs being played over the PA system. One middle-aged executive behind me was already humming out loud and tapping his fingers to the music before the lights dimmed.
Nonetheless, I wasn’t the only non-senior-citizen member of the audience watching The Ultimate Tribute to Elvis Legends in Concert, which is in Singapore for the very first time at Marina Bay Sands MasterCard Theatres. Direct from Vegas, the show featured champions and finalists from Elvis Presley Enterprises’ worldwide “Ultimate Elvis Tribute Artist Contest”. The show walks – no, rocks the audience through the life of the King of Rock and Roll, from the 1950s to the end of his life.
“The More Screaming You Do, the More Shaking I Do”
Starting off with a seriously intense bout of hip gyrations and leg twitching, (with none of the controversy and protests of the 50s) together with crowd-warming songs like “That’s All Right” and “Love Me Tender”, “Elvis the Pelvis” did a commendable job of working up the crowd early, which started off being rather reticent at first.  He flirted and bantered with the audience, went down on his knees, slid down to lie on his back, kissed the lucky ladies in the first few rows. As the screen in the background showed video footage that traced Elvis’ life, he encouraged the audience to scream a bit more.  As is the case with many concerts here, the audience was appreciative but still rather tame. 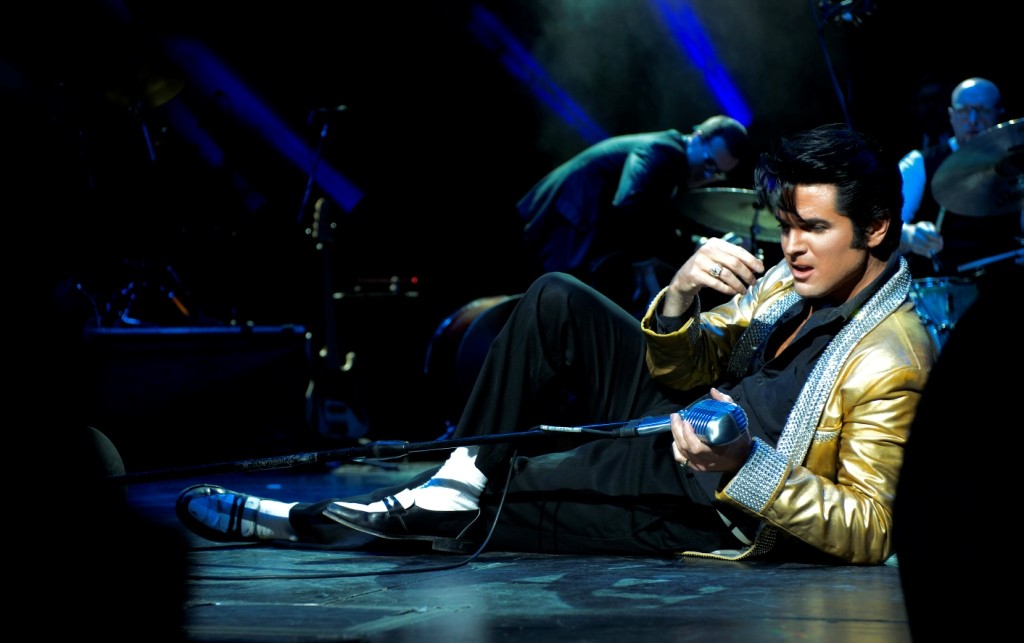 No matter, for the songs segued into the gospel with “Peace in the Valley” and “Crying in the Chapel”, soulful, spiritual numbers with backup singers, where Elvis showed he could also be a real ‘decent, fine boy’ as Ed Sullivan described in 1957.  We then moved into the era of the musicals, with “Viva Las Vegas”.  During the rendition of “C’mon Everybody”, the audience had to be coaxed to snap their fingers and to turn their heads right and left.  An “Ann-Margret”, often called Elvis’ leading lady, appeared to perform with him, as “The Lady Loves Me” led us into the intermission.
Up Close and Personal
The audience was rejuvenated after the break, and the effect was a spirited response in the second half of the concert.  What kickstarted it was the sight of Elvis in a skin-tight leather suit, emblematic of his ’68 ‘comeback special’, which elicited appreciative cheers from the ladies.  The performance that really hit home, however, came next when Elvis did what he called a ‘jam session’ in recognition to the early songs and the rhythm and blues.  He came up close to the audience and took over the guitar, taking dedications and performing raw versions of “Are You Lonesome Tonight”, “Jailhouse Rock” and “Mystery Train”.  “We love you too!” we chanted in response to his shouts. 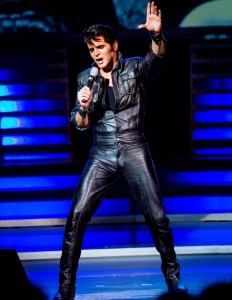 Rewarding us, Elvis gave more kisses and told the lucky women in the audience “I’ll see you later!”, which was met by cat calls and wolf whistles.  We moved into the later stages of Elvis’ career , which I enjoyed most as he crooned the more measured tunes of “Burning Love” (his last top major hit on the charts) and “You Gave Me a Mountain”.
Elvis continued to dish out kisses and humour, joking that he “recently turned 80”, and was visibly perspiring (“for real” he clarified) under the rather warm conditions in the theatre which he said was “hotter than Memphis”.  This didn’t deter the women from rushing to grab at the scarves he had worn around his neck, which  they gladly paid for with more smooches, as “it ain’t free”.
Glory! Glory! Hallelujah!
By the end of the session, where the backup singers returned for “America the Beautiful” and “Dixie’s Land”, part of the American Trilogy which Elvis had made as part of his regular concert routine in the 1970s. The audience was lapping up all his antics, applauding as he flashed his magnificent American eagle full-length cape, inlaid with semi-precious stones for his 1973 Aloha from Hawaii via Satellite.  It didn’t matter that this was Singapore, for it was shown clearly how universal Elvis is.  There are die-hard Elvis fans here too, as I found out. 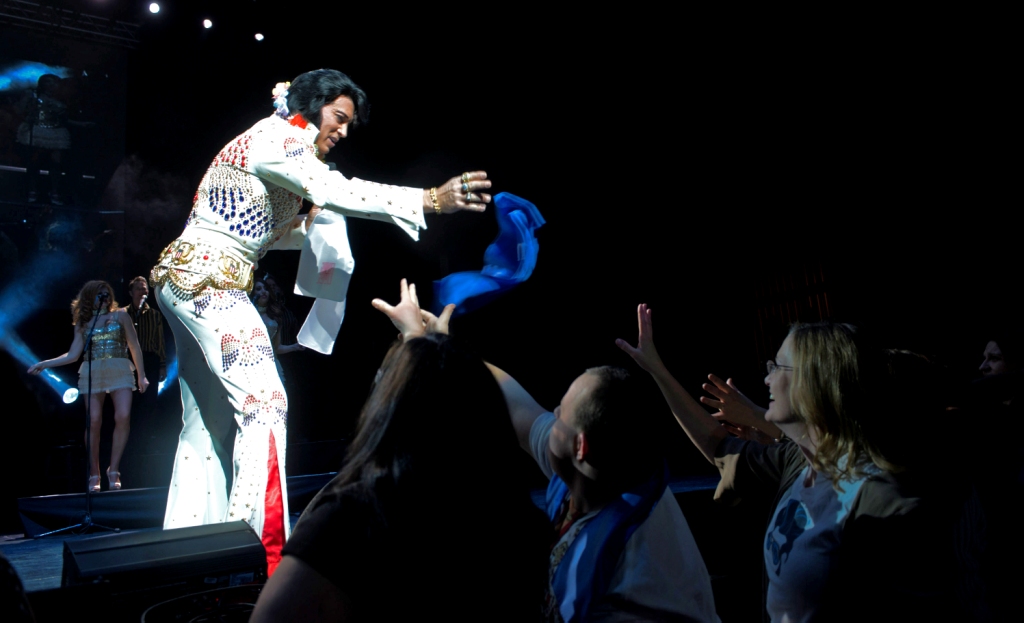 How could the show close without the romantic ballad “Can’t Help Falling in Love with You”?  Indeed, it couldn’t – and that song finally presented itself at the encore.  At the curtain call, not one, but three Elvises appeared – this was shocking to me for I could not tell them apart and had not noticed at all during the show when their swaps were made.  Then I recalled that this was about “legends in concert” and was supposed to feature multiple, and the very best of Elvis impersonators after all.
And so, we are comforted, that Elvis the legend lives on.
Share. Twitter Facebook Google+ Pinterest LinkedIn Tumblr Email