What's On
You are at:Home»Eat & Drink»Permata Singapore – A Taste of Home
By Iyan Danial on July 17, 2021 Eat & Drink, Indonesia

Nusantara — the word itself is a bit of a mouthful to pronounce. But akin to the etymology of the word – which means “outer islands” in old Javanese, Nusantara cuisine is an amalgamation of diverse culinary traditions from the archipelagic nation of Indonesia. One can expect a myriad of emotions when presented with the Nusantara Cuisine: from nostalgia to warmth to a sense of sheer delight. I would know because I felt all of these emotions when I visited Permata Singapore at Gedung Kuning recently.

Situated at a former Malay Palace, Permata Singapore makes a grand first impression with its “royal” yellow walls and Palladian architecture. However, the interior was completely opposite to what I expected. I felt like I was stepping into a close family’s home. I was there for an a la carte lunch buffet and the weather was mildly hot when I arrived. As soon I stepped indoors though, the sheer breadth of the room and muted colours gave a much-needed cooling effect.

Encouraged by the captivating décor, I held high hopes for the food and was eagerly anticipating for them to arrive. And, I was not disappointed.

My dining companion and I were first served appetisers. We tried the Cemil-Cemilan Platter consisting of a selection of Keropok and Potato Epok-Epok. The Keropok were really fresh. Every time I bit into one, it cracked nicely in my mouth. It got almost addictive after a while. Similarly, the Potato Epok-Epok – filled either with the traditional sardines or vegetables – felt paradoxically filling yet light at the same time.

We were also served six signature sambal chilli, specially hand-pounded by the chefs. These ran the gamut from spicy to sweet to unique. All the sambal sauces remained available for us throughout the meal. Two sambal varieties in particular were quite interesting. One was a vegetarian sambal that, when paired with the Keropok, created a delightful contrast between light dryness and random sweet bursts of flavour. The other was a durian sambal that carefully balanced the usual strong smell of the durian while bringing out the sweet quality that people often crave. When mixed, it made the Keropok and Epok-Epok taste like candy. 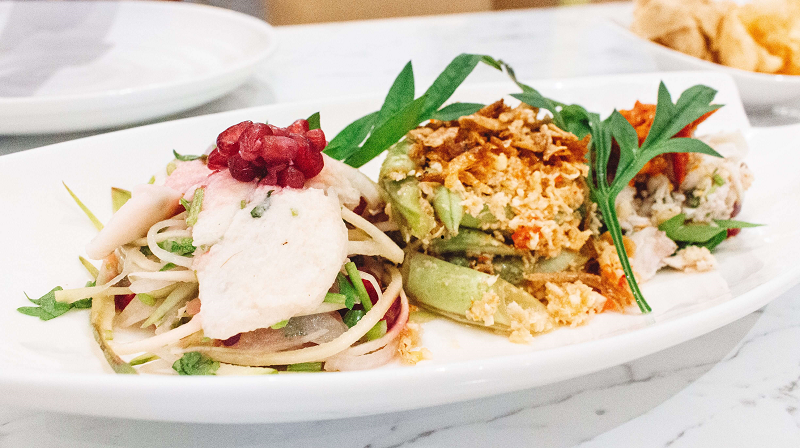 Three of the best – the Kerabu Salads are sushi-styled mixtures with Thai, Malay and Filipino influences Photo @ Iyan Danial.

Next, we had the Kerabu Salads. It is made up of three sushi-styled mixtures that are inspired by Thai, Malay and Philippines cuisines. One salad contained a variety of vegetables (cucumber, onion, soursop and more) that complemented one another well in flavours. Another salad provided a crustacean experience with cereal prawns. The last salad infused tender seabass with mild Thai chilli sauce. It was the perfect appetiser in every sense of the word, teasing me with a few morsels of delectable meat, vegetables and sauces.

Other note-worthy appetisers include the Chilled Seafood Platter, Mee Soto Soup and Chicken and Mutton Satay.

The Chilled Seafood Platter is made up of salmon fillets, oysters, mussels, prawns and crayfish. The salmon was the best of the lot and was meltingly soft with every bite. I didn’t feel so much for the other items on the platter though. They were fresh but nothing too surprising in terms of taste.

The Mee Soto Soup was a welcome addition. It was clear and balanced and I could taste the full essence of the chicken. I was hit by a wave of tranquility. which was welcome after the initial adrenaline of food tasting. This is greatly recommend drinking this whenever you feel a little jelak or need to wash down all the richness of the food. The biggest surprise was the satay. It was grilled to perfection and the meat slid off the stick smoothly like butter. The peanut gravy was not too thick and accentuated the tender meat well. My dining companion and I had no choice but to finish it. It was that good.

We were also served with a bunch of grilled dishes like Daging Bakar, Ayam Percik, Tempoyak Ikan Patin and Tiram Bakar. The Daging Bakar was an absolute delight. Sweet Gulai sauce mixed with the grilled taste of the daging made it easy to wolf down the tender meat. The Ayam Percik was more bones than meat. But it was still tasty enough with the coconut sauce though the sweetness was considerably milder compared to the Daging Bakar. Tempoyak Ikan Patin was  a tad disappointing. The turmeric sauce overpowered the taste of the fish and it felt diluted as well. The fish also seemed a little raw. 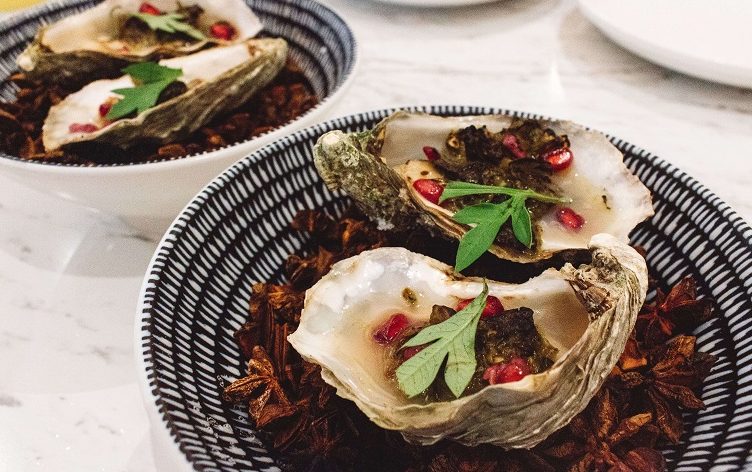 The Tiram Bakar is an aroma of delight. Photo @ Iyan Danial.

The most interesting dish of the four was the Tiram Bakar. The dish was plated beautifully–served on oyster shells and top with aniseeds for an earthly aroma. I felt like I was a fisherman eating freshly caught oysters by the sea. The oysters were well-grilled, not charred but also still retaining the freshness. Overall, it made for a very wistful experience while eating this dish.

At this point, our appetites were already fully whetted by the appetisers yet we still eagerly awaited the main course. The main course turned out to be more simple. There were seven dishes we could choose from, which ranged from Wagyu Beef Rendang, Ayam Binjai, Belimbing Lamb, Tempoyak Ikan Patin, Brinjal and more. 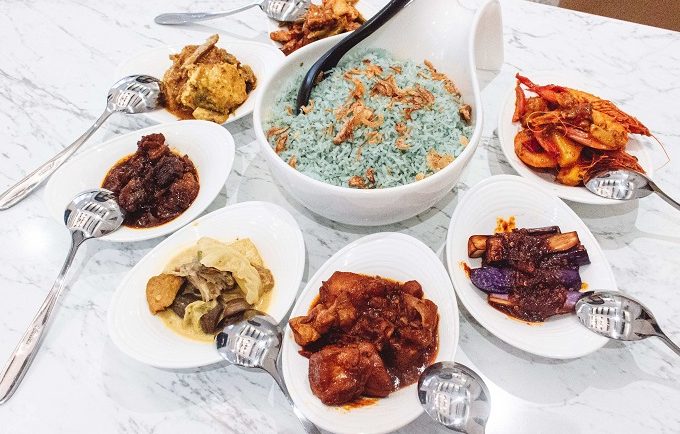 The main course is made up of a selection of dishes. Photo © Iyan Danial.

A lot of thought was put into the selection of dishes for the main course. It was meat-heavy and extremely filling compared to the appetisers we had earlier. Ayam Binjai was cut into cubes, making it easier to eat. The usual dour taste of brinjal was nicely complimented by the sambal. The chicken, beef, lab and fish all were distinctive on their own. All in all, the main course was satisfying as it did not feel excessive. The proportions were just right.

Initially, I did not know if I would be able to have desserts after all the feasting. Luckily for me, I did. The combination of tarts, macarons and chocolate brownie looked intimidating at first but their flavours were very well-balanced. The macarons were soft and cream while the tarts were sweet but not overly so.

I was expecting the brownie to be the sweetest but when I bit into it, surprisingly there was no sweetness overload. Instead, it tasted rich and dark, like I was eating a small piece of dark chocolate from Cadbury with a hint of nuttiness. I found out the Chef had actually cut out the crystal sugars from the brownie and added in a unique ingredient – buah keluak.

The chef explained that too much sugar would make one feel a little sick after eating so much food and sometimes people want to enjoy sweet things without compromising too much on health. That was why he made a conscious decision to replace sugar with buah keluak. He experimented for months just to source for the perfect replacement for sugar. What a surprising twist for the brownie.

The biggest surprise and my favourite dish of the day was the Paddle Pop though. Never would I have expected a common childhood snack to be served at a restaurant. The Chef has actually put dried passion fruit and pineapple around the Paddle Pop to simulate the feeling of the “fizzle and pop” and it worked! It was a very satisfying dessert and I was grinning gleefully like a child as I was eating.

When I spoke to the Chef at the end of the meal, he said that his vision was to make this restaurant a place where one could have their “Ratatouille moment”. He wanted his guests to feel safe and comfortable as if they were returning home or remembering their childhood days.

I came to Permata Singapore expecting a standard buffet experience with Nusantara elements. However, I left feeling nostalgic and fulfilled. From the selection of the food to the service provided to the taste of the food itself, a lot of thought and care were put into curating the best dining experience for the guests.

While the dishes may not be plated like those of fine dining restaurants, the charms of each individual dish coalesced to elevate the overall dining experience. In a sense, Permata Singapore stayed true to the Nusantara experience by presenting good, homely food from a variety of cuisines.

Iyan spends his time learning all sorts of things, including writing and reading. He also loves history and sometimes dreams about being transported and assimilating into a historical era.