What's On
You are at:Home»Entertainment»Review: Walking With Dinosaurs – The Live Experience
By Wei Kurk Fong on September 1, 2019 Entertainment, Singapore

Humans have been fascinated with dinosaurs ever since the first discovery of dinosaur fossils circa 1819. And no wonder, since no creature in the animal kingdom is quite as majestic or mysterious as these ancient “terrible lizards”. The fact that we have never seen one in real life and that we have had to rely on our imagination and the interpretation of scientists as to how they looked and lived only add to the intrigue. 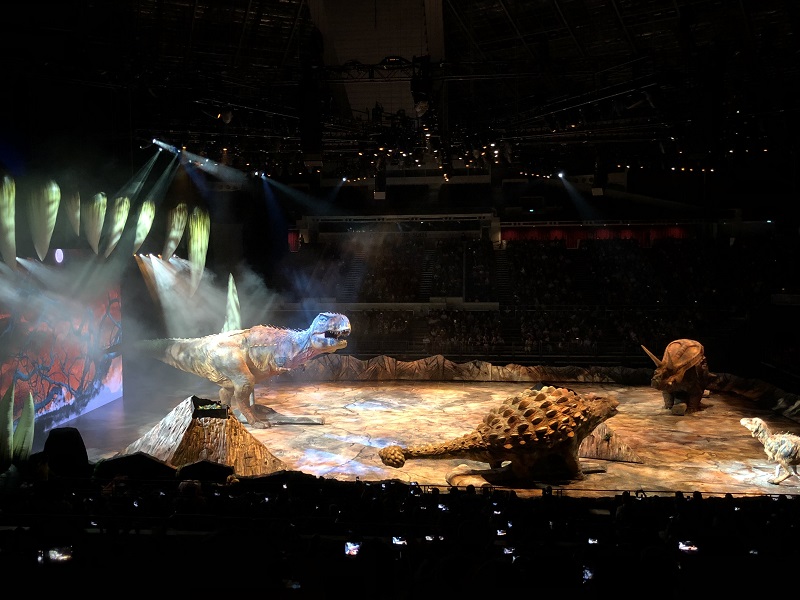 Until now. Walking with Dinosaurs – The Live Experience has arrived on the shores of Singapore and is probably the closest you’ll ever get to seeing these magnificent creatures ‘alive’. Or at least until someone can turn Jurassic Park from a movie to reality. Now wouldn’t that be cool (assuming we don’t get eaten by a rampaging T-Rex)? 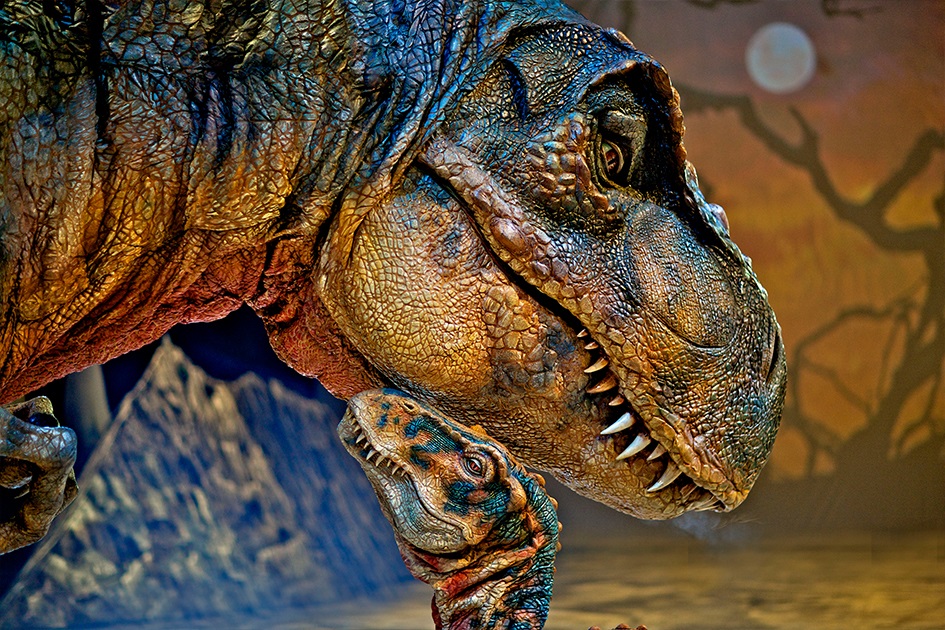 Who knew such a fearsome creature could be so loving?

Based on the award-winning BBC Television series, the show has been seen by over 9 million people in more than 250 cities around the world. Using state-of-the-art technology, internationally-acclaimed designers worked closely with scientists to create 18 life-sized dinosaurs that look so uncannily life-like. A Plateosaurus shares a tender moment with her newborn.

You’ll know what we mean by ‘life-sized’ once you see the dinosaurs saunter onto the stage, especially the larger-than-life Brachiosaurus which is so ginormous its head almost scrapes the speakers hanging from the roof of the Singapore Indoor Stadium! Just being able to witness the sheer size of these creatures is worth the price of the ticket alone, especially when cleverly juxtaposed against the fictitious palaeontologist Huxley who narrates the show, to give us a sense of perspective of how small we really are in comparison. 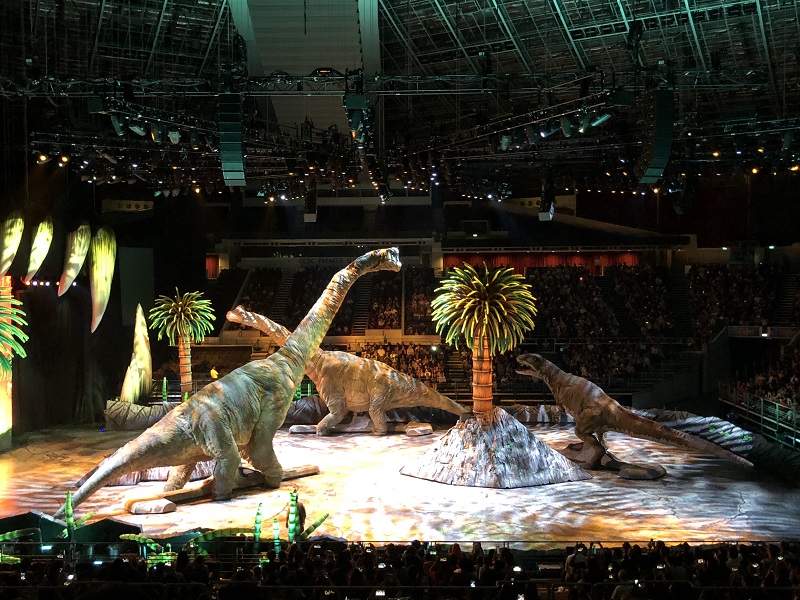 Mummy Brachiosaurus comes to the rescue.

With the amazing use of puppetry, suits and animatronics, each movement of the dinosaurs is carefully controlled by puppeteers and drivers inside the dinosaurs. You are left in no doubt that each swing of a tail so perilously close to the audience without actually hitting anyone, and each lowering of a head to the eye level of the audience, is perfectly orchestrated for a spell-binding live interaction. The realism is best demonstrated by the sorry-looking Torosaurus as it limps away defeated after a territorial fight. 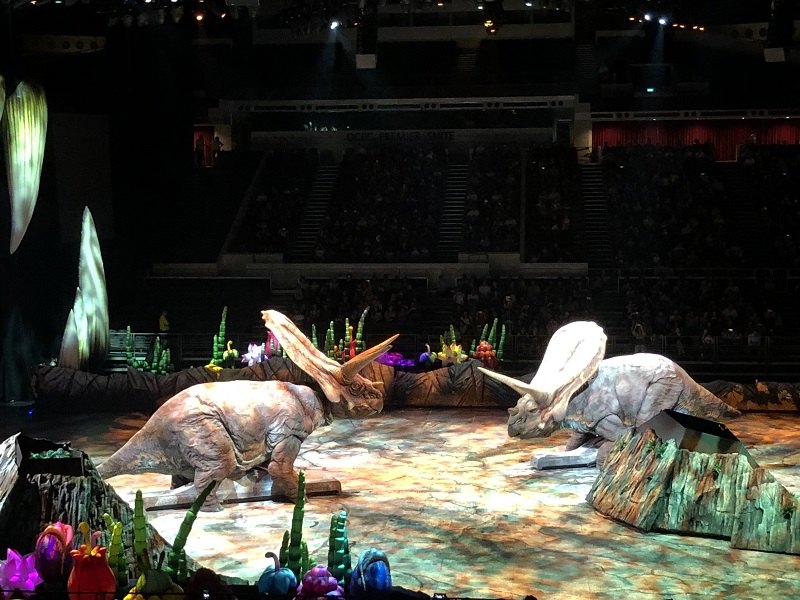 Besides the dinosaurs, kids get a great education on how the earth evolved through the Triassic, Jurassic and Cretaceous periods, from how one giant continent Pangaea split into the various continents that we know today, to how plants and flowers slowly developed and with that the adaptation of the herbivores and carnivores as well. 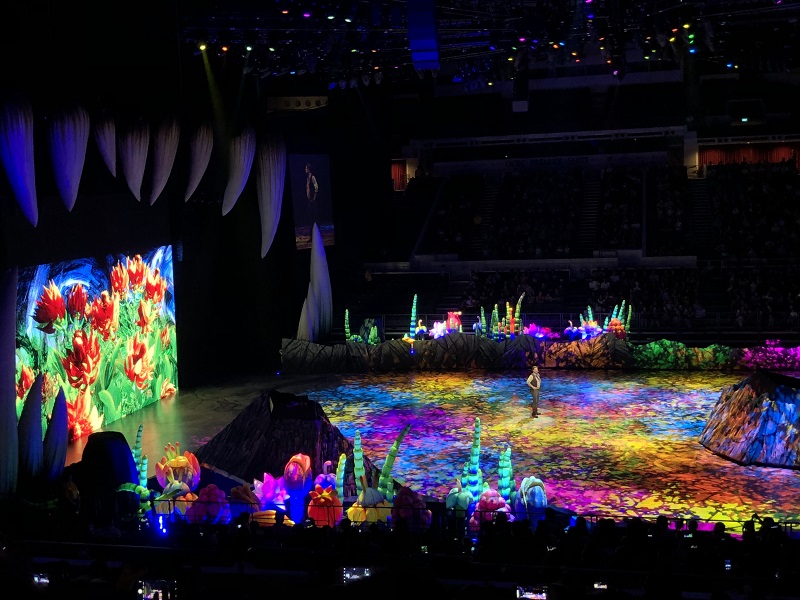 The world evolves as flowers start to appear.

This is probably the closest we’ll ever get to experiencing what real life dinosaurs were like. Bring your kids down before this opportunity goes extinct. Stegosaurus warding off an attack from Allosaurus

Tip: Try and get the Cat 1 tickets directly facing the stage (Sections 120 to 122) as these seats offer the best up close and personal interaction with the dinosaurs.

WHAT: Walking with Dinosaurs – The Live Experience