What's On
You are at:Home»Education»Trails of Tan Ah Huat Transports You Back in Time
By Wei Kurk Fong on May 30, 2019 Education, Singapore, Travel

Ever wondered what it is like to be a tourist in your own backyard? Cliched as it may sound, we often miss out on the treasures around us when we only look beyond our shores. The recently launched Trails of Tan Ah Huat by travel agency Let’s Go Tour Singapore is an award-winning guided cultural tour curated along the lines of a medicated oil salesman named Tan Ah Huat and his life in Singapore in the 1920s. 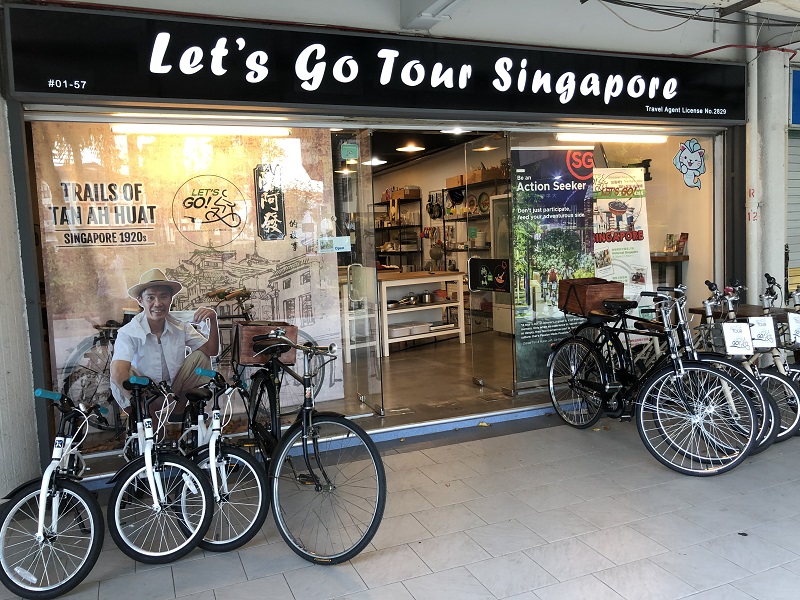 This bicycle tour promises to be highly entertaining and educational, especially for the kids. Not only do you get to see various key landmarks in Singapore (not to mention highly Instagrammable hotspots!), you also get to learn about our rich history and cultural heritage at the same time. 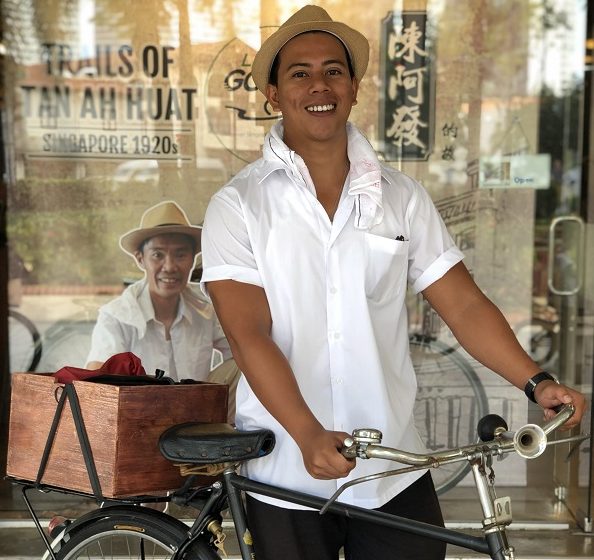 Our Guide for the day riding the Flying Pigeon

The tour kicks off with a safety briefing and bicycles (which are provided) are adjusted for each user. Adults are given the classic trishaw rider hat and Good Morning towels to complete the Tan Ah Huat look. 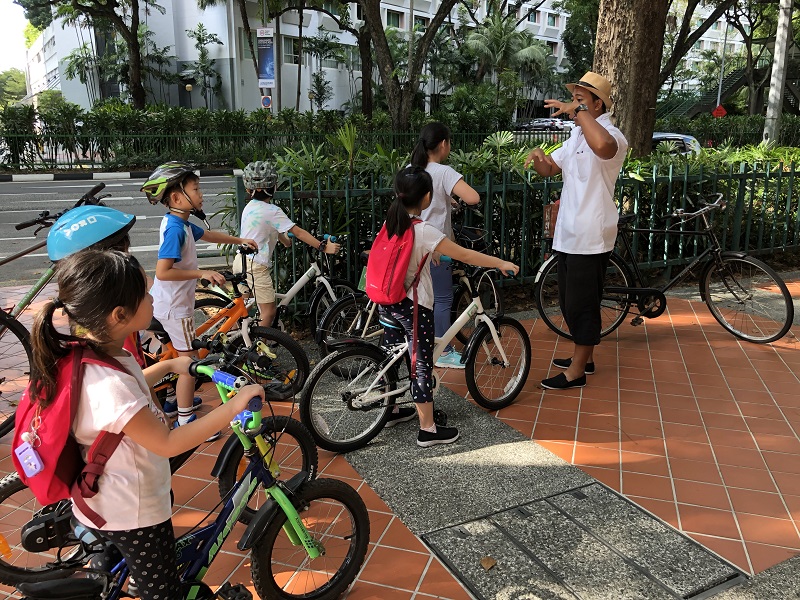 Explaining the origin of the name for Beach Road

Our first stop is along Beach Road, where our guide explains the origin for the street’s name and how the sea originally came right up to this point before land reclamation brought about the Marina Bay area that has now become an icon of Singapore. 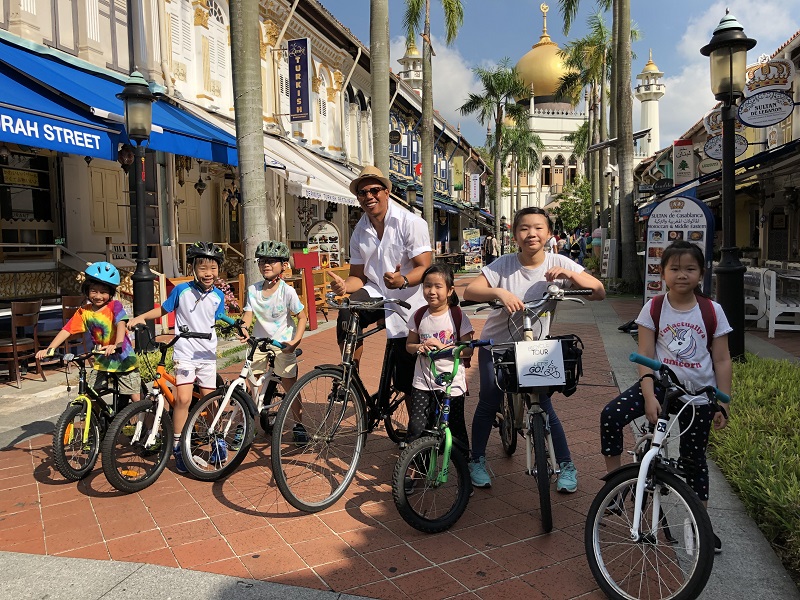 Outside the Sultan Mosque at Kampong Glam

At our next stop outside Sultan Mosque, our guide whips out iPads for the participants to watch pre-recorded videos of how Tan Ah Huat rode his bicycle around Kampong Glam selling medicated oil in the early years, and how one Mohammad Zufrie became his distributor after befriending him and offering Tan Ah Huat his favourite nasi lemak. This fictitious story was an interesting and engaging way for us to learn about the history of Singapore. Video introduction to the life of Tan Ah Huat

The tour takes you through the hip graffiti-art adorned Haji Lane to the more solemn and imposing Cenotaph and the Civilian War Memorial Park commemorating those who died in World Wars I and II, past the soon to be re-opened grand old dame of Singapore, Raffles Hotel, and onto the historical Cavenagh Bridge, Singapore’s only suspension bridge astride the Singapore river. 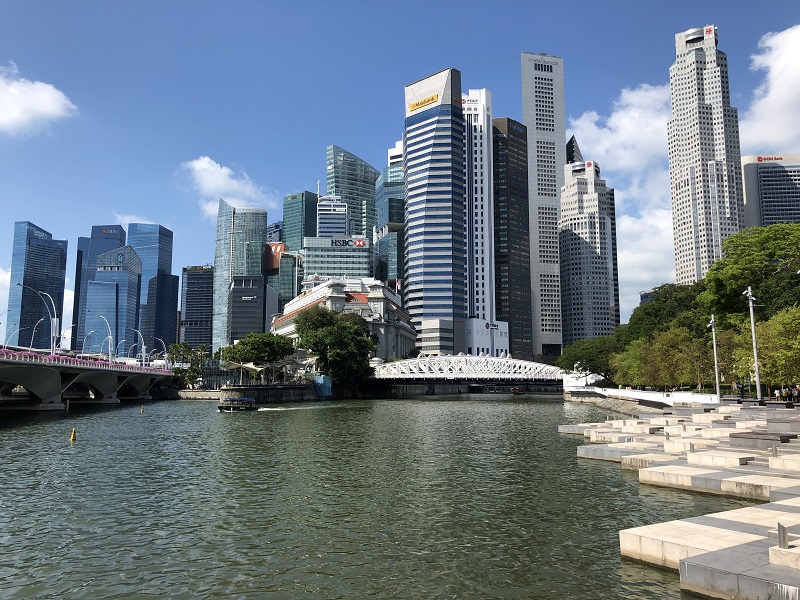 The beautiful Singapore skyline along the ride 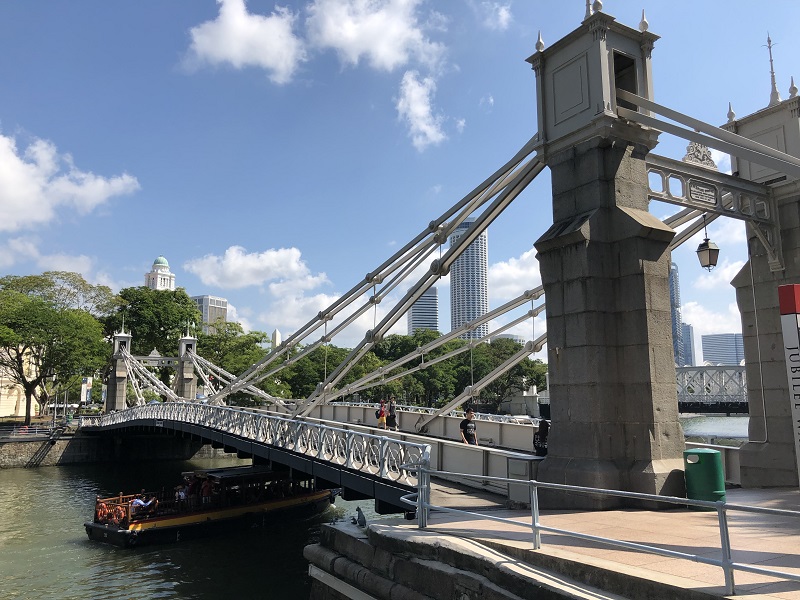 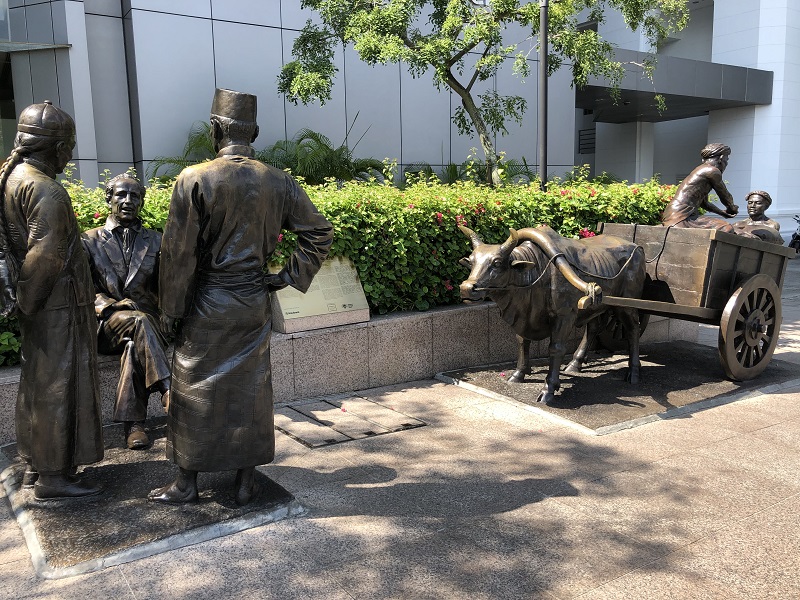 One of the most fascinating stops was at Pek Sin Choon, one of the oldest tea merchants in Singapore established in 1925. This family-run business continues to blend and roast its own tea here in Singapore. We were given a tour of the premises and got to see a tea roaster made in Singapore that’s over 30 years old and still in use! 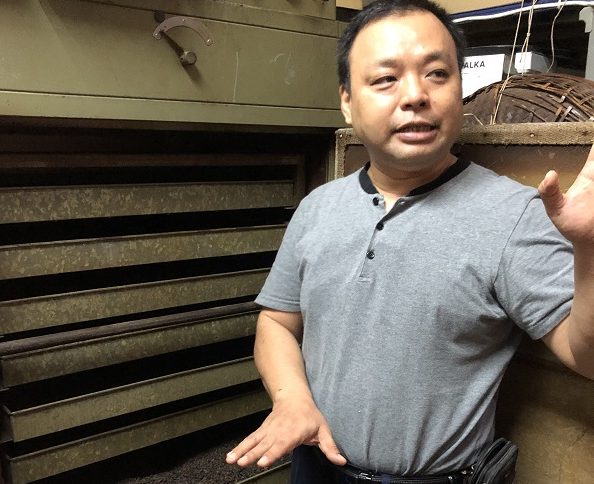 Now you know what a tea roaster looks like! 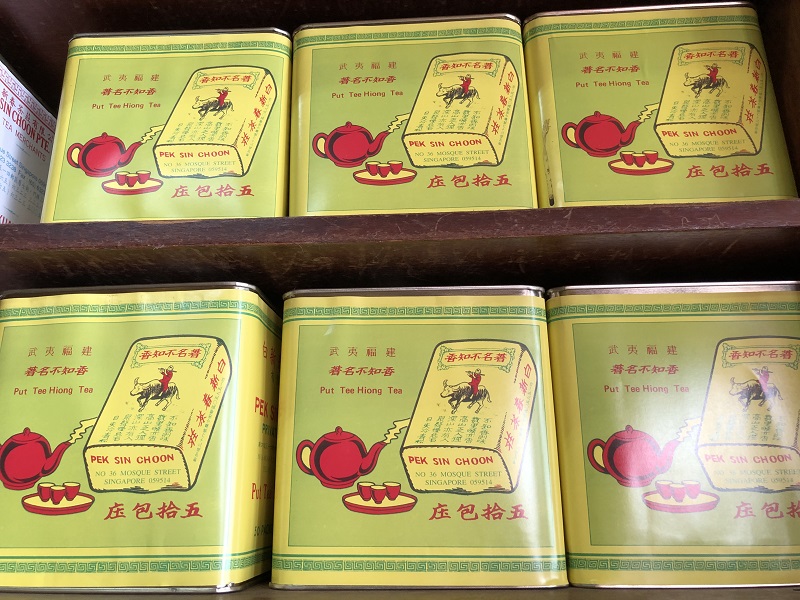 This is what goes into your Bak Kut Teh

Did you know that more than 80% of the tea used for Bak Kut Teh in Singapore, made from a blend of Wuyi and Anxi tea leaves, comes from Pek Sin Choon? Legend has it that in the early days, Bak Kut Teh was made using inferior tea and the owners of Pek Sin Choon set about changing that, resulting in the loyal following they have now. 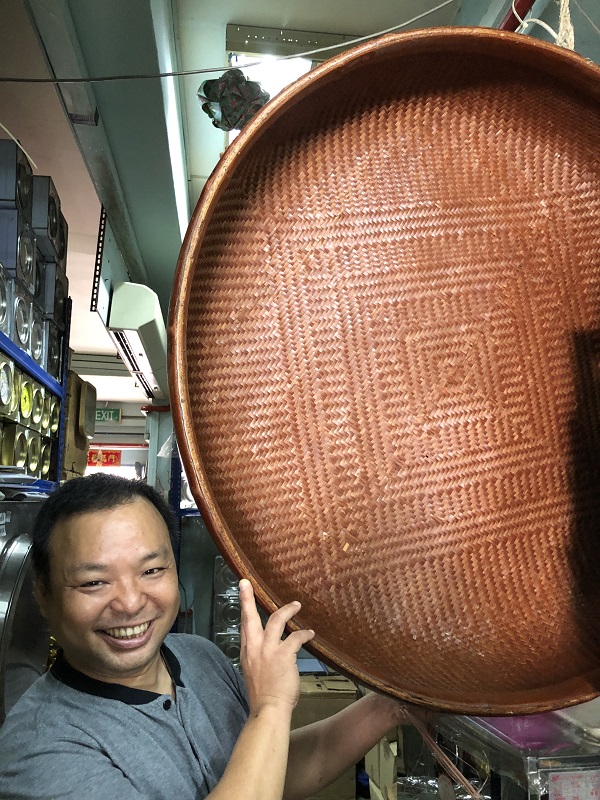 A rest stop at Nanyang Old Coffee in Chinatown gives your legs a breather while letting you enjoy some traditional snacks paired with old school tea or coffee. Here, kids get to experience your childhood (assuming you’re old enough!) with artefacts from yesteryear such as the milo tin used as a cash register, Tikam Tikam, and the old Chinese tear-away calendars. 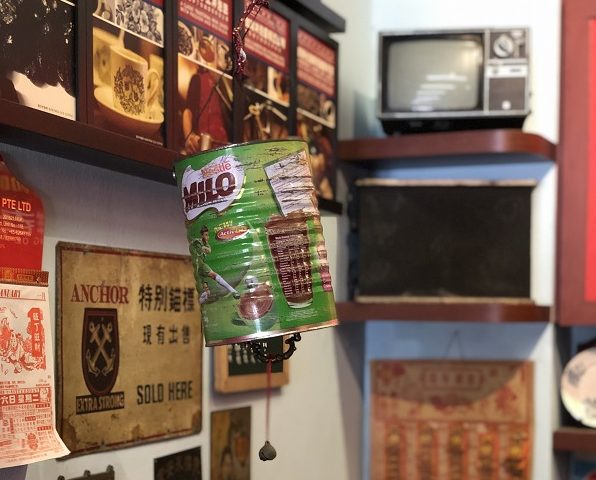 How many of these do you remember?

Robin Loh, founder of Let’s Go Tour Singapore, gave the children a taste of a bygone era when he explained to them why coffee was made with socks in the past and why people drank coffee from a saucer instead of a cup. When you’re here, don’t forget to check out the cool caffeine-inspired quotes etched all around on the walls. 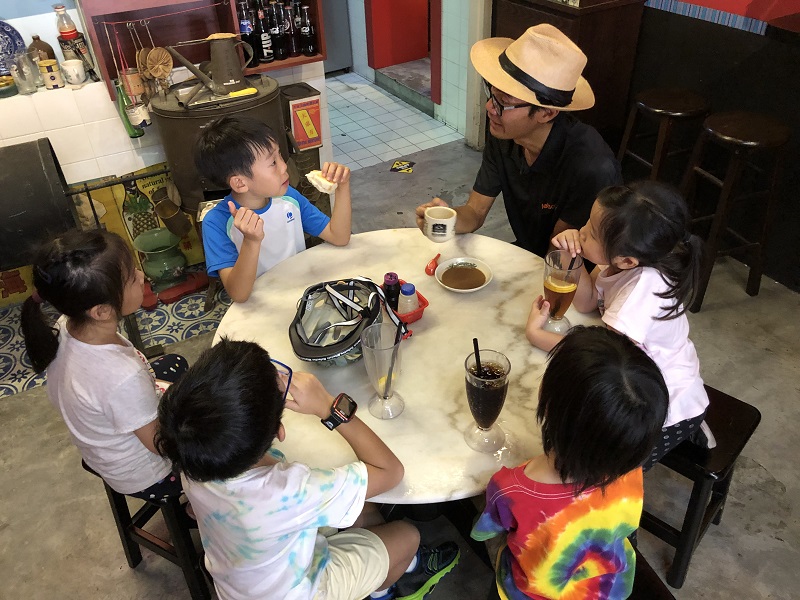 On the return route, I was surprised to see that remnants of the former ‘Thieves Market’, a flea market at the now defunct Sungei Road where enterprising hawkers sold goods that were sometimes thought to be stolen, still remained in some forgotten alleys. As we rode onto the Formula One racing track, the kids got a thrill out of speeding down the wide track without any danger from cars or pedestrians. 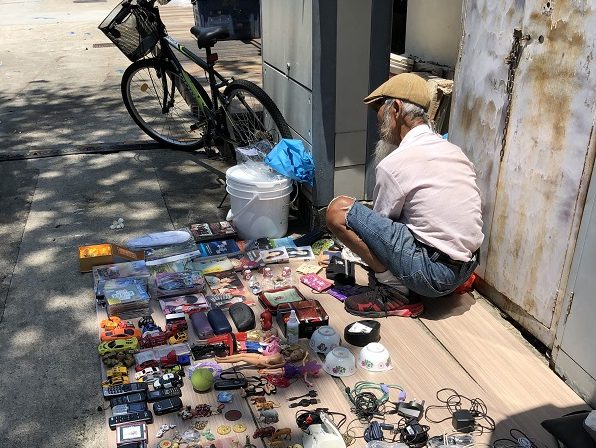 And the race is on!

As we make our way back to Let’s Go Tour Singapore’s shop at Crawford Lane, we discover from Robin that Hill Street Tai Hwa Pork Noodles is not the only famous place in the immediate vicinity. A stone’s throw away sits Heap Seng Leong, a coffeeshop steeped in history where kaya toast and coffee is cooked using charcoal for that rich smoky taste. This is also one of the rare few remaining places where you can get SG-style bulletproof coffee (i.e. coffee with a thick slab of butter) made by an 82-year old uncle complete with the classic white singlet and pyjama pants! History buffs will be thrilled to discover the origin behind the bulletproof coffee in Singapore.

Apparently, in the olden days, opium smokers would get very dry throats. To get some relief, they would slide a thick slab of butter down their throats before drinking their coffee. And that is how the bulletproof coffee developed in Singapore. 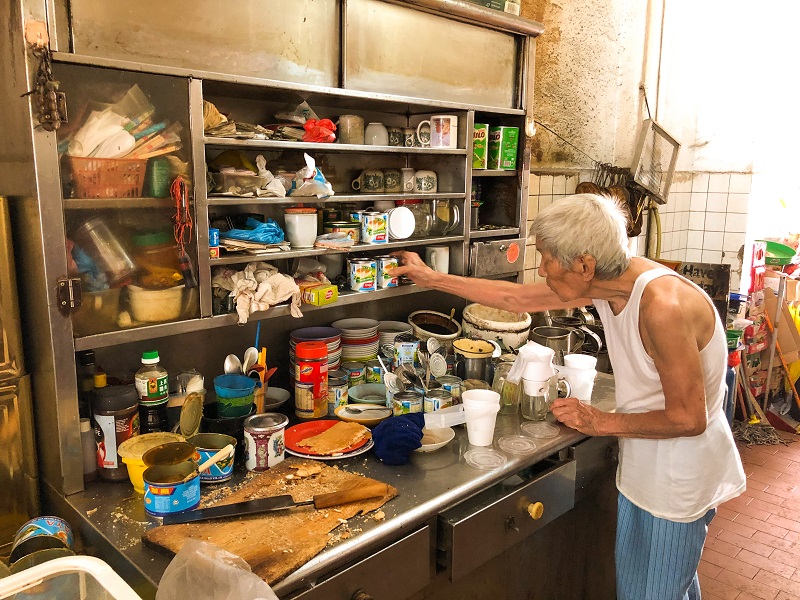 So, if you ever want to give your kids an insight into a fast disappearing facet of Singapore, take in the sights of many historical landmarks and get a good workout all at the same time, let Tan Ah Huat bring you on an unforgettable ride. 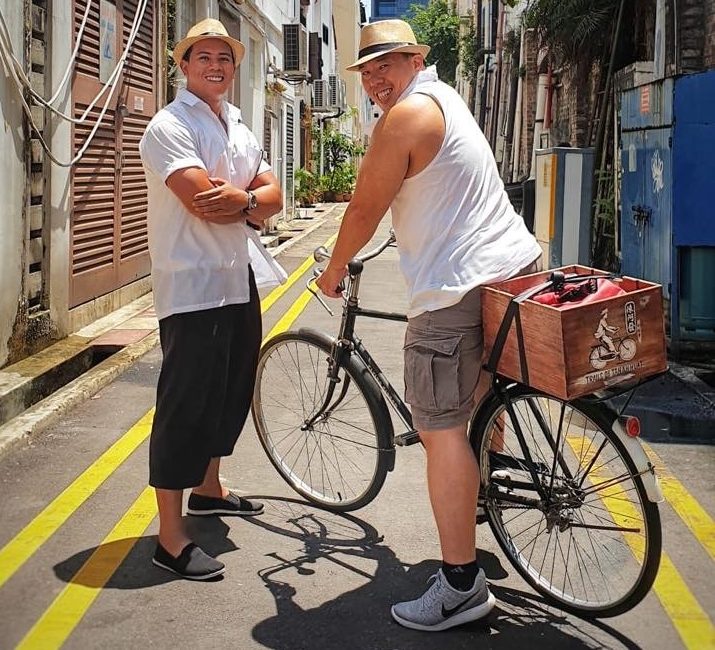 Will the real Tan Ah Huat please stand up?

Tours are by appointment only so do book in advance. The tour takes about four hours and costs S$99 per person.