Everyone’s favourite baking products and equipment supplier – Phoon Huat – has gone upmarket with its newly revamped delicatessen – Phoon Huat Deli. Although it has been around since 2015, when it was known as PH Delicatessen, the deli’s products on offer have gone up a few notches.

Billed as a one-stop shop for gourmands, with the aim of bringing premium foods to the masses at affordable prices, Phoon Huat Deli now offers top quality produce including A5-grade Miyazaki wagyu beef from Miyazaki Prefecture of Japan, Mishima Reserve beef from Japan, iberico pork from Spain and Bluefin tuna from Japan. Chef Chia puts the finishing touches to the seafood tart.

We were in for a sumptuous treat at its recent launch when home chef Chia from Snowcology was invited to whip up some gorgeous creations showcasing the quality of the products available at Phoon Huat Deli. It is quite unfathomable that Chia is merely a home cook, with a day job in the marine industry, as his cooking techniques and food presentation skills are undoubtedly of a Michelin-star standard.

First up was a delightfully delicate looking seafood tart consisting of, get this, 18 types of ingredients! Along with various types of sashimi, it was filled with smoked meats, Oscietra caviar, soya sauce pearls, ikura and edible flowers, all arranged beautifully atop a special bread commissioned by the Spanish King. 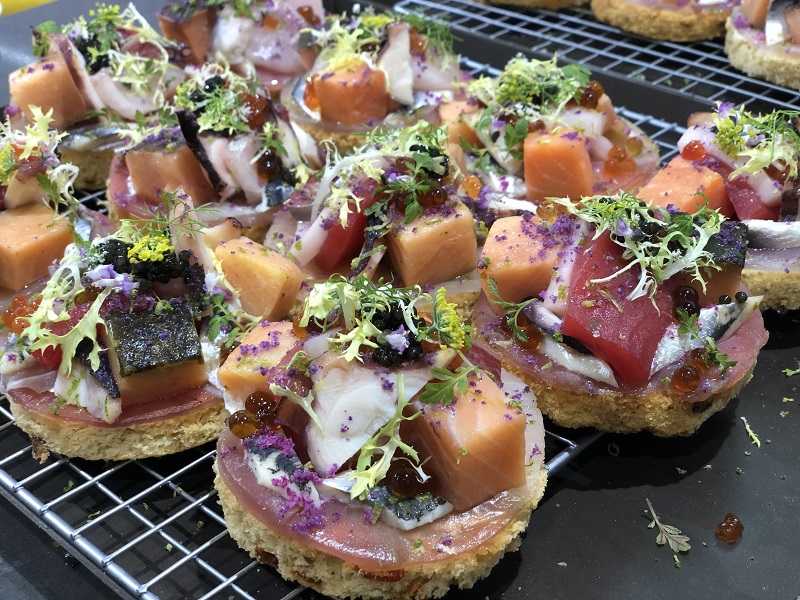 The amazing seafood tart is a work of art.

All these ingredients can naturally be found in Phoon Huat Deli itself. The sashimi counter, with its ready-to-eat sashimi platters, sushi and donburi, look particularly popular each time I visit. 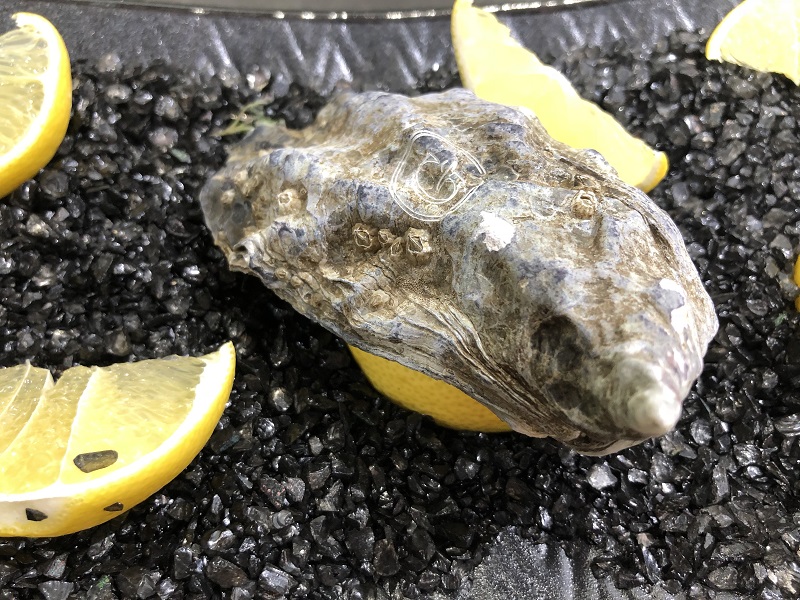 Notice the ‘G’ on the Gillardeau oysters.

Before my eyes could even recover from the visual feast, my tastebuds were called into action again – this time with the Rolls Royce of oysters – Fine de Claire special oysters from Maison Gillardeau of France. Each shell is specially laser engraved with the letter ‘G’. Maison Gillardeau is the only company in the world to do so and is a mark of quality of the oysters. Ordinary Fine de Claire oysters have a weight guarantee that includes the shell, but only Gillardeau oysters guarantee the weight and plumpness of the oyster flesh itself. The result is an oyster that is so plump and juicy like no other you’d have tasted. At S$9 a pop, it’s certainly worth it! 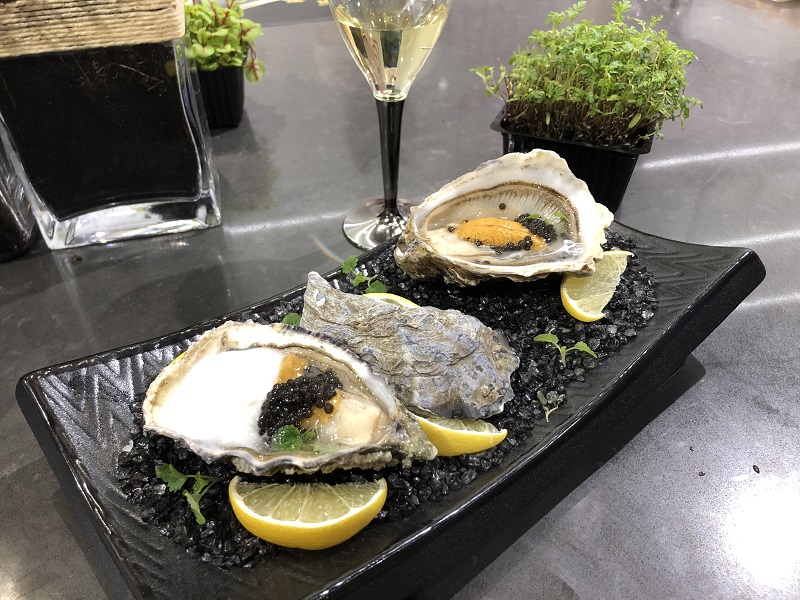 Although I generally like my oysters straight from the shell, with a light squeeze of lemon at the most, Chef Chia really luxed it up by topping the oysters with Bafun Uni and Oscietra Caviar from The Royal Belgian Caviar. As explained by Phoon Huat director, Wong Deli (yes, yes, that really is his name), 90 percent of the world’s caviar is reprocessed and repacked. Royal Belgian caviar, however, go straight from the sturgeon to the tin, thus minimising oxidation and leakage of the caviar. It is also the only producer in the world of white caviar, harvested from albino sturgeons. 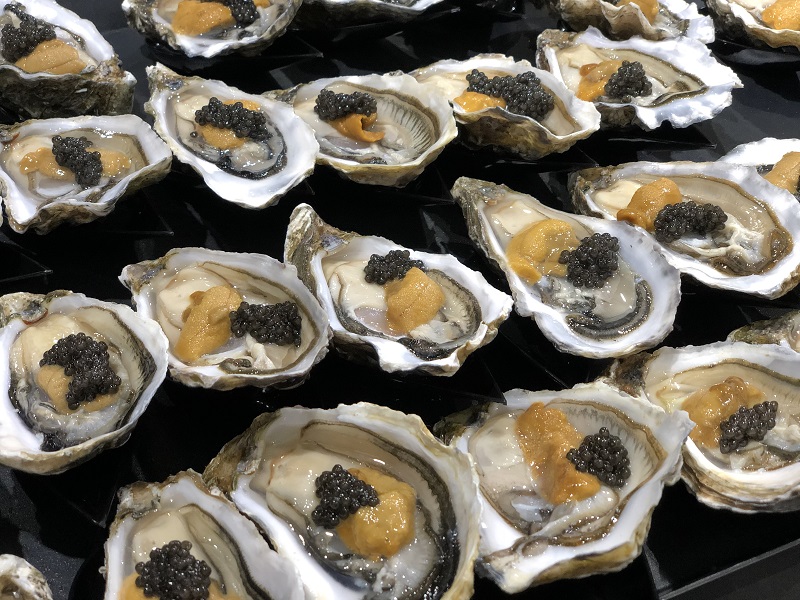 The star of the show was probably the Carabinero prawns, also known as Scarlet Prawns due to its distinctive colour. These large prawns are specially harvested in the deep waters of the Mediterranean at a depth of 3,000 to 5,000 feet and thus convey a taste of the deep sea. Wong declared that the prawns taste better than lobsters. One bite into these prawns and you’ll know he wasn’t boasting. The prawns really do have a very distinctive taste and fragrance. 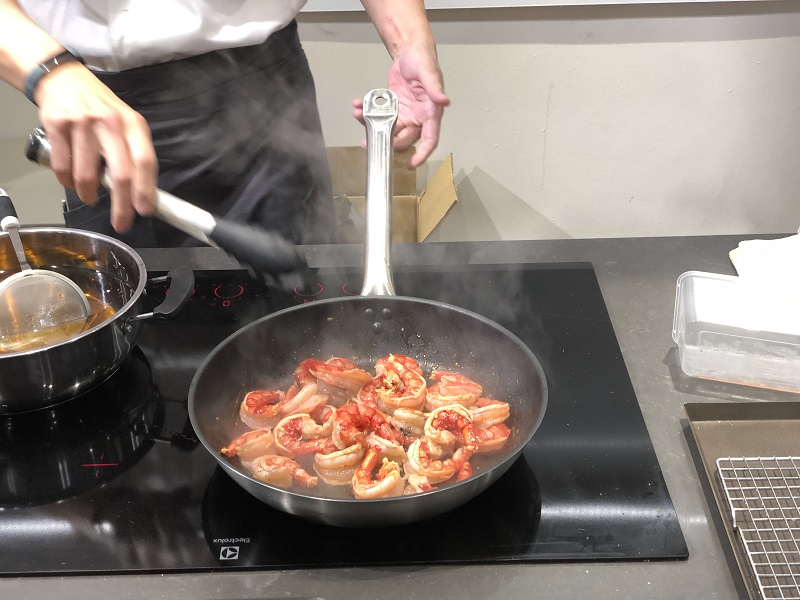 Check out the colour of the Scarlet Prawns 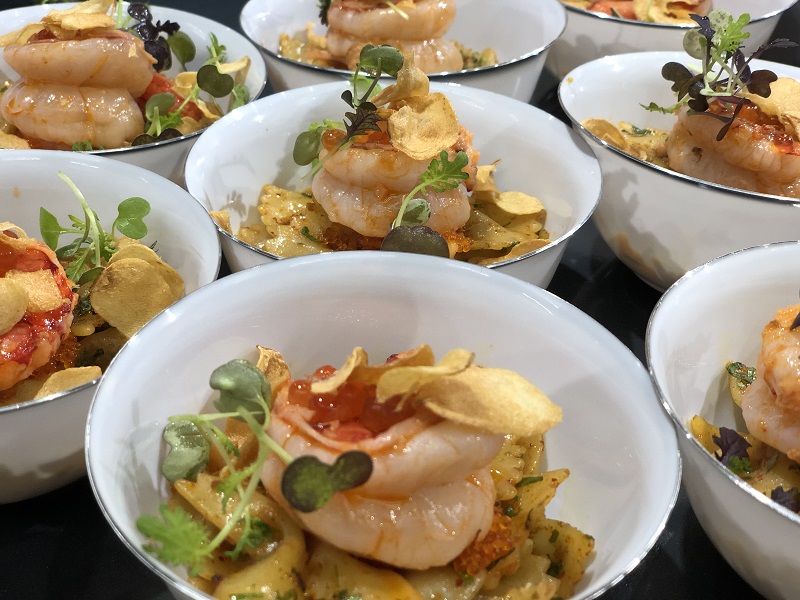 Just when I thought I’ve had enough indulgence for the day, Chef Chia whips up a juicy A4 Miyazaki Wagyu Sando, with bread buttered with beef jus emulsified in butter and truffle oil. Heavenly. Normally at tastings, everyone is quite polite. But when asked if anyone wanted second servings of this, hands shot up eagerly everywhere. 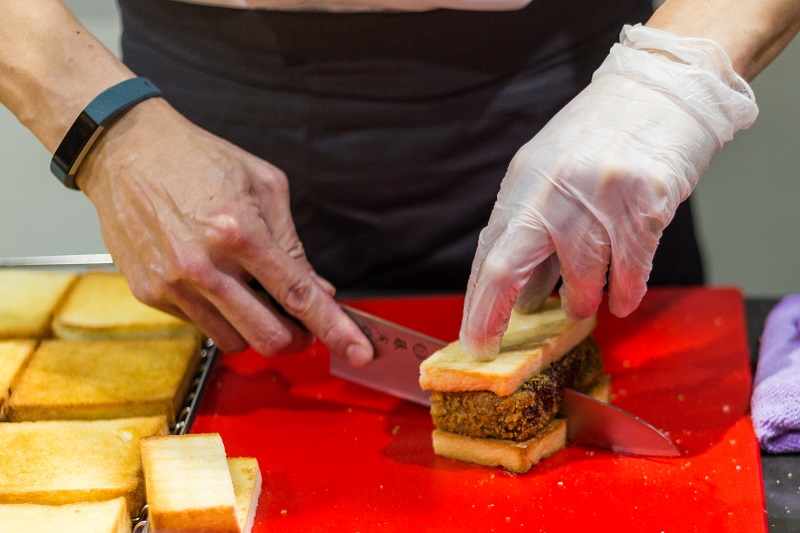 I’d think after all the epicurean delights, I’ve tried all the best the store has to offer. That’s when the Phoon Huat director whispered into my ear that if I am someone who really appreciates my meats, I would have to try this particular cut of wagyu beef that is incredibly tender and versatile with top-grade marbling. The best part of it is after I’ve eaten it, I was not left with the feeling I’ve just drunk half a litre of cooking oil. And guess what, it’s much cheaper than normal wagyu cuts! I cooked a piece the very next night and everyone loved it. I’m sorry if it’s sold out as I went back and bought two more!

Unfortunately, the Phoon Huat director has sworn me to secrecy and forbids me from revealing the identity of this cut. I think he secretly wants to eat them all himself! All I can say is that it is quite rare as each cow only produces a very small portion of it and I have never seen it sold elsewhere before. This, to me, is a true testament to the quality and distinctiveness of the offerings at Phoon Huat Deli. 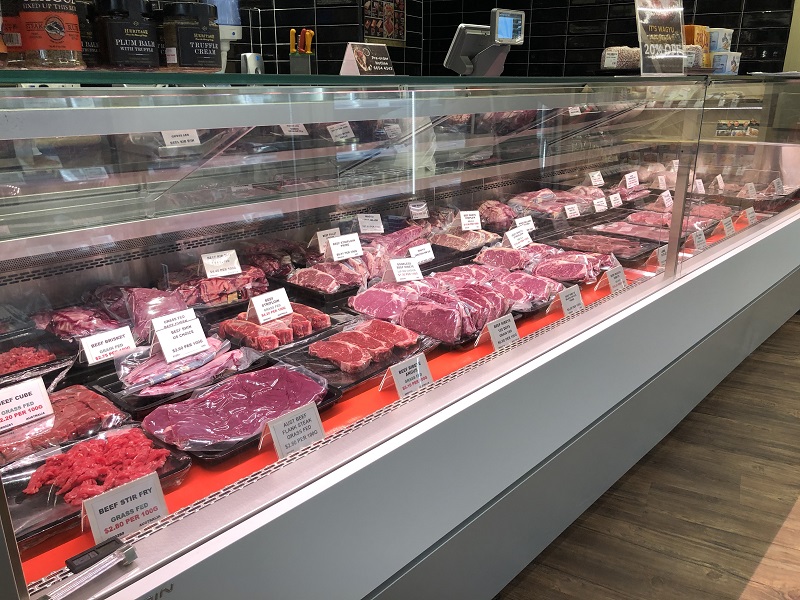 See if you can spot the special cut in this picture

P.S. if you make friends with the friendly butcher at Phoon Huat Deli, he might just tell you about the special cut of beef.

For home delivery and retail enquiries, customers can call the hotline at +65 6654 4333 or email [email protected]

Opening hours: Daily from 10am to 10pm