In today’s music industry, an album usually takes a few months from conception to launch. Bucking this trend, L.O.V.E., Eason Chan’s latest album set to be released in November later this year, is an album six years in the making. Conceptualised in 2012 with his band mates while on his DUO world tour, the first song was recorded back in London on 22 April 2012.

Of the 11 songs in the album, eight are Cantonese, two are Mandarin, and one English. To date, three songs have been released, namely 漸漸，与你常在 and 可一可再. Fans who purchased these songs online were treated to an up close and personal session with Eason last Saturday afternoon at the newly minted Singapore Chinese Cultural Centre Auditorium. 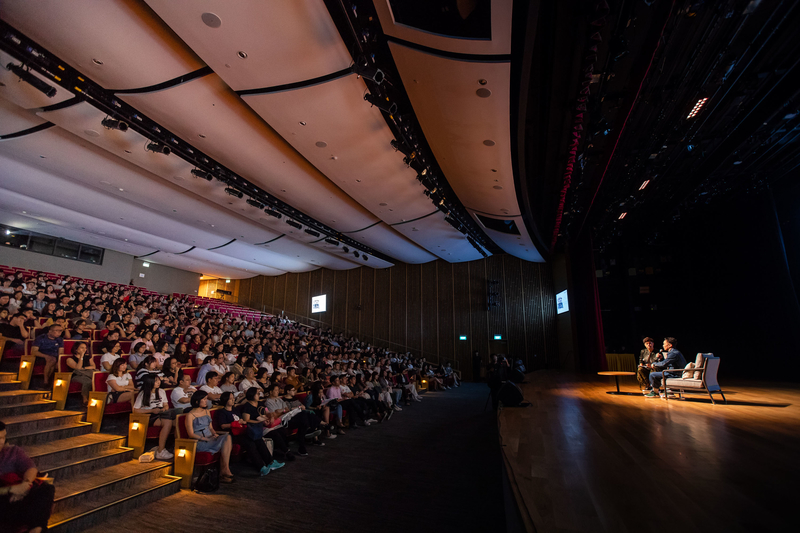 Aptly named E起Chan 談L.O.V.E. (loosely translated as “Let’s talk about L.O.V.E. together”)，the event was a music sharing session hosted by former radio DJ, Danny Yeo. Dressed in denim jacket and jeans, Eason was a picture of cool. Well known for being chatty, Eason did not disappoint. Throughout the 1.5-hour session, he spoke candidly and fluently in Mandarin, English, and even obliged his fans with smatterings of Cantonese. 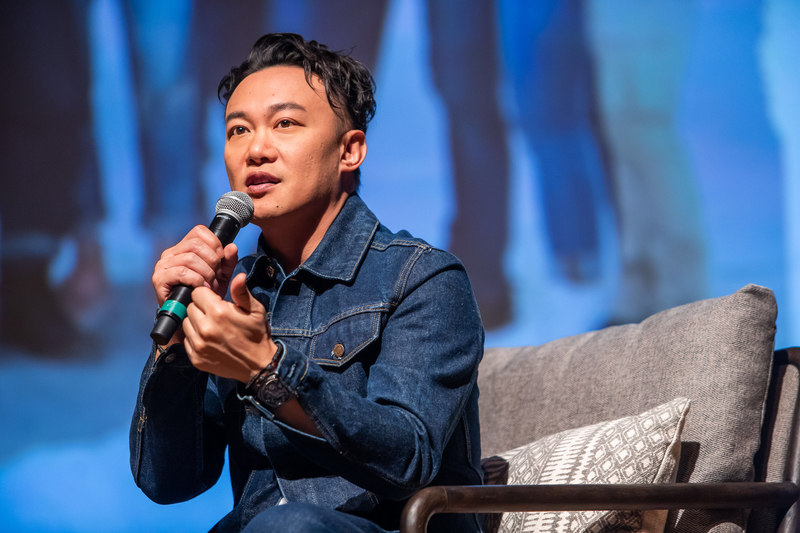 One reason the album took six years was due to the fact that the majority of the songs were recorded as “live takes”, where all the musicians gathered in the studio and recorded the songs together. It was no mean feat to re-gather all band members, as they have all moved on to new endeavours in their respective careers. Besides London and Hong Kong, recordings took place as far as Canada. This album is, indeed, a labour of L.O.V.E.

Three new songs were introduced at the session: 破壞王 (“We Zzzid It”), 龍舌兰 (“Tequila”), and《瘋狂的朋友》(“Crazy Friends”). “We Zzzid It” and “Crazy Friends” are upbeat numbers describing the relationships amongst the band members, and “Tequila” is a slow burn number with a hint of Spanish Flamenco. Eason shared the creative process as well as the funny stories behind each song. For example, 可一可再, the song which he wrote the music for, he recalled how the tune came to him while he was on vacation in New Zealand. It was against the backdrop of green grass and blue sky that he started humming the tune that would later become 可一可再.

Throughout the session, it was evident Eason shares a strong bond with his DUO band members. All 13 members contributed to the 11 songs in the album in various capacities. There is even a collection of videos documenting the entire process, which by Eason’s own reckoning will take one month to watch. They are in the process of cutting it down to two hours, and the edited video will be released officially (date yet to be announced), so fans have another reason to rejoice. 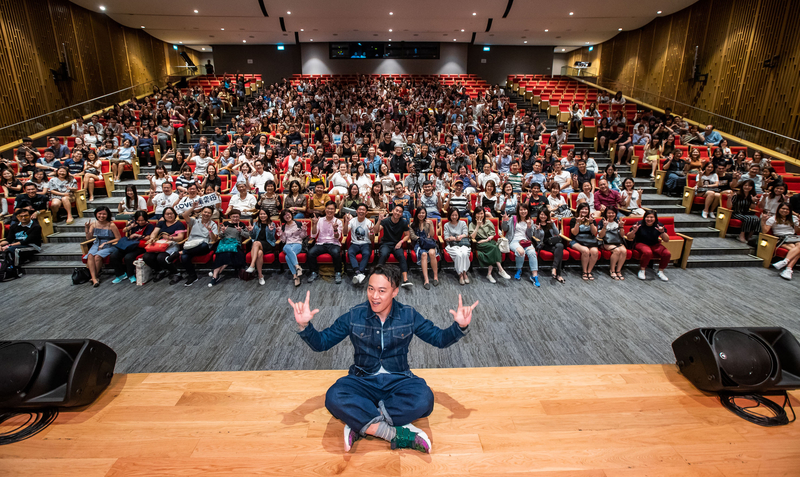 At the end of the session, Eason threw a surprise and spent an additional hour shaking hands with each fan, while handing out autographed souvenirs. As expected, his fans were overjoyed. The energy in the auditorium was palpable and the fans gamely waited for their chance to interact with their idol. It must be said that everyone was extremely well-behaved and queued up patiently! 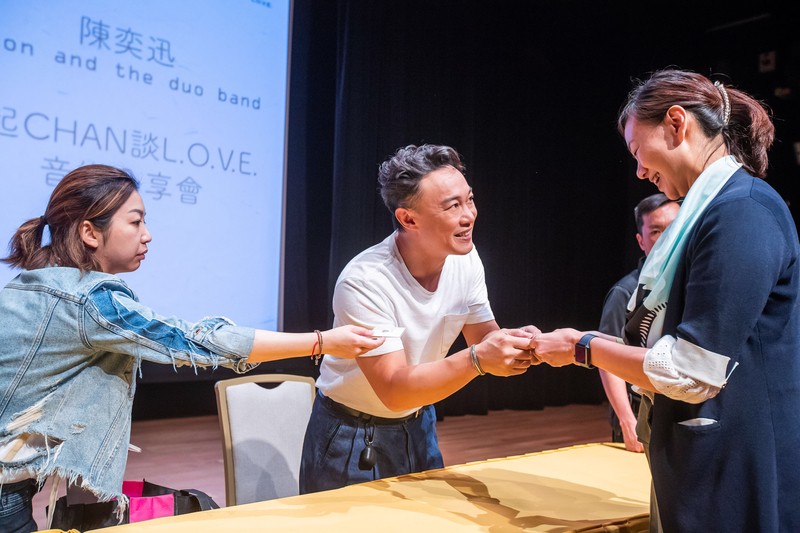 Eason shaking hands with each and every fan / Photo credit: 環球音樂 Universal Music 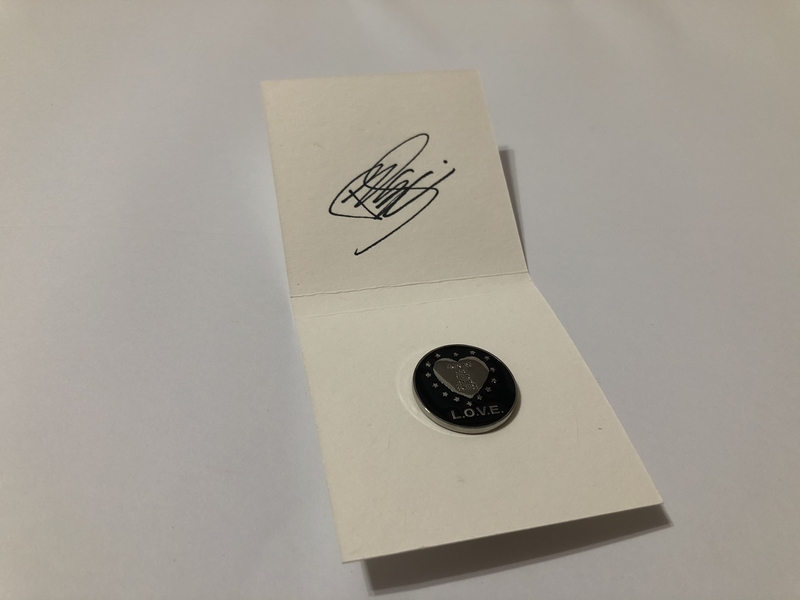 《L.O.V.E.》souvenir, personally autographed by Eason. Each fan received one.

Eason then adjourned to a closed door session with the media. Despite the long and tiring afternoon, Eason was the consummate professional. He engaged each journalist with the kind of earnest that made you feel like you were talking to an old friend. He is every journalist’s dream, as there was never a dull moment with Eason.

When asked if it was difficult in his new capacity as a boss (he has his own music label, EAS Music), he jokingly said he was just in charge of signing cheques. When asked if setting up his own company was the “craziest” thing he has done (in reference to his song, “Crazy Friends”), he said no, because he has a great team supporting him. He then went on to describe the craziest thing he has done: skydiving

When asked if he had ever considered doing a musical, Eason revealed that as far back as 10 years ago, he had entertained that thought. It never materialised but Eason shared that he keeps an open mind. Even at 44, he is still learning and enjoying performing. He feels he still has 26 years before he hits another peak at age 70.

At the end of the session, Eason was asked about his future plans. Nothing concrete, but he is keen on an album of duets with his friends from the industry. Names dropped include Kit Chan, Tanya Chua, and JJ Lin. While still a pipe dream, he draws inspiration from Elton John’s album “Duets” released in 1993. Let’s hope this dream of Eason’s come true!

Selected songs from L.O.V.E. are available on iTunes. Watch out for the full album launch in November.

Kenneth is a hands-on dad, which means time is a precious commodity to him. If he has time to write this article, you have time to leave a comment. Do it. Please.