What's On
You are at:Home»Automotive»CAR REVIEW: Toyota C-HR – A “Stupendous” Ride
By Wei Kurk Fong on August 6, 2018 Automotive, Singapore

When I first picked up the Toyota C-HR for a weekend test drive, I must confess I wasn’t expecting too much. First, I knew little about the car as I have only owned continental cars since my very first car, the Toyota Vios. Second, the typical Japanese mass market car evokes notions of a safe and reliable drive (read: boring, and boring). Let’s face it, other than models like the The Fast and the Furious Toyota Supra, drift king Toyota Corolla AE86 GTS, the early generation Rav4s (my dream car growing up), and the classic and uber-sexy Toyota 2000GT, “cool” and “head turner” are not words you’d readily associate with a Toyota car.

I was about to be proven wrong. Very wrong. She’s Got The Look

As I drove the C-HR on the normally unforgiving Singapore roads, it seemed a little more than my imagination when I found other cars giving way to me more than usual. I soon realised they were probably too busy admiring my ride to rush to squeeze into every available gap. With its new ‘diamond architecture’ themed exterior with the use of sharp lines and smooth curves to give the car a gemstone design look, the all new C-HR indeed proved to be a real head turner. The lower body, raised ground clearance and muscular wheel arches all conspire to give this SUV a sweeping aerodynamic look. 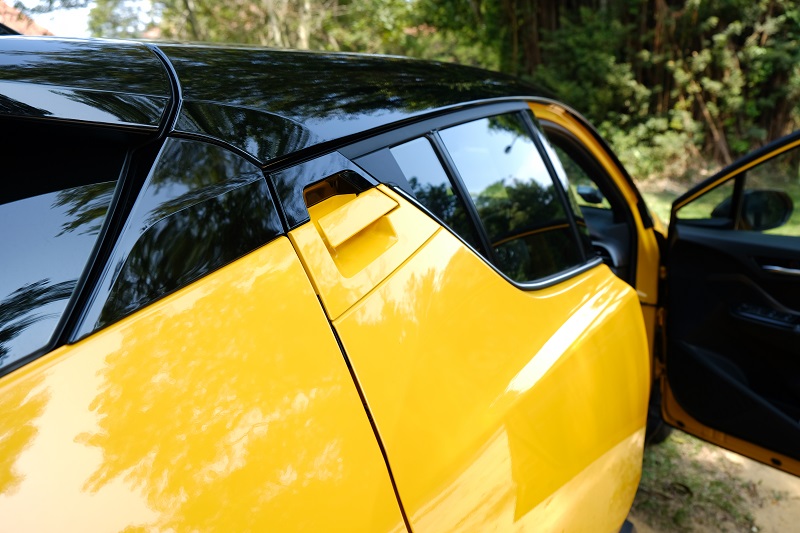 Although a supposedly compact crossover, the distinctively sporty and muscular design lends the car a surprisingly enlarged look. The coupe-like cabin and disguised door handles draw its fair share of supporters and detractors alike. Those who dislike it find the small rear windows make sitting at the back feel claustrophobic and somewhat nauseating. The rear door handles are also too high for young kids to open on their own (although that might ironically help preserve your doors from accidental damage against walls and other cars). 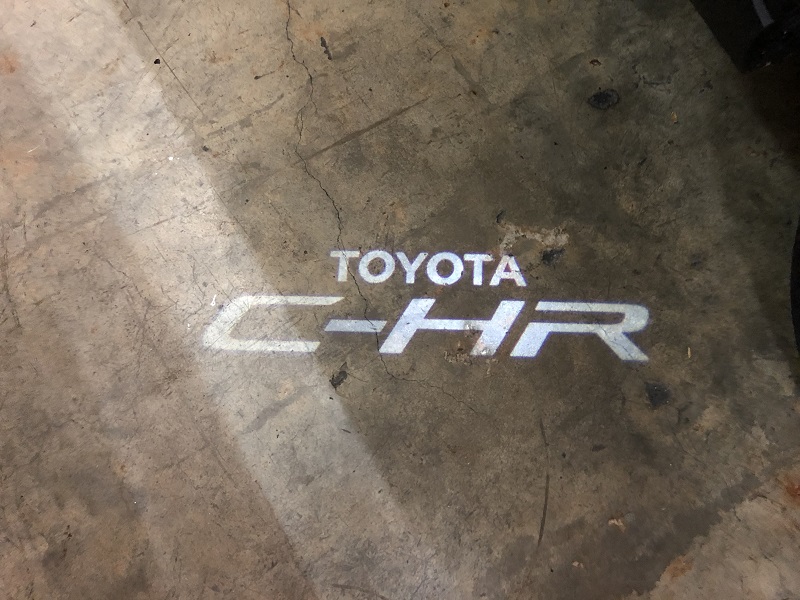 Toyota C-HR being projected on the floor from the door.

Gape in awe as you rest your hand gently on the front door handles and marvel at the words “Toyota C-HR” being projected on the floor. I find myself repeating this action, like a kid reaching into the cookie jar sheepishly, just to experience this thrill again and again. The unique arrowhead design for the rear combination lamps is something you expect to see on a high-end continental car, and even then, is not a design I’ve seen replicated elsewhere. Sweep-action sequential turn signals in the front headlamps only serve to make the C-HR feel like a million bucks.

Overall, the C-HR is clearly popular for its looks, due in no small part to the dual tone colours available for the luxury variants (think more hip and funky MINI countryman than the conventional staid Toyota style). Pictures I posted online to tease my friends of my ‘new ride’ elicited widespread approval. As my 6-year old son aptly summed up when he laid eyes on her, “this car is stupendous!”

The designers have clearly put a lot of thought into designing the all-new C-HR, both inside and out. The diamond motif extends to the interior trim as well and shows up in rather surprising places – up on the ceiling and even hidden behind the rear seat belts. Part of the fun is identifying where all the diamond designs in the car are! 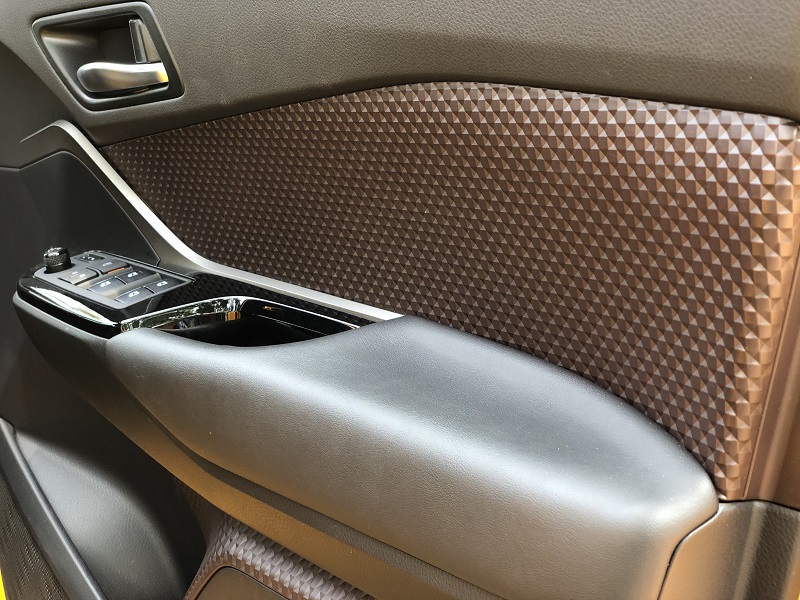 Diamond motifs on the side trim

The soft-touch materials used on the upper door trim, arm rests and dashboard convey a premium feel. I particularly liked the touch of the leather-wrapped steering wheel. The major controls and displays are oriented towards the driver, granting ease of access when driving. The multi-information display with opitron meter within the driver’s line of sight sports a digital speedometer which I appreciate tremendously as it helps me stay within the speed limit more easily.

The Toyota telematics system comes with touch-screen functionality and allows you to access your music from your mobile device, place calls and, for the luxury variant, navigate as well. This feature was a major let-down though. Unlike a navigation app like the very intuitive Waze app which lets you to type in keywords and then offer suggestions immediately, the Toyota car navigation system is decidedly dated and requires you to key in precise addresses, right down to house numbers and towns. Only if you use the search function instead, which is not the most obvious choice, would it offer commonly searched suggestions. Even then, the routes suggested were more often than not wrong from my experience. It also does not seem to take into account traffic build up the way the Waze app would.

One significant design feature that really stood out for me was the cup holders. This tends to be an area that is somewhat neglected by car designers as more of an afterthought or just a ‘standard requirement’. The ergonomic curves for the cup holders in the C-HR are not only functional but add to the attractiveness of the car as well.

With the C-HR, Toyota seems to have thrown the whole kitchen sink of features in, including multi-function steering, auto rain-sensing wipers, Nanoe auto climate air-conditioning that moisturises the cabin air while neutralising pollen and odour-producing particles, auto headlamps, auto folding side mirrors, noise-reducing acoustic glass, etc. Whilst all these fancy features are very much welcome, I do wish Toyota had fixed the basics though. Manual ‘pump action’ levers for the seats just don’t cut it anymore in this day and age. 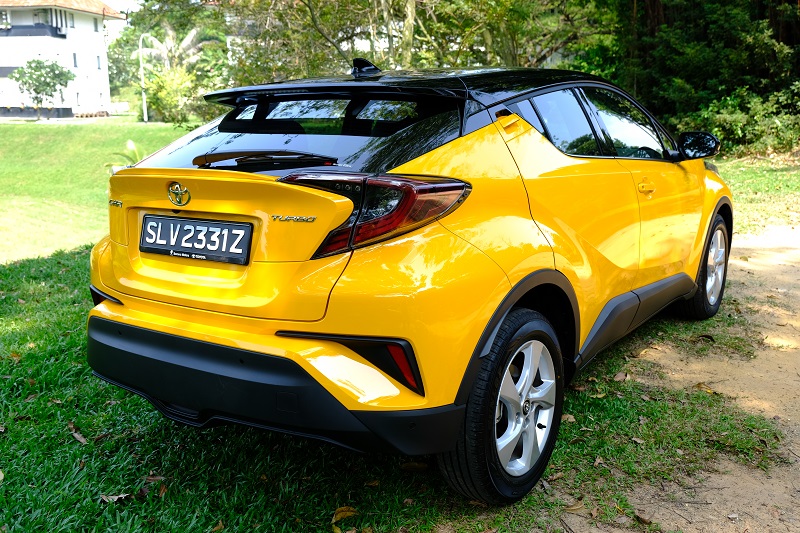 C-HR from the back

It is, however, in the safety aspects that this car truly stands out. Equipped with the Toyota Safety Sense Package, the C-HR is fitted with a variety of safety features with advanced technology to keep everyone safe. The Lane Departure Alert uses the car’s camera on the windscreen to track the vehicle’s course between lane markings on the road surface and will sound out as well as light up a warning on the multi-information display if it detects that you’re veering off track without actually trying to turn or switch lanes.

Dynamic Radar Cruise Control ensures a safe distance is kept from the car in front; Rear Cross Traffic Alert System assists you in reversing out of a parking lot even with visibility compromised; Adaptive High Beam System, Pre-Crash Safety System and 7 SRS airbags all around help keep you safe at all times.

One drawback I found, however, was the slight difficulty I faced with checking blind spots and when reversing the car into a parking lot due to the small and angled rear side windows. As an old-school driver, I insist on checking visually over my shoulders. Not to worry, though, as this is mostly negated by the Blind Spot Monitor System and Reverse Camera and will probably just take some getting used to.

All of the above means nothing if the drive turns out to be a lame stroll in the park. And this is where things get really interesting.

For a 1.2L turbocharged engine with a maximum power of 114bhp and peak torque at 185NM, this little dynamo sure packs a punch. Although it is unlikely to win a foot race against a 2L speedster, its engine behaves more like a 1.8L than 1.2L. In fact, it feels like it is always raring to go and wanting to challenge every other car to a race.

Its strength lies in its manoeuvrability, especially in lane changes. Coupled with very responsive brakes making you feel secure to push the car out of its comfort zone, the made-in-Japan C-HR proves to be a fun nippy drive. With a fuel efficiency of 6.4 litres/100km, ample boot space at 316 litres, lower road taxes and COE with its smaller engine capacity, there is little not to like about the Toyota C-HR — except perhaps the price. At S$114,988 for the Active, and S$126,988 for the Luxury (Dual tone) variant, based on non-guaranteed COEs, the C-HR is easily S$30,000 more expensive than the entry-level Vios and significantly pricier than both the Corolla Altis 1.6 and Sienta 1.5. The luxury C-HR costs even more than the Toyota Prius, although that is largely down to the Prius enjoying a S$10k Vehicular Emissions Scheme (VES) rebate whilst the C-HR attracts a S$10k VES surcharge.

The C-HR is also significantly pricier than its closest rival, the Honda HR-V, although it is on par with the Nissan Qashqai. That said, you just have to line all three cars in a row and the winner of the beauty contest stands out immediately and the choice becomes clear. I wouldn’t want to be caught driving the ubiquitous HR-V/Vezel that is synonymous with being the unofficial Grab car of Singapore, and the Qashqai, well, is just nowhere near as “stupendous” as the C-HR.

Note to my Editor: Look what you’ve done! I was supposed to just test drive the car, not actually buy it!