What's On
You are at:Home»Eat & Drink»Getting My Toes Wet with Japanese Brews at Sake Appreciate Singapore 2016
By Justin Teo | Senior Writer on November 6, 2016 Eat & Drink

I started this article with the headline “Deep Dive into Japanese Brews…”, before I caught myself;  Just because I had dozens of labels of Japanese sake to taste in a single night doesn’t mean I got to “deep dive” into anything; Getting I had merely gotten my toes wet with Japanese sake. 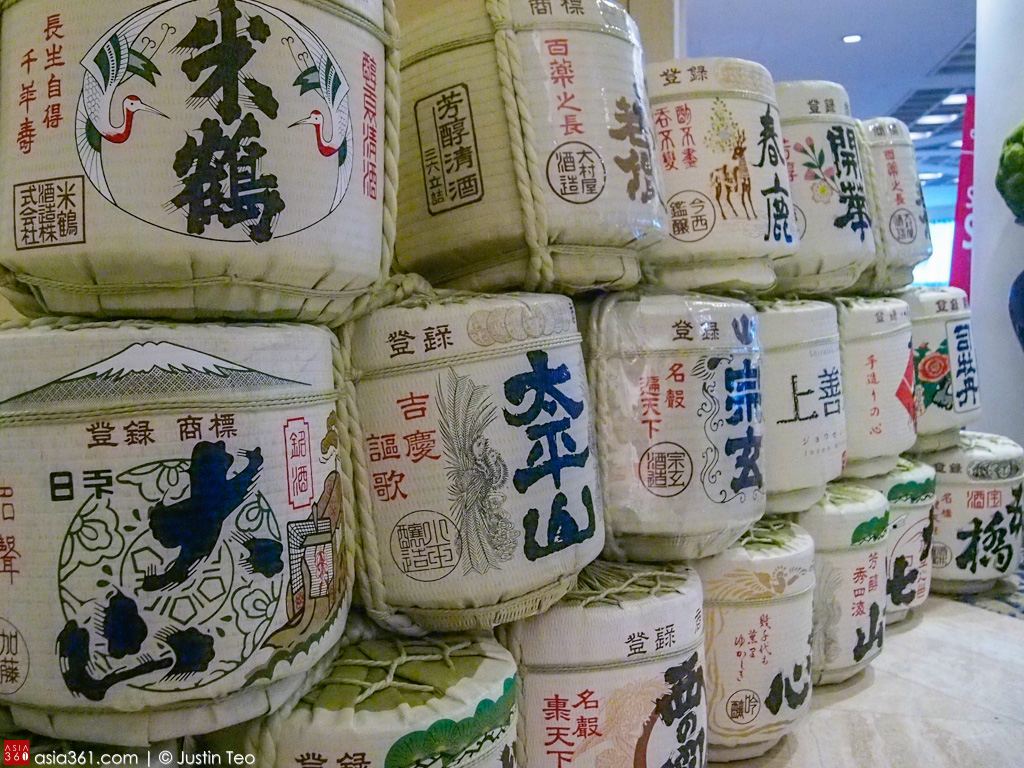 Saka-daru at the entrance of the Sake Appreciation Singapore 2016.

Organised by the Japan Prestige Sake Association and Tanesei Trading, the Sake Appreciate Singapore 2016 was held at the Stamford Ballroom in Fairmont Singapore with 20 breweries showing off 100 different labels of sake and other specialty liquors.  I was invited to the free-flow sake event on the evening of 28th October, the second edition in Singapore after four years, to round up my month of alcoholic debauchery this year. 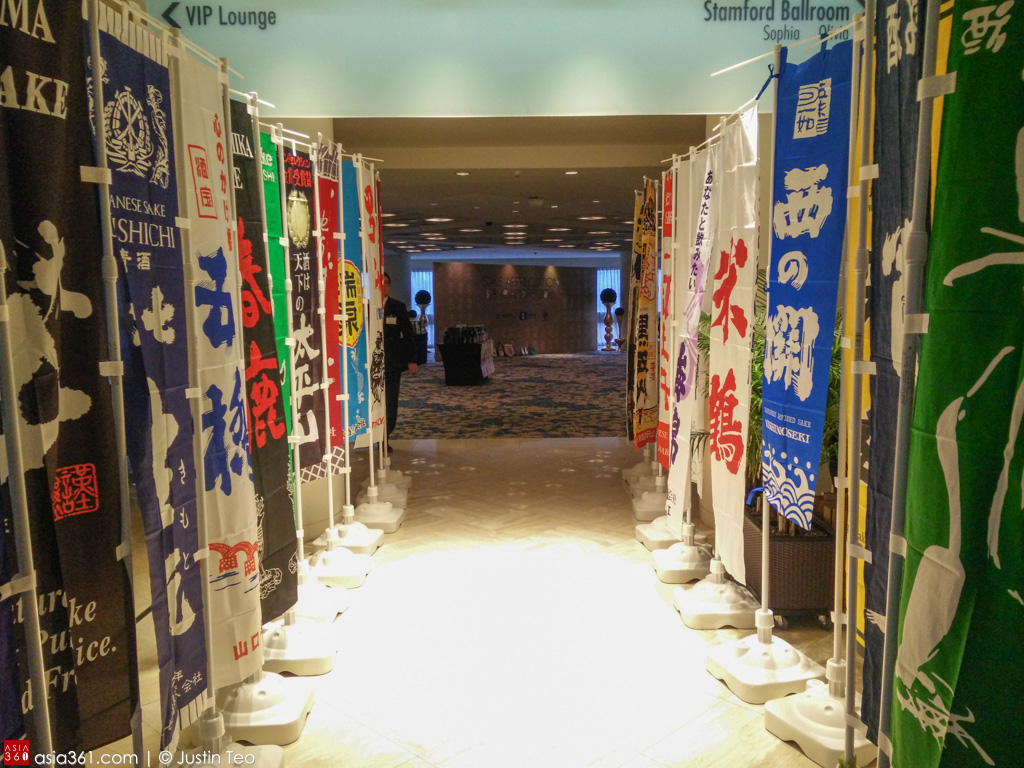 Flags of breweries flanking the walkway to the Sake Appreciation Singapore 2016.

I was handed a sake cup as I entered a walkway flanked by the flags of the breweries. I imagined another evening of rowdy jostling for the brewers to pour me a sample, like a few of my previous wine events earlier in the month.  These fears were soon alleviated when I saw how spacious the floor space was in relation to the booths; As the night wore on and more participants streamed into the ballroom, none of the booths were too busy to pour me a sample after a few seconds. 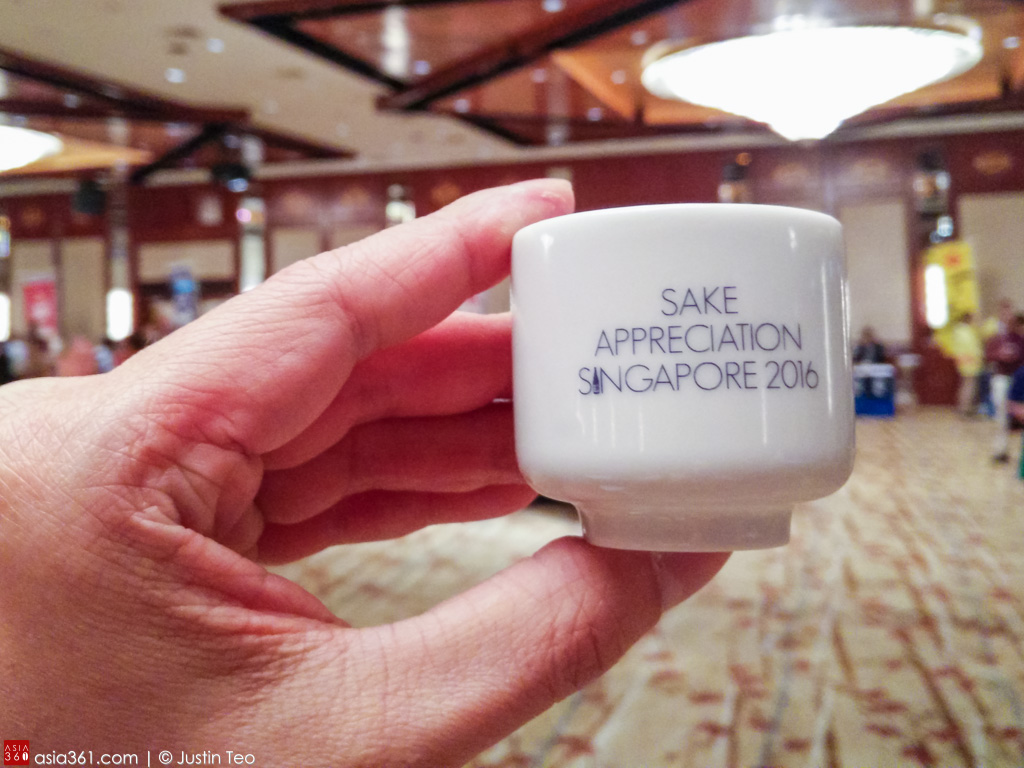 A tiny sake cup to sample the over 100 labels at the Sake Appreciation Singapore 2016.

I also loved how extraordinarily orderly the layout of the show was.  Three edges of the ballroom were lined with 20 coloured-coded brewers from south of Japan (Okinawa) to the north (Hokkaido) in a clock-wise manner. Each brewery showcased five different labels or products, which adds up to exactly 100 in the event booklet.  For the OCD in me, the Sake Appreciation Show was just awesomely tidy. 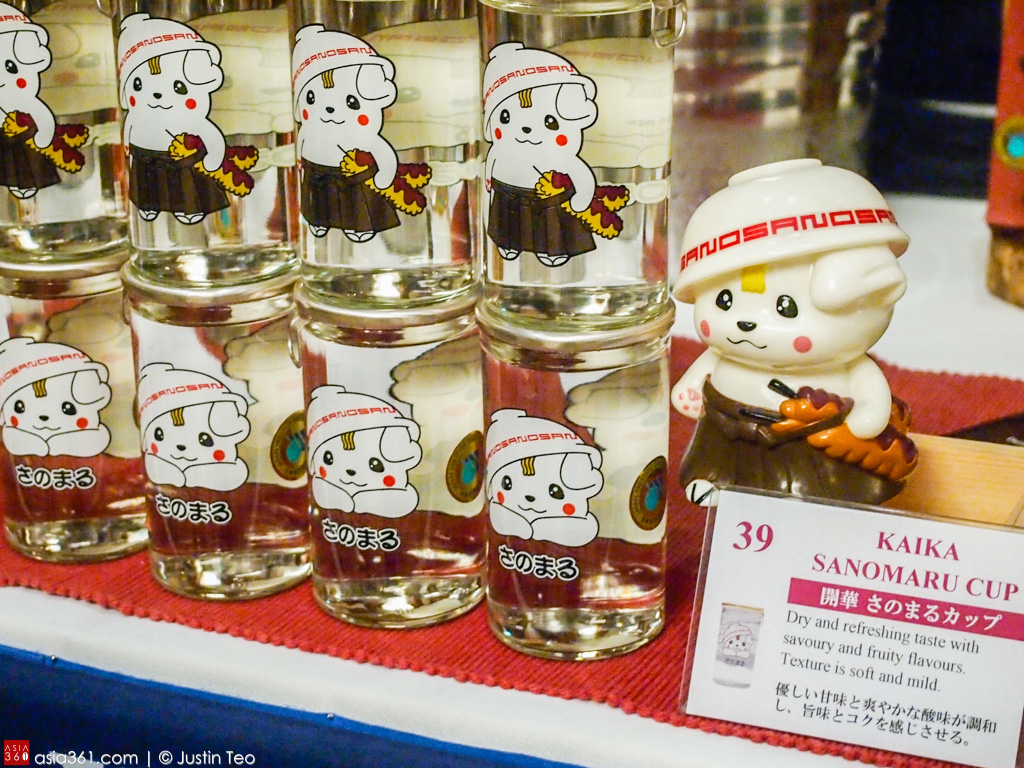 Not all sake presented were in serious looking bottles. This Kaika Tokubetsu Junmai Sanomaru Cup is in a friendly-looking package.

My strategy, given my hopelessly limited capacity for drinking, was to attempt all the premium junmai daijinjo offered by each booth, starting from Otokoyama brewery from Hokkaido and worked my way south to Zuisen brewery.  Sakes are classified broadly into three categories: Honjozo-shu, Ginjo-shu and Daijinjo-shu.  The main distinction is how much the rice used in the brewing process has been milled away.

In Honjozo-shu, the rice has at least 30% per cent of the outer grain milled away, contrasted with at least 50% per cent milled away in Daijinjo-shu. Junmai-sho simply means that it is pure rice wine, without distilled alcohol added.  Sakes brewed from the very centre of the rice kernel present richer and  more sophisticated flavours and textures than those brewed with more of the rice grain retained. 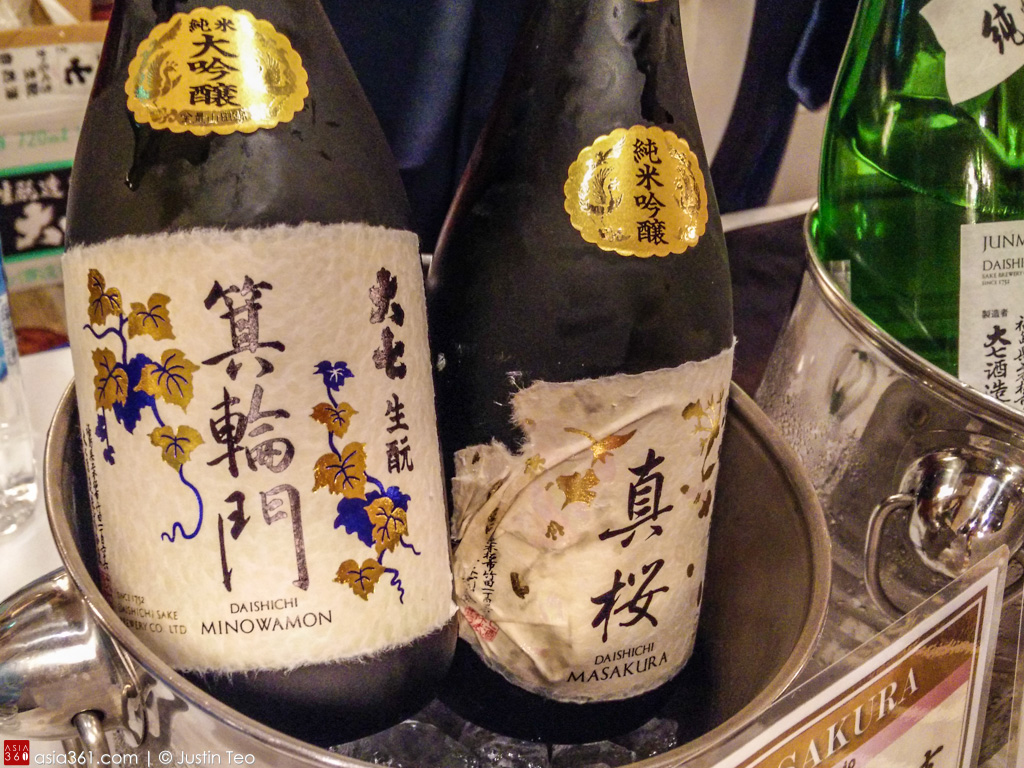 In Sake Appreciation Singapore 2016, the real highlights of the event were actually the autumn sakes, or Hiya-oroshi. Sake, which is typically pasteurized twice to fully deactivate the enzymes to prevent spoilage in the bottle, is only pasteurized once and aged for about six months year in hiya-oroshi before bottling.  Quantities for Hiya-oroshi sake are also more limited than regular releases. 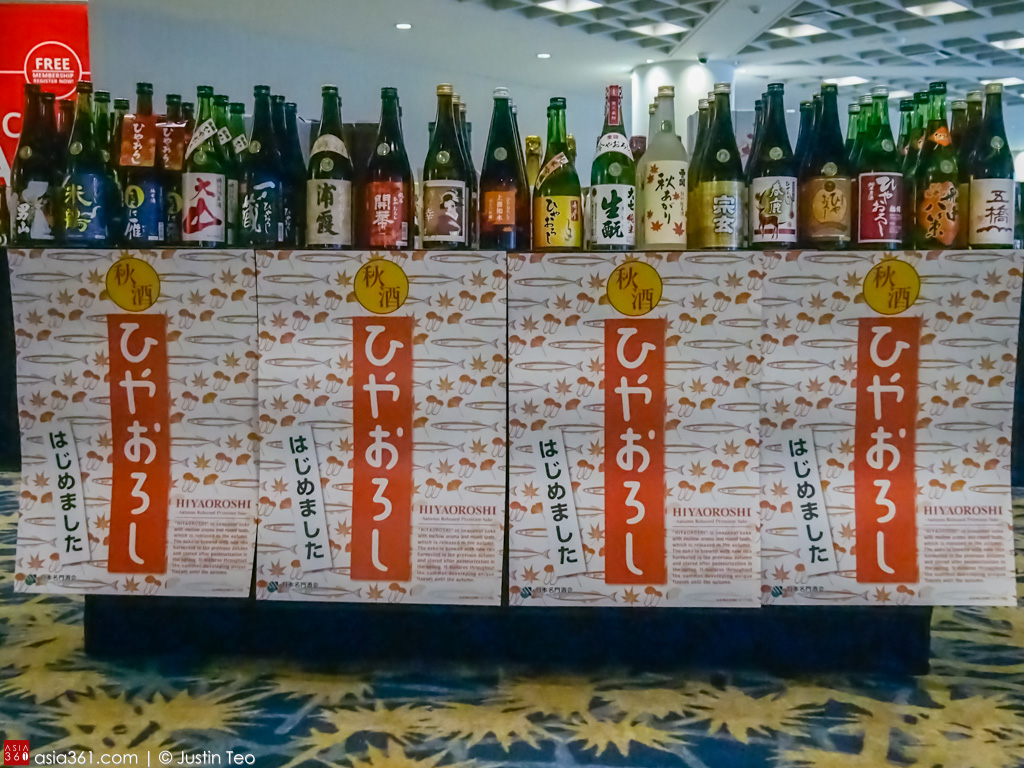 All the hiya-oroshi sakes on sale at the Sake Appreciation Singapore 2016.

In the rabbit warren of alcohols, where interlinking geographical, agricultural, and cultural influences the myriads of tastes and flavours of these sinful liquids, sake is no different.  As I learned that even within Japan, the climatic differences between the frigid Hokkaido and the balmy Okinawa causes the same sake to be tuned to the local food and habits; the north with its rich food required to fight the cold prefers a corresponding deeper and bolder flavours in the sakes, while the south tends towards a fresher and more subtle tastes in their sakes. 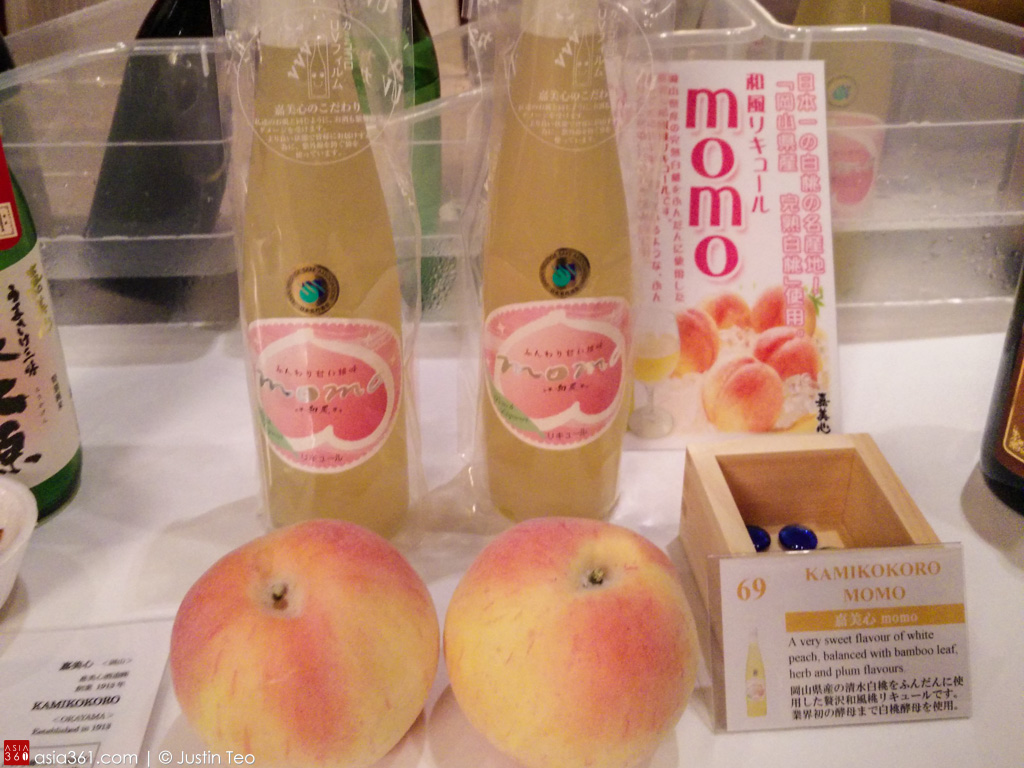 The Kamikokoro Momo sake would be popular with the ladies with its sweet white peach flavours.

My evening ended near the south, with the stronger sochu, made from sweet-potato by Satsuma Godai Brewery, and a new discovery of mine – Awamori by Zuisen in Okinawa.  Awamori could be classified as a type of Japanese sochu, although its storied history hints as a foreign influence which deserves a separate article.  Suffice to say, as a frequent whiskey-drinker myself, I very much have an affinity for the deep powerful aromas and flavours of awamori; I tried both the Zuisen Omoro, which is aged for ten years in traditional clay pots with 43% per cent alcohol, and Zuisen King, also aged for 10 years with 30% per cent alcohol, and both were fantastic ways to end a happy night of sake drinking.

The organiser had been generous with the venue, which also hosted a relatively excellent buffet dinner.  Retrospectively, the S$100 per ticket was good value considering the range and quality of the sake that was offered for free-flow tasting that evening.  The many different cups of premium junmai daijinjo that I tried the entire evening would have cost me significantly more had I tried them outside of a tasting event. 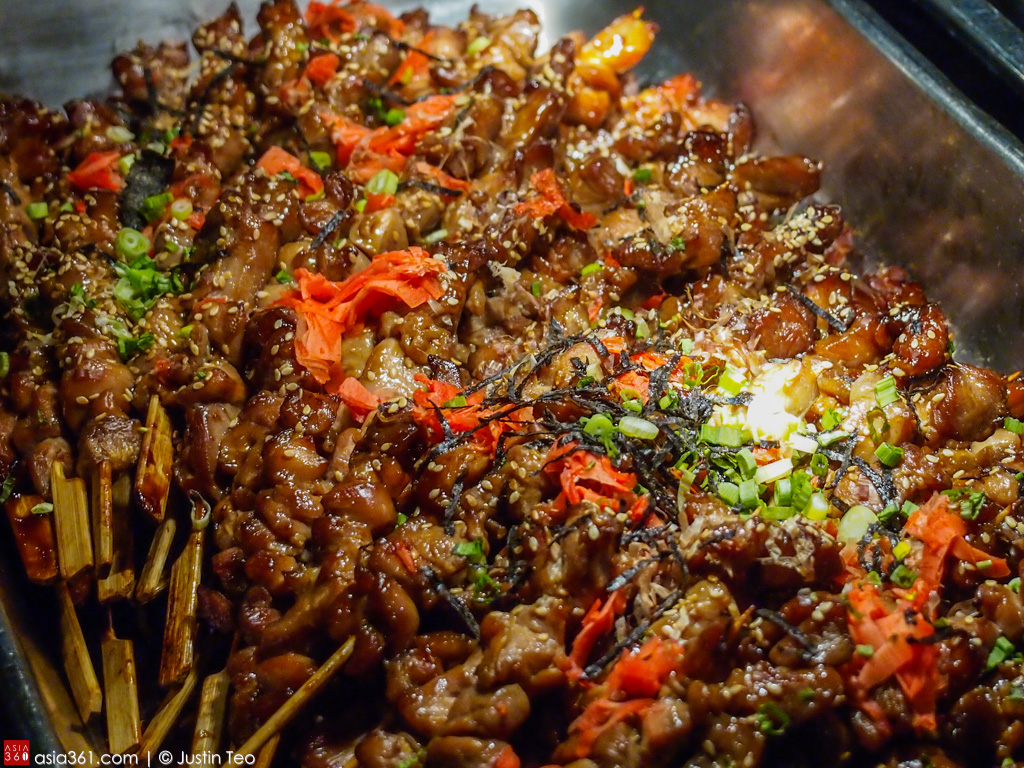 Yakitori at the Sake Appreciation Singapore 2016 at Fairmont Hotel. 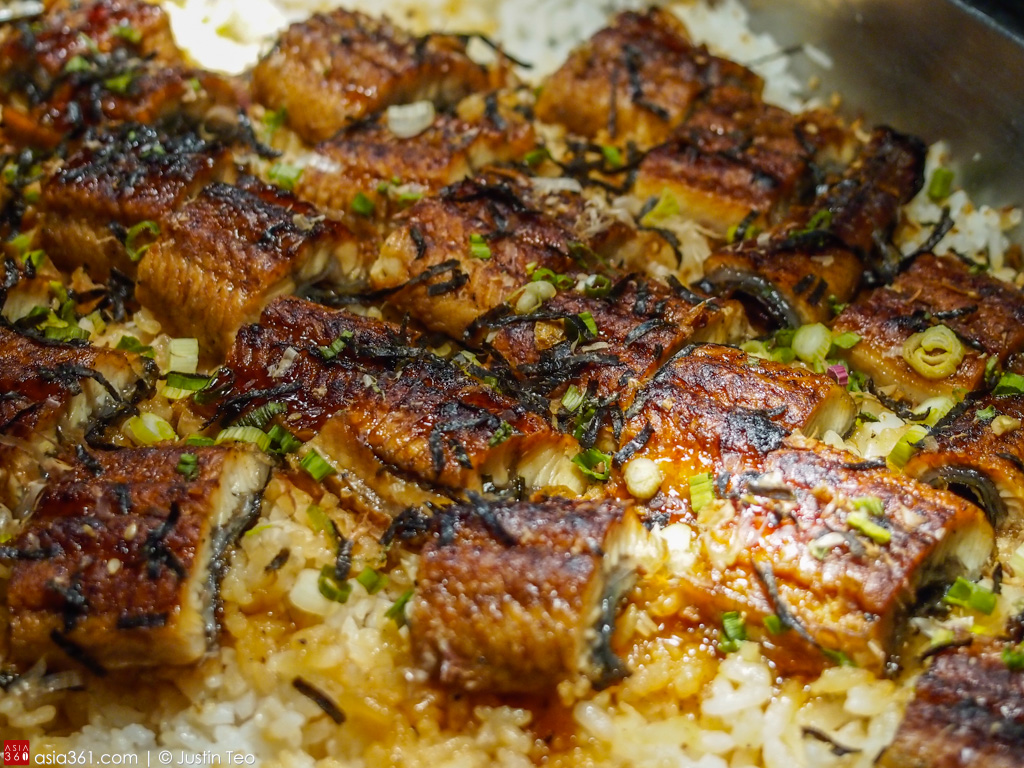 Unagi-don at the Sake Appreciation Singapore 2016.

In fact, this is perhaps the only event that I’ve managed to visit all the exhibiting booths, without forfeiting any because the exhibitors were too busy, or samples had ran out.  In addition, the cheese board and sushi buffet had impressed me, since food items are typically separate charges in wine tasting events, otherwise only canapés are provided.