What's On
You are at:Home»Eat & Drink»10 Things You Must Eat in Singapore If You Are a First-Time Visitor
By Jaslynn Yeo on October 19, 2016 Eat & Drink, Singapore

Strike a conversation about food with any Singaporean any day and you can be sure you’ll get them excited. It is of no surprise — with local hawker food like Hokkien Mee, Chicken Rice, Kaya Toast and Bak Kut Teh, eating is almost like a national past-time on this little red dot. If you are a first-time visitor to Singapore, you will be most likely spoilt for choice when it comes to deciding what to eat. Fret not though – we have helped you identify 10 of the most loved dishes in Singapore which will send you straight to culinary heaven: The chilli crab is among Singapore’s finest culinary inventions, and word has it that this local delicacy started out as a dish served from a pushcart ran by a couple in 1956. The couple experimented with different methods of cooking crabs other than just steaming it, and that was how this local delicacy was discovered.

The chili sauce is the star of this dish, and it is sweet, savoury and slightly spicy all in one. The sauce is made from a blend of tomatoes, chili paste and thickened with beaten eggs. The resulting flavour is extremely satisfying and will leave you wanting more. The chili crab is often paired with steamed or deep fried buns, also known as mantous, to soak up the sauce. This local dish is popular not only with the locals but also with tourists who come to Singapore specially to try this world famous dish. You can find chili crab in most seafood restaurants in Singapore. 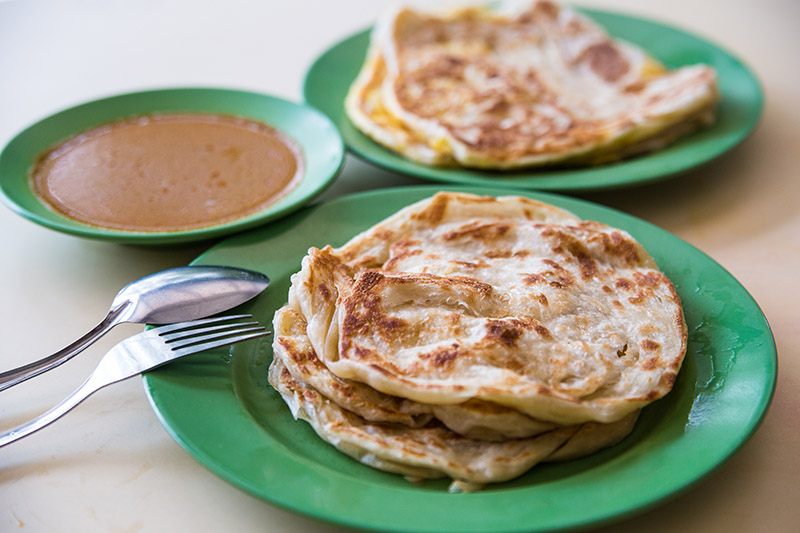 Roti means ‘bread’, and prata or paratha means ‘flat’ in Hindi language. Roti Prata is a South Indian flat bread made by frying stretched dough in ghee, and is usually served with fish or mutton curry.

The texture of the dough ranges from soft and chewy to super flaky, and while the traditional flavours are plain and egg. Local stalls now offer a wide variation of flavours ranging from chocolate, cheese, durian and even egg benedict prata! Roti prata stalls in Singapore usually open from early morning until late at night, so you can be sure to get a satisfying meal at any time of the day. 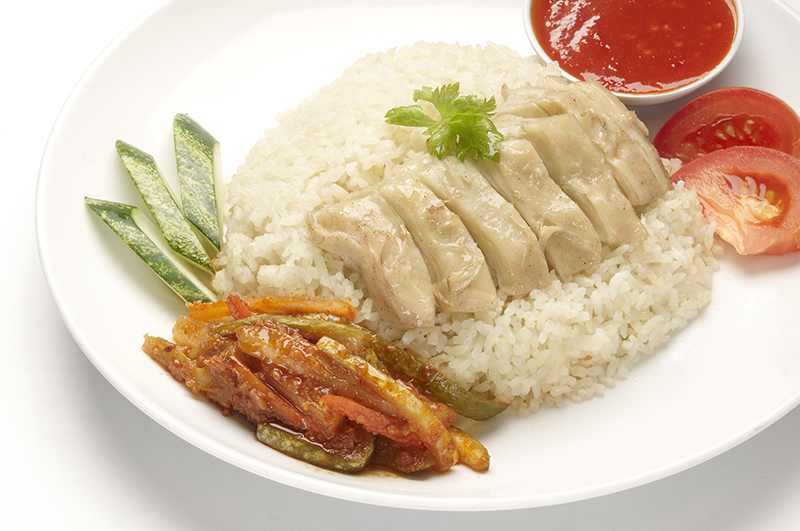 One of Singapore’s national dishes, officially or otherwise, is the Hainanese Chicken Rice. A ubiquitous sight at hawker centres across Singapore, this dish consists of bite-sized chicken pieces served with fragrant rice and a spicy chilli and ginger paste. One could boil, roast or braise the chicken in soya sauce for a different taste.

How do you tell if a plate of chicken rice is good? Well, by the rice and chilli, besides the chicken of course. The rice is cooked in chicken stock with ginger and pandan leaves, and the chilli sauce is made by blending garlic, ginger, lime juice and red chilli to bring out the tangy sour and spicy taste to complement the chicken and rice. A lot of work go into making this deceivingly simple dish. Little wonder it is the pride of many Singaporeans. 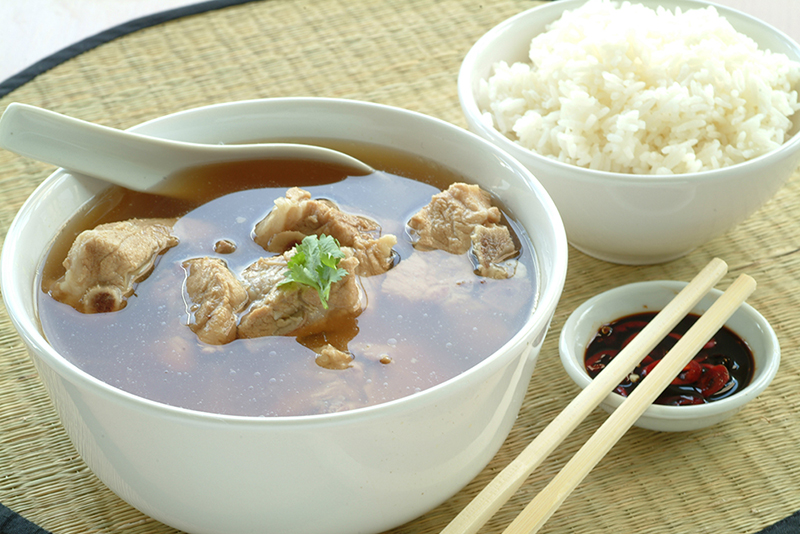 The name of the dish was derived because of the main ingredient, bak kut teh (in Hokkien), or also known as rou gu cha(肉骨茶), which translates literally to “meat bone tea”.

This popular Chinese dish in Singapore is believed to have originated from the Fujian province of China, and was introduced in Singapore by the Hokkien immigrants in the 19th century. Prok ribs are stewed in  a mixture of herbs and spices such as garlic, cloves, cinnamon, star anise, fennel seeds and coriander. You then eat the bak kut with a bowl of white rice. Don’t forget to savour the soup too. 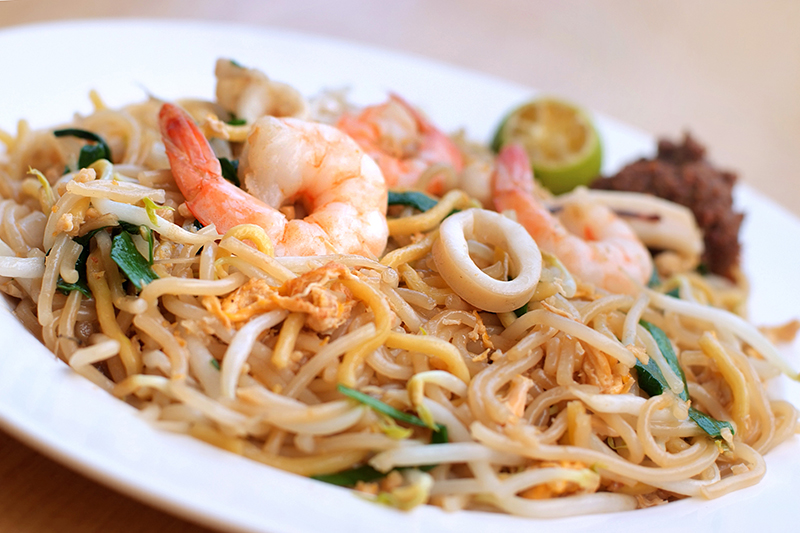 Known as Hokkien mee for short, this stir-fried noodle dish is cooked in an aromatic stock of pork bones and prawn heads. Comprising yellow noodles and vermicelli, the dish has juicy prawns, squid, pork belly, egg and crunchy pork lard to accompany it. While this combination of ingredients may seem weird to some, it is lip-smacking delicious. Finally, the dish will only be complete when it is served with a side of homemade sambal chilli and squeeze of lime juice on it for that added zing. 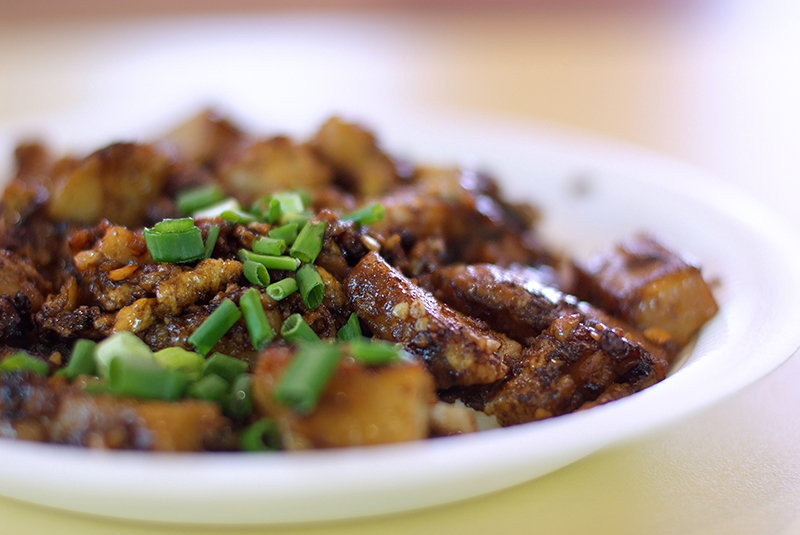 Do not mistake this dish with the western dessert carrot cake, which is a moist cake made with carrot and spices, covered with a cream cheese frosting.

The Singaporean version is savoury, and is made up mainly of rice flour, white radish and eggs. The rice flour and white radish mixture is steamed and cut into cubes before it is fried with garlic, eggs and preserved radish called ‘chai poh’. While it looks very normal and simple on the outside, do not be fooled by its appearance. The resulting texture is moist and fragrant, and is definitely comfort food to all Singaporeans. These days, it can be found in almost all hawker centres and has two different flavours: black (fried with sweet soya sauce) or white (original). Perfect for breakfast, tea or just as a snack to complement your cup of ‘kopi’ (coffee) or ‘teh’ (tea), this dish consists of charcoal-grilled or toasted bread slices served with homemade kaya, a traditional jam made from coconut and eggs, and a thick slab of butter in between.

The history of the dish is traced back to its Hainanese roots. Ya Kun, a coffee stall opened since 1944, and Kheng Hoe Heng, set up in 1919 were believed to be amongst the first few creators of this dish.

It is most commonly paired with two soft-boiled eggs with a dash of dark soya sauce and pepper, and a cup of locally made ‘kopi’ or ‘teh’. 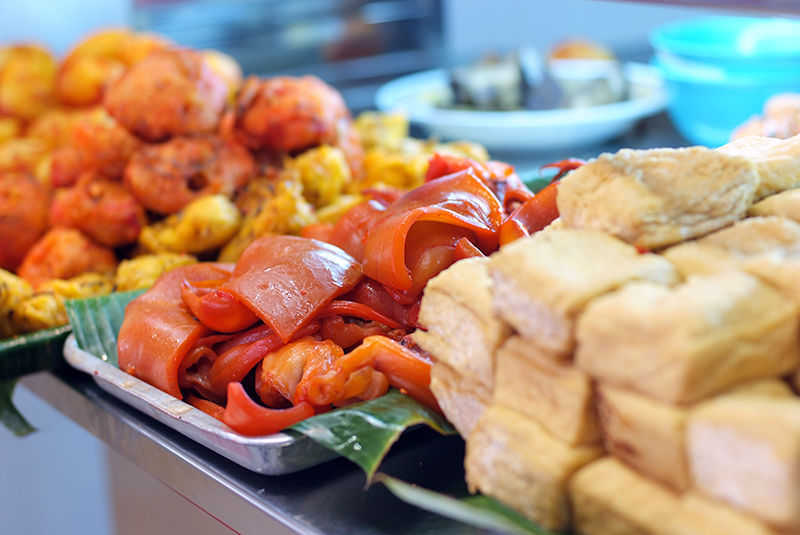 Rojak means an “eclectic mix” in colloquial Malay. The dish is typically made up of several different ingredients mixed together to complement each other. There are two types of rojak in Singapore, the Chinese and the Indian version. The Chinese version is otherwise known as “Wu Xiang”, and is normally savoury in taste. The Indian version however is the sweet counterpart of the two.

Indian rojak is made up of a mix of vegetables like radish, pineapples, grilled cuttlefish and dough fritters. They are then covered in a sticky black sweet sauce and garnished with chopped peanuts. The different ingredients and sweet sauce are worlds apart in taste, yet they complement each other perfectly, and a fragrant dish is produced as a result. 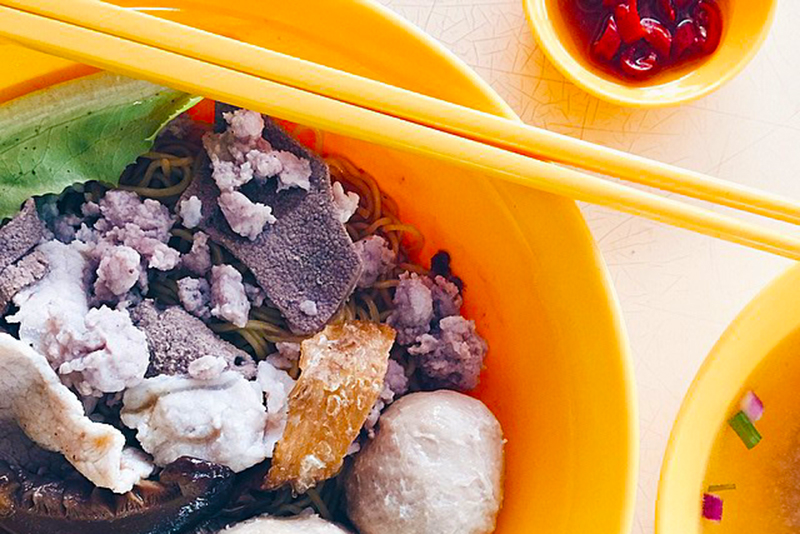 Mee pok is a noodle dish with a type of Chinese noodle characterised by its thick, yellow and flat appearance. There are two types of mee pok variations: fishball mee pok and mushroom minced meat mee pok (bak chor mee).

Mee pok can be served either as the soup or dry version. For the dry version, the mee pok is tossed in a sauce that consists of a balanced mix of chili, oil, vinegar and soy sauce. For children who may not be able to take spicy food, there is a tomato sauce version available. The noodle will be topped with ingredients such as minced meat, pork slices, pork liver, stewed sliced mushrooms, meat balls and deep fried lard. With so much goodness in one bowl, it is hard to say no to this local delicacy. 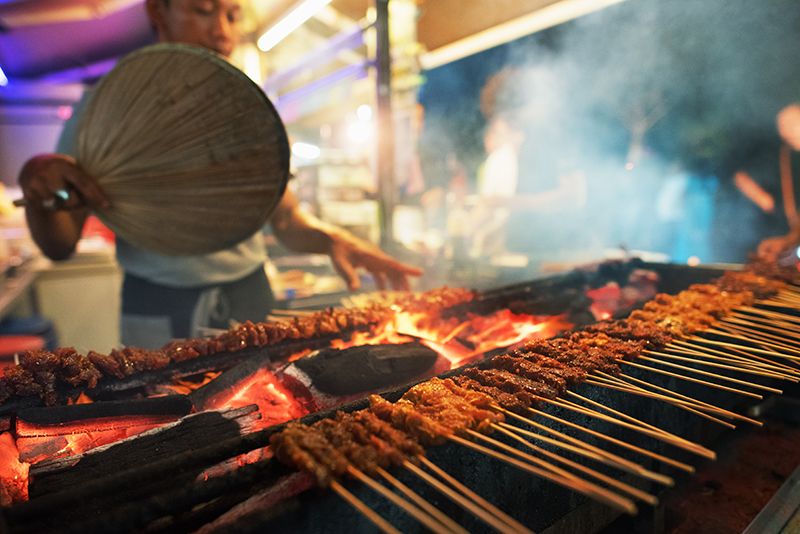 A dish of seasoned and skewered grilled meat served with a peanut sauce at the side, satay can consist of a variety of meats including chicken, goat, mutton and beef. The bite-sized pieces of meat are skewered on a stick and grilled over a wood or charcoal fire. When the meat is done, it is paired with a delectable peanut sauce made from ground roasted peanuts or peanut butter, coconut milk, soy sauce, tamarind, galangal, garlic, and spices. A popular accompanying side dish is the ketupat, which is a type of dumpling made from rice packed inside a diamond-shaped container of woven palm leaf pouch. Satay is commonly found in most hawker centres in Singapore, and the locals usually order it as a side dish to share in a group gathering.