I confess — I am a watch snob. While I am a geek who welcomes all things tech-related, I pride myself in wearing a wristwatch, despite knowing that my phone probably tells better time.  I may not own any of the luxury watches I lust after, but the watches I do have, I chose them for their classic look and timeless appeal.

When Motorola launched the first Moto 360 smartwatch in September 2014, it was among the first wearables to run Google’s Android Wear and the first smartwatch to retain a classic watch style.  The Moto 360 developed a following among Android users with its balance of sophisticated design, intelligent functions and price.

This time, local fans of the new Moto 360 did not have to wait as long as they did for the first-generation version. The second generation Moto 360 was launched in the United States in late 2015 and at about the same time in Singapore.  I finally got my hands on a review unit and here are my thoughts on using my first smartwatch. 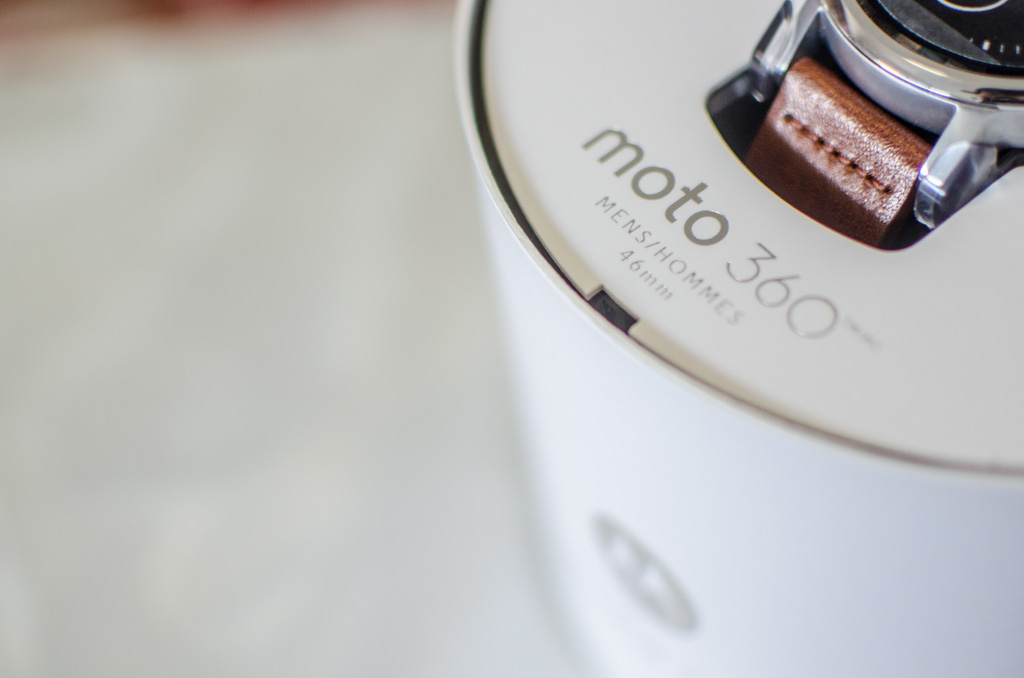 An even classier classic look

Motorola stuck with their winning formula, and kept the round watch face but made a couple of subtle changes to the physical appearance of the new Moto 360. The new watch now sports lugs for the straps.  The first-gen Moto 360 struck a clean minimalist look with its round stainless steel case, devoid of any protrusion other than the crown at the 3 o’clock position. For someone like me who has a preference for traditional watch designs, looking at the first-gen Moto 360 feels like I was looking at someone’s head that was missing ears.  The addition of the lugs on the second-gen Moto 360 completes the look for me. 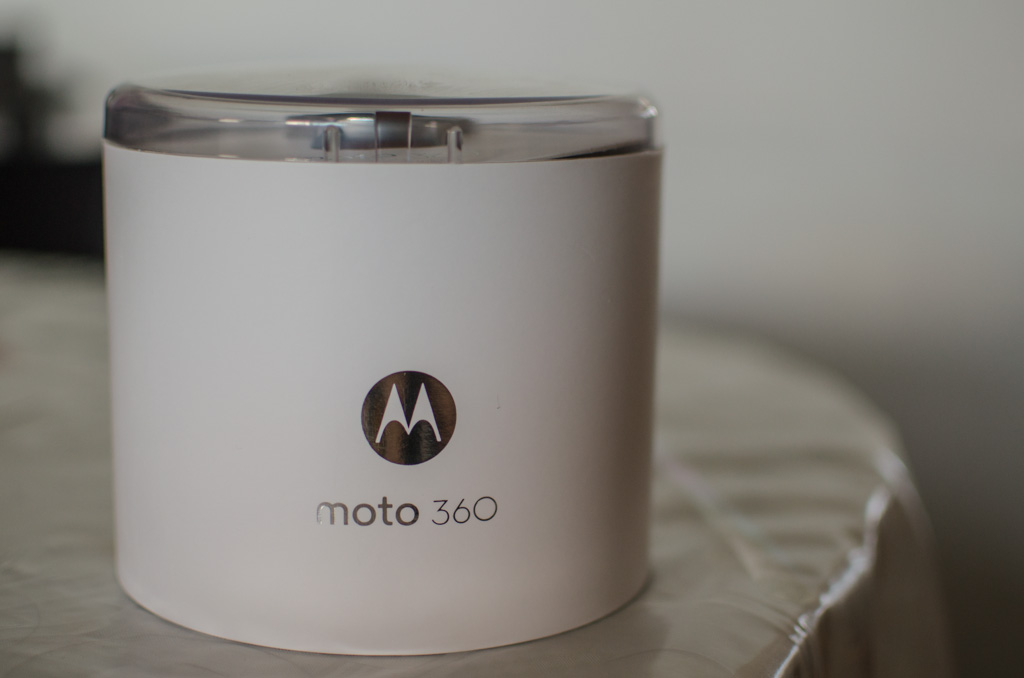 The packaging of the Moto 360 2nd Gen stresses the circular case design of the watch. Photo © Justin Teo.

The other change is the position of the crown, which has been moved to the 2 o’clock mark. This is actually a logical position for the function of the crown – which is used to wake the screen, put the screen to sleep, and acts like a home button for Android Wear. Watch crowns are traditionally used to wind a wristwatch, or to make adjustments to the date and time, and typically reside at the 3 o’clock position. 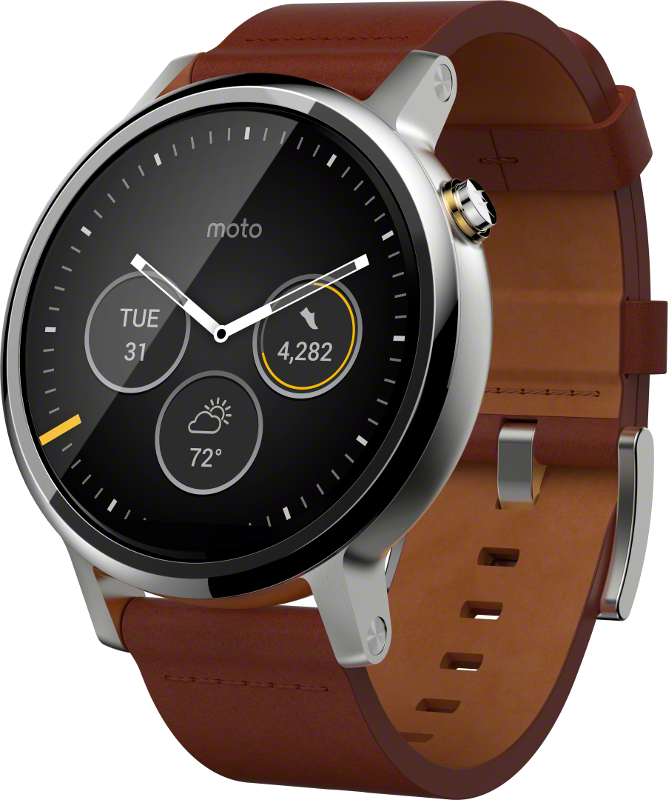 Subtle changes to the second-gen Moto 360 smartwatch — the lugs for the watch band, and the change of position for the crown. The 46mm Silver case with Cognac Leather band is S$549. Photo courtesy of Motorola Singapore.

Keeping the crown at its old position would have retained the classic look of a wristwatch, but having used the Moto 360 over three weeks, I think Motorola designers certainly heeded the feedback they received. Watch adjustments and spring winding require the user to twist the crown with the forefinger and thumb, and are not normally made with the watch on the wrist. The crown on the Moto 360 acts like a button, and is accessed frequently with the forefinger while the watch is on the wrist.  The new 2 o’clock position certainly feels a lot more ergonomic. 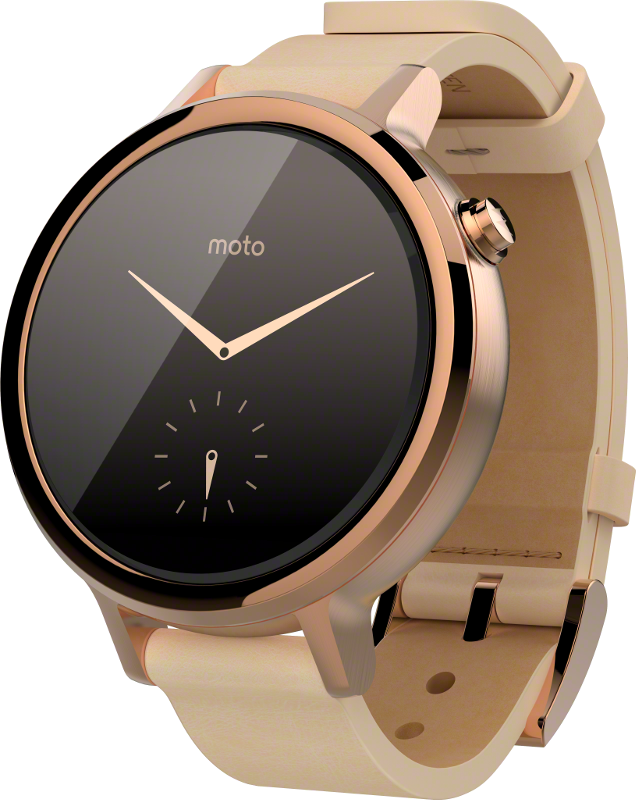 At the heart of the Moto 360, the Texas Instrument OMAP 3 on the older model has been swopped out with a more efficient Snapdragon 400 from Qualcomm on the second-gen. The most significant improvement is perhaps the uprated battery – 400 mAh in the 46mm version of the watch. Combined with the new chip, the 25% bigger battery gives the second-gen Moto 360 endurance to last more than 1.5 days without charging.  With moderate use and with the auto brightness turned on, I have been able to keep the watch ticking for about two days without charging. 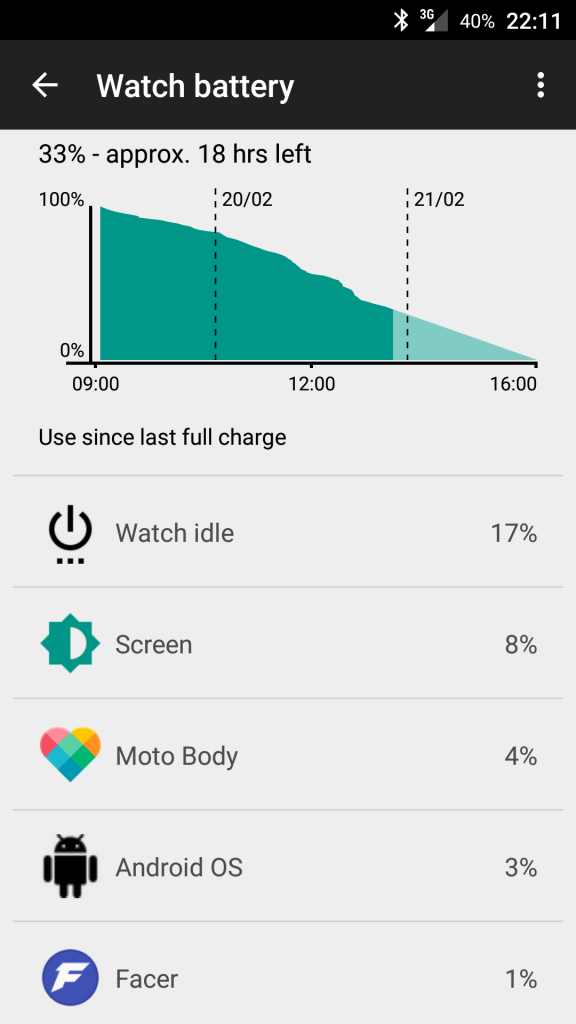 A screenshot from my phone reflecting battery life of the Moto 360 2nd Gen. © Justin Teo.

The watch suffered more than a few bangs against railing and door frames during my short time reviewing the watch, and I have yet to scratch the Gorilla Glass 3 screen. The edge-to-edge screen and the thin bezel maximise the viewing area, and give the screen on the Moto 360 the largest screen-to-case ratio of any smartwatch now. In addition, the resolution has been slightly upgraded from 205 pixels per inch to 233 pixels per inch.

The first thing I did when I got the Moto 360 was to enable the Smart Lock function on my phone since my Android phone does not have a fingerprint reader. Smart Lock, available on Android Lollipop or newer, allows me to bypass my phone’s lockscreen without keying my pin or password when I am using the phone with the Moto 360. All I have to do is register my Moto 360 as a Trusted Device, and keep it connected with my phone via Bluetooth. This way, I do not have to constantly key in my PIN or password to unlock my phone, and my personal data would be protected should I lose my phone. 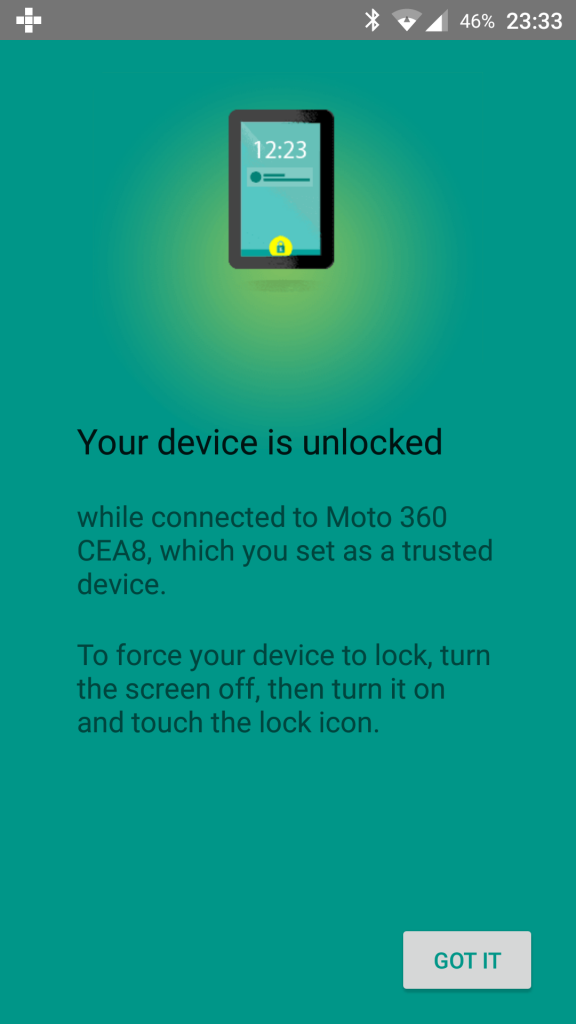 Enabling Smart Lock allows me to bypass my phone’s lockscreen when I have the Moto 360 on my wrist. © Justin Teo.

Second thing I did was to search for and download my favourite watch faces so that I can switch watch faces to match my mood and my outfits. There are loads of free watch faces to choose from, and even the nicer paid ones are quite affordable; it is certainly cheaper than buying a new watch. With the Facer app, you can even design your own watch faces. 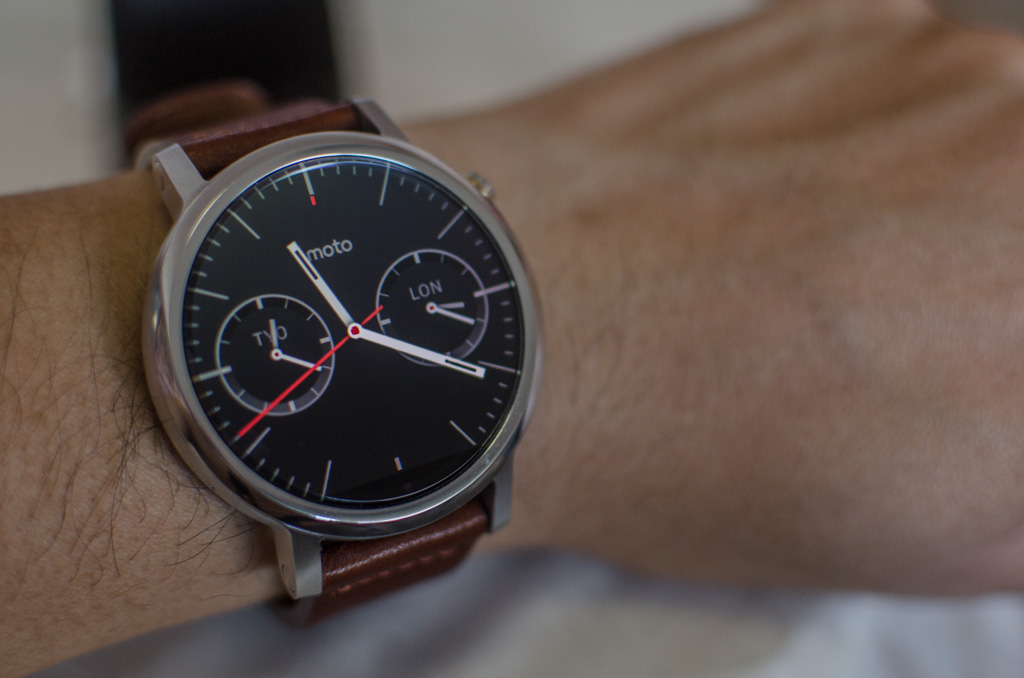 The 46mm Moto 360 with silver case and Cognac leather band on my hand. Looks just like a regular watch. Photo © Justin Teo.

Getting the haptic feedback on my wrist means I miss fewer calls and notifications. Missing calls and messages happen quite frequently when I am outdoors, in noisy environments or when my phone is put to silence.  The vibrations on the wrist are harder to miss, and do not disturb the people around you. 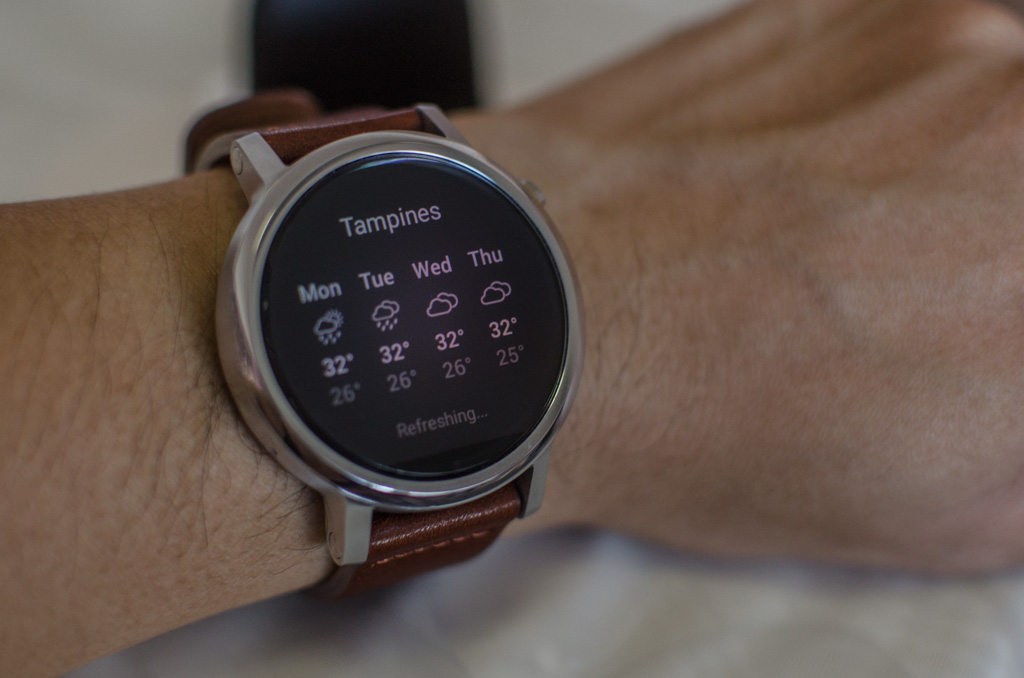 Getting the weather forecast on my second-gen Moto 360. Photo © Justin Teo.

The most impressive feature is how I am able to reply my phone SMS or Whatsapp messages using my voice. Speaking into the microphone on the watch when my hands are tied up, Google Now works relatively well in picking up my voice inputs for my replies, to call someone or check my appointment. They may not sound like much, but these nifty features and the intelligent integration with my phone definitely make wearing the smartwatch more than a fashion piece; Taking shortcuts on my wrist without having to dig out my phone for some of the tasks certainly “streamlined my mobile life”, echoing the tagline in Motorola’s marketing brochure. Simply drop the Moto 360 on the dock to charge it. It doubles up as a desktop clock while charging. Photo © Justin Teo.

Lastly, the Moto 360 also doubles up as a fitness band with its heart-rate monitor and pedometer functions.  It just seems that almost every other person is wearing a fitness band nowadays.  Using the Moto Body fitness tracker, which integrates with my Google Fit account, I can track my activity levels and fitness goals. 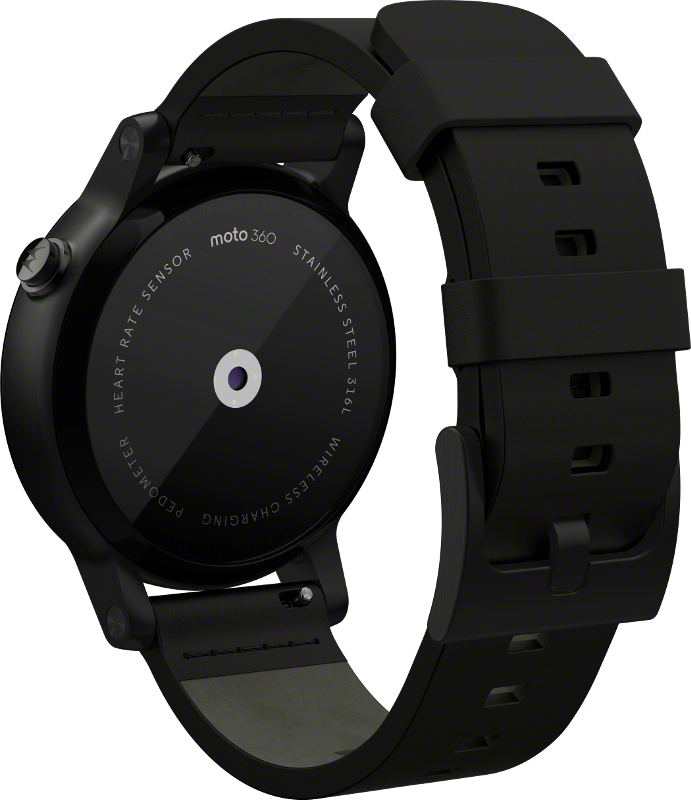 The optical heart-rate monitor on the rear of the Moto 360. This is the 42mm black case with black leather at S$479.

In partnership with Motorola, we’re giving away two Moto 360 smartwatches to two lucky readers. For a chance to win, simply follow the below steps:

Contest ends at 11.59 pm on 29 March 2016. The winner will be notified via Facebook, and must be able to collect the prize in Singapore. One winner will be chosen from Asia 361 and Alvinology each. Good luck!