What's On
You are at:Home»Lifestyle»Audi Driving Experience
By Mark Tan on August 7, 2015 Lifestyle, Luxury, Singapore

The Audi Driving Experience 2015 kicked off with a record-setting ‘Largest Test Drive Convoy’ in Singapore in June 2015. Over 10 days from 12 to 21 June, Audi put over 1,000 participants in Audi cars and let the participants experience first hand what it is like to drive their cars.

Audi also took the chance to showcase their brand new A6 and A7 family of cars. After a short briefing by Managing Director of Audi Singapore, Jeff Mannering, we were ushered into our respective cars and drove from the Audi Centre on Leng Kee Road to Changi Exhibition Centre. 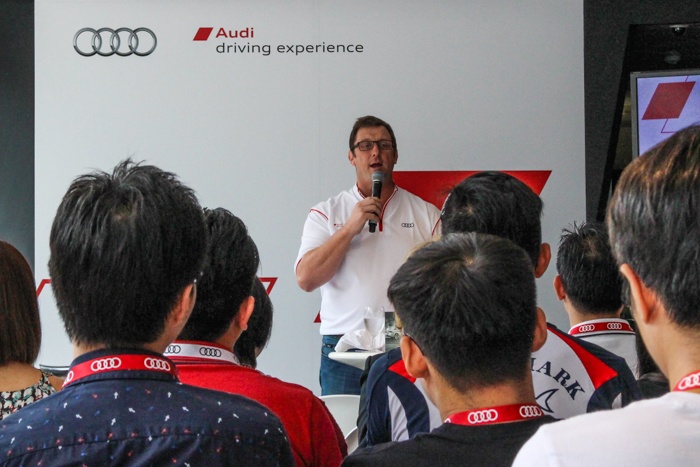 My ride was an Audi A7 Sportback 3.0 TFSI Quattro S-tronic (yes, it is quite a mouthful). My oh my, it was certainly one stylish car. The A7 Sportback combines the sportiness of a coupé with the comfort and practicality of sedan. Made of high-tech steel and aluminum, the A7’s low-slung looks and aggressive styling ensure that it grabs attention whether cruising along the highway or parked. The new A7 comes with Matrix LED headlights and Dynamic turn signals at the front and rear. When the indicator is pressed, the amber LED travels on a horizontal plane along the length of the signal instead of blinking. That was very cool and I was tempted to keep the hazard lights on just to watch it go.

As for the interior, the new A7 gets new materials including an aluminium/Beaufort walnut inlay and Valcona leather. The new trim materials are plush and add a luxurious feel to the interior of the car. I especially like the Beaufort walnut which adds a classy touch to the cabin instead of the usual highly polished faux-wood in some other marques. 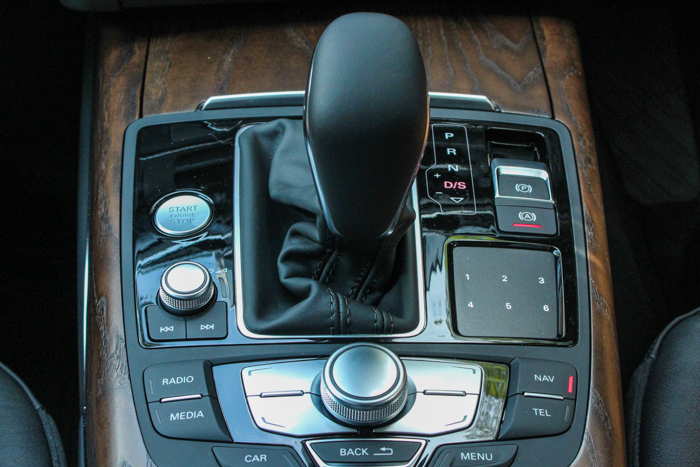 Audi’s new MMI navigation plus comes as a standard and boasts the latest generation of the infotainment system with Touchpad control. This lets the driver perform all infotainment and navigation functions including scroll and zoom with the Touchpad. I must admit it takes a little getting used to, especially for right-handers but it is a relatively gentle learning curve and there are buttons for every function if you’d rather use them.

The aluminum 3-litre V6 engine produces 245kW and 440Nm of torque from 2900 to 5300 rpm. There is plenty of power on tap for normal overtaking and yet very comfortable and agile for day-to-day city driving. For a car that is rather long at 4.97 metres, it is surprising agile, and feedback through the steering wheel is as would be expected in an Audi — excellent.

At Changi Exhibition Centre, there were a total of four stations – Slalom, Braking, Skid and Drift Control, and Acceleration. All stations were designed to give us a feel of the dynamic driving capabilities that Audis are renowned for. We were split into four groups with each group heading for a different station.

My first taste of the Audi Driving experience was on the Slalom course. We were paired into the brand-new Audi TT coupe and given free reign on a figure-8 course marked with cones. A quick safety briefing later and we were off! 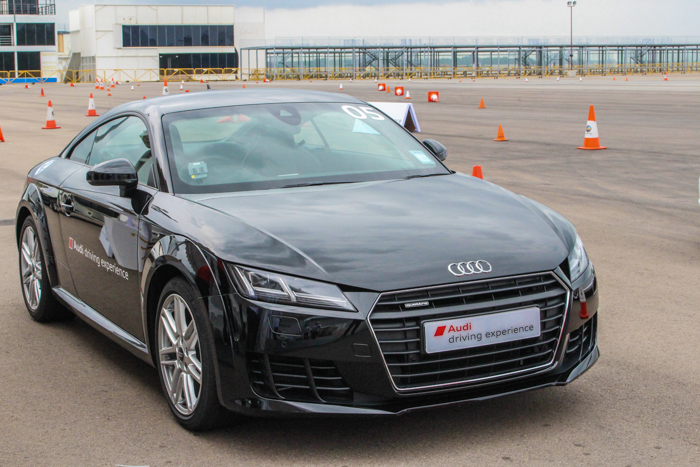 The new Audi TT is compact sports coupe with a 2-litre engine, taking it from 0-100km/h in 5.3s. Although not blisteringly fast, the coupe handles like a go-kart because of its compact size and the permanent Quattro all-wheel drive system. 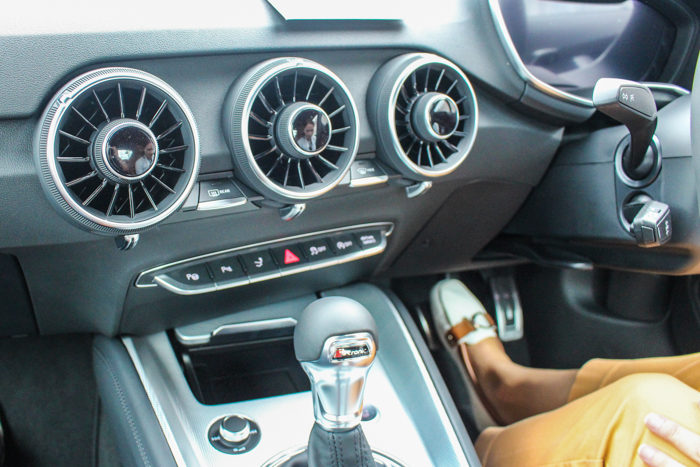 It was great fun putting the car through its paces on the short course. While we were all told to keep a safe distance from the car ahead of us, I bet secretly everyone was trying to get round the course the fastest. That being said, it is definitely more fun being the driver than the passenger. It was all I could do to keep my lunch down while hurtling round the course as a passenger. 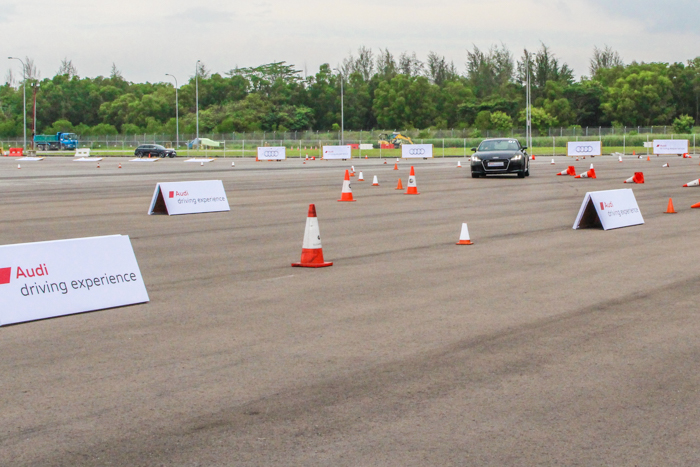 Next up was the Skid and Drift Control. I was praying that there would not be too much cornering and braking. Thankfully, this exercise was to showcase the brilliant state-of-the-art Quattro all-wheel drive system that Audi is famous for.

From a standstill, we were told to floor the pedal in our Audi A7 quattros and launch it onto a plastic sheet covered with soapy water. When I first heard the instruction, my immediate thought was: “I’m not going to be the first …”. Who knows how this car will react to an exercise obviously thought up by American daredevil Evel Knievel. I could not afford the S$300,000 if I were to crash the car. 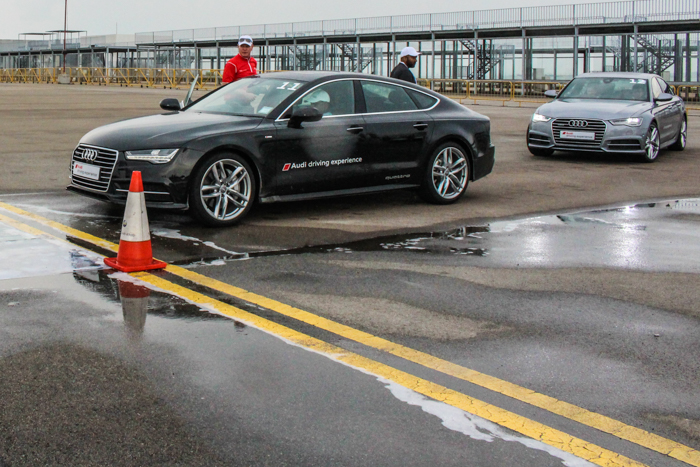 My fears, however, were unfounded. The permanent all-wheel drive worked a dream and after a couple of wheelspins on the slippery surface, the car gained traction and rolled smoothly off. All we had to do was to keep the steering wheel pointed roughly straight ahead and the car took care of the rest. Amazing!

Our next rotation was Braking and we were all excited about this because Jeff had promised two (!) Audis to the person who could break the brake pedal. We were told to floor the accelerator and depress the brake pedal as hard as we could when we came to a blue cone. After which, we were to choose the left or right fork demarcated by orange cones, without hitting the cones. Yeah, right. 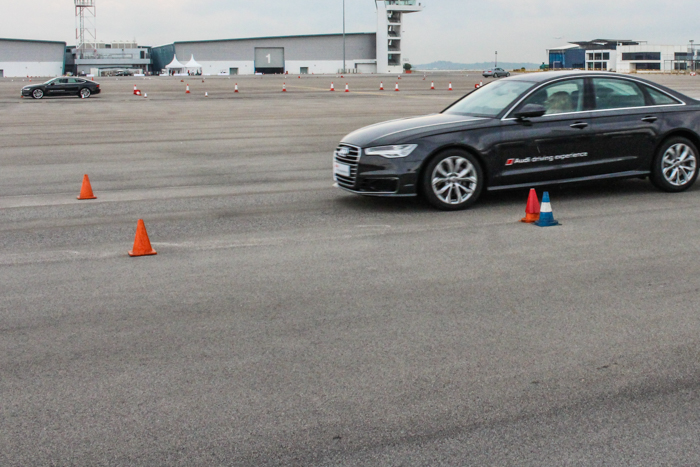 It is a testament to the engineering that has gone into an Audi that although we pretty much stood on the brakes of our A6 test car and brought it from about 100 to 0 km/h in roughly 30 feet, the car was still manoeuvrable. I honestly thought I was totally going to plough into those cones. 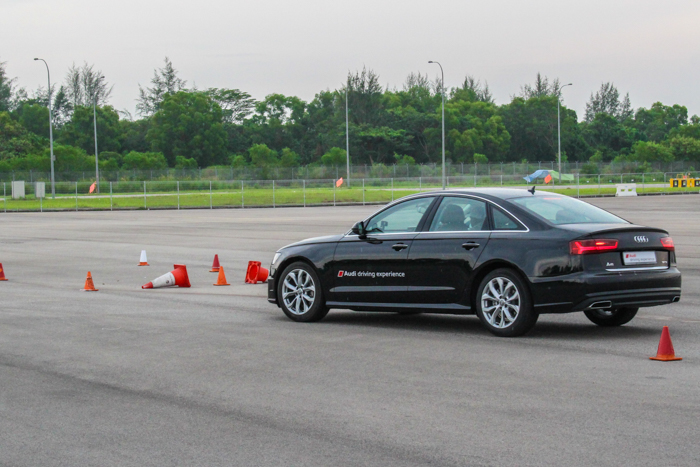 The most highly anticipated station (for me at least) was the Acceleration station. While at the various stations, I could see participants casting glances at the far corner of the course where some very exciting, high-pitched engine screams were emanating.

There were a total of three cars at this station: an Audi R8 4.2 V8 Spyder, an RS6 Avant 4.0 TFSI quattro and a race prepped Audi S3. We were instructed at flag-off to floor the accelerator and hit the brakes only when our accompanying safety instructor told us to. 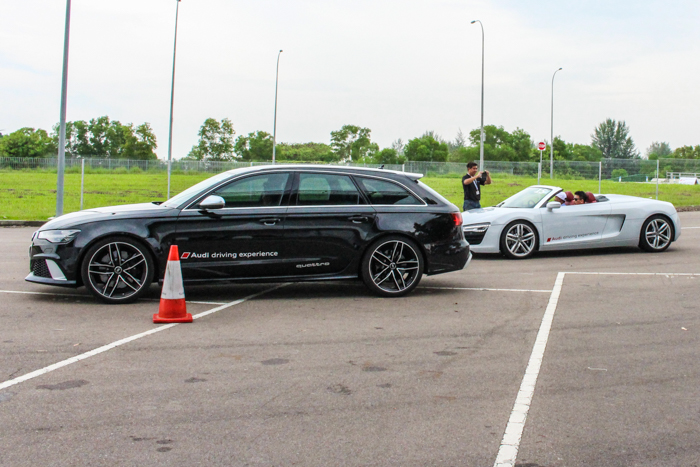 The S3 was a left-hand drive model so we had to be taken in it by a professional. The S3 was stripped down to make it lighter and it was immensely loud. There was no sound dampening material and no rear seats, but it was fast! We hit the turnaround point in no time and the driver told me the other two cars were faster although the S3 was the loudest. I could not wait. 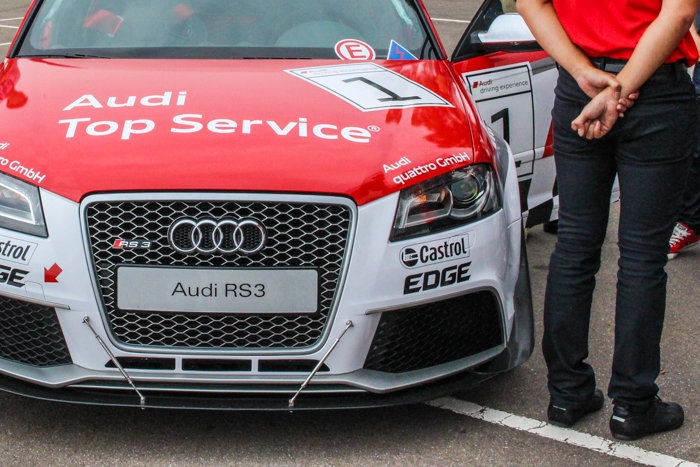 I took the wheels of the R8 Spyder next and I totally felt like Tony Stark driving the car with the top down. I was raring to go.

The safety instructor reieterated that I was not to press the brakes until he told me too. No need to tell me twice, Mister; I may not hit the brakes at all … the 1 km straight blew by in the blink of an eye! The R8 Spyder was an extremely quick car and the fact that we had no roof made the experience even more raw and engaging. 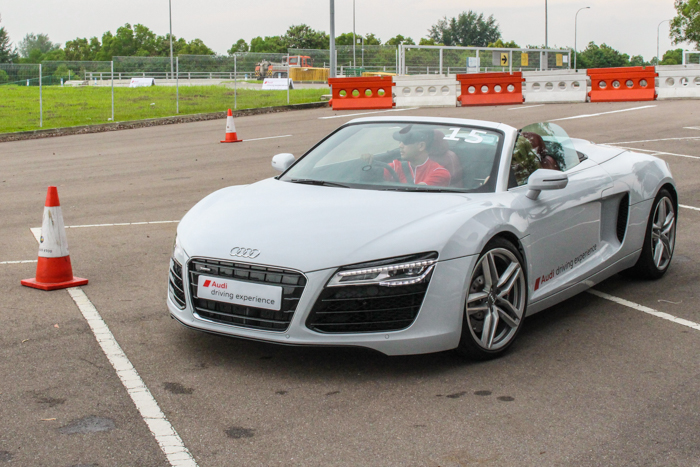 Last but not least, it was time to drive the mighty RS6. The instructor in the R8 had earlier told me the RS6 was the faster car. I was skeptical. A station wagon is faster?

I had to eat my words; in fact, I gobbled up my words straight in no time. I kept thinking to myself why hasn’t the instructor given me the ‘Ok’ yet. We’re running out of road, we’re gonna die … Finally, the instructor said “Ok!” and I pushed the brakes and the car slowed down. It was so exhilarating I wanted to go for another round, but we had run out of time (and fuel perhaps).

At the end of the day, I drove back to Leng Kee in the same Audi A7 3.0 I came in. This time I could enjoy the drive back instead of trying to take everything in – no more questions, no more photos. Just me and the sublime drive that Audi has engineered.

Foodie. Drinker. Dreamer. Superhero-wannabe. Mark is also a lover of travel and wants to put his fledging knowledge of photography for the greater good of mankind. Meanwhile, he is crossing his fingers for the time machine to be invented before his time on Earth is up.