Nestled in an oasis of green along Scotts Road is Scotts 27, a beautiful heritage building that houses a French restaurant helm by a husband-and-wife team, Julien Bompard and Edith Lai-Bompard.  I was invited to Scotts 27 on 7 May, not for the French cuisine Chef Bompard is renowned for, but for a gastronomical experience of another kind – single-malt whiskies. 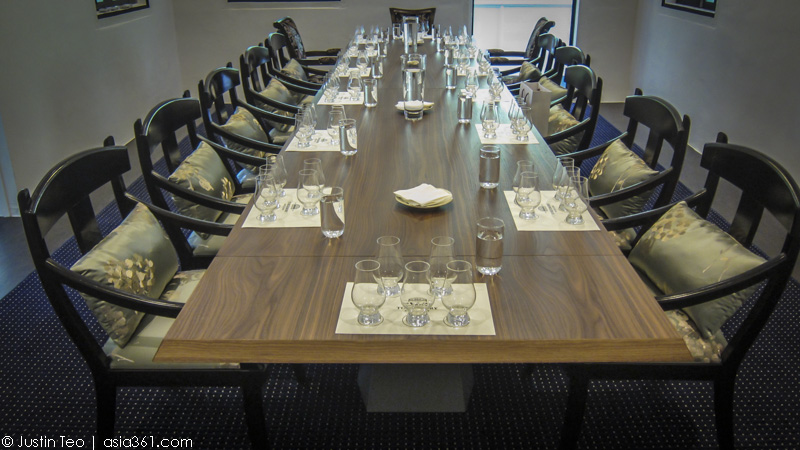 Getting ready for single malts

As the whiskies glistened tantalisingly in front of me, their combined aromas mixing and wafting together, I could barely contain my excitement.  It was my first proper tasting session for single-malts, with a whisky master and using Glencairn tasting glasses.  However, before we got to the tasting, Ian Macmillan, the master distiller and blender, began with an introduction of the Tobermory Distillery, which is one of Burn Stewart’s stable of distilleries. 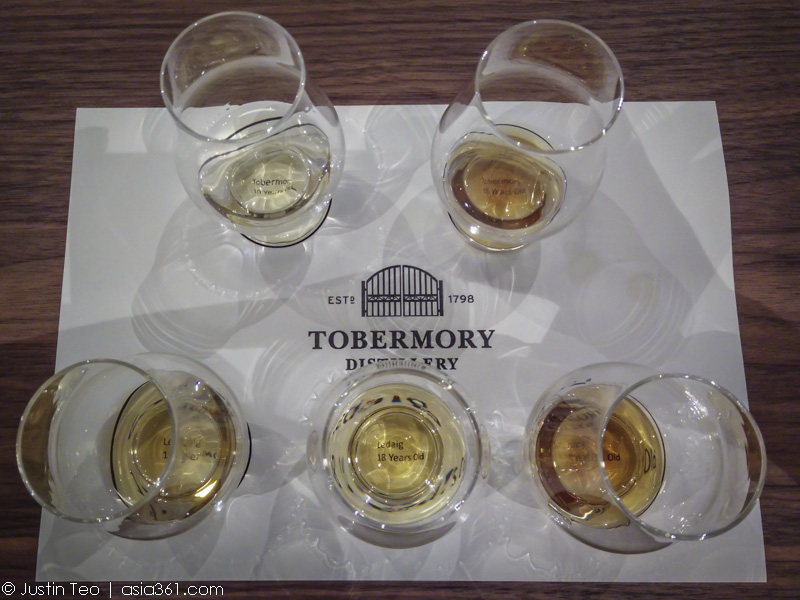 The distillery is located on the Isle of Mull, an island off the west coast of Scotland and north of the Isle of Islay.  Tobermory was among the first commercial distilleries on Scotland, although it suffered long periods of closures and neglect like many other distilleries in Scotland, before it came into Burn Stewart Distilleries’ possession in 1993. Ian was then tasked with overhauling the whiskies that Tobermory makes, and it was only in recent years that the fruits of Ian’s hard work are finally emerging in the market.

Ian stressed that the range of Tobermory whiskies we were tasting, were non-chill filtered and uncoloured, unlike some of the single-malts in the market today.  He explained that although chill filtration clarifies the end product, making it look good, the process removes many of the wonderful flavours and characters from whiskies that took decades to form in the maturation barrels.  Ian also said it is a good sign if the whisky turns hazy when some water is added to it, or when it has sat in the glass for a little while.  It is an indication the whisky it is non-chill filtered and retains full flavours from the maturation. 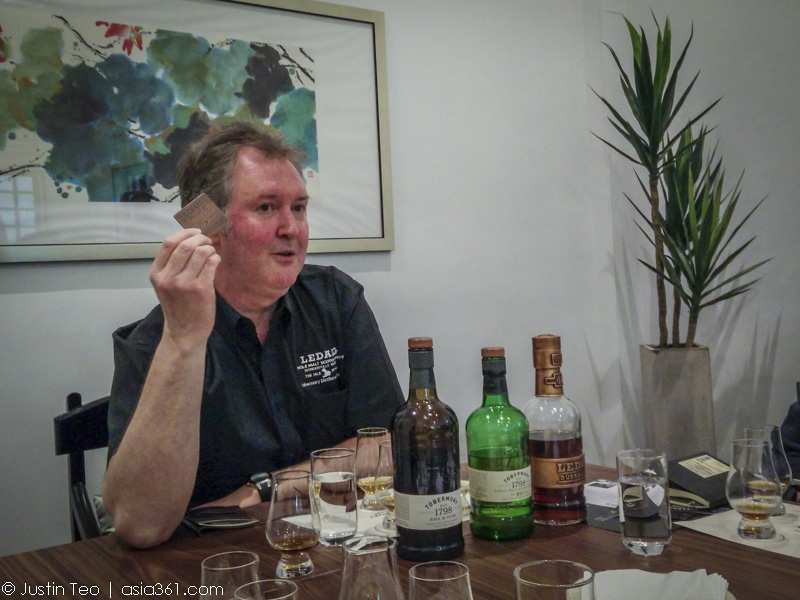 Ian Macmillan, the master distiller and blender, gives an introduction of the Tobermory Distillery, which is one of Burn Stewart’s stable of distilleries.

I could feel Ian’s love for his whiskies as he spoke passionately about how he still insists on the traditional methods of distilling. He described the absence of people in other distilleries, where machineries and computers have replaced human workers, losing some of the human touch and mystics of Scotch single-malts in the process.

Finally, to the tasting! I began with the Tobermory 10 year-old and 15 year-old. Both of the Tobermory whiskies were excellent, with good depth and complexities. The 10 year-old smelled of grass and butter, with a hint of fruit jams on the nose.  The medium bodied 15 year-old was my personal favourite of the day. I do not usually like sherried whiskies, but the 15 year-old was chocolatey and had the right balance of sherry, smoke and spice on the palate which I enjoyed very much. 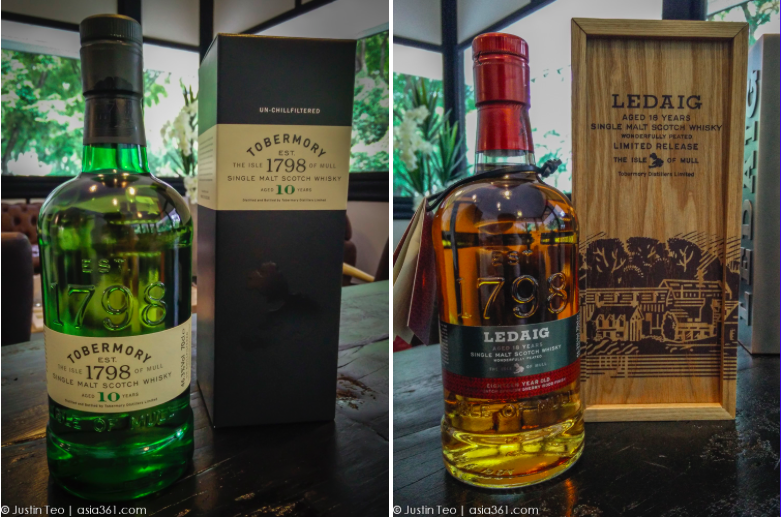 The Ledaig range, pronounced “led-chig” in Gaelic, is the peated expressions of Tobermory whiskies.  The 10 year-old and the newly available 18 year-old were available for the tasting.  Both Ledaig single-malts reminded me of Lagavulin, one of my favourites, as both use the same malted barley. The 10 year-old has robust smokiness on the nose, with an all-round complexity that contains candy and vanilla on the palate. Like the 15 year-old Tobermory, the 18 year-old Ledaig was finished off in Spanish sherry casks, giving it sherry notes in additional to the smoky peated and medicinal complexities.

Highlight of the Day: Ledaig 42 year-old

Last but certainly not least, I moved on to the 42 year-old Ledaig.  This whisky spent the last 14 years of its 42 years of maturation in Sherry casks, giving it a deep luxurious chestnut colour.  The most striking thing, as Ian pointed out, is how much smokiness the 42 year-old still retains.  Ian explained that whiskies tend to lose their smokiness as they age, with six to 10 year-olds reaching peak smokiness, and gradually tapering off after that.  Hence, for the Ledaig to retain so much smokiness even after 40 years in the barrel, there has to be some magic in the original distilling. 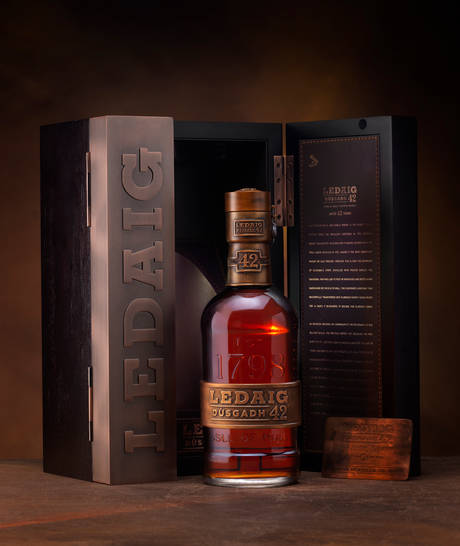 Personally, I was rather confused and surprised at how drinkable the Ledaig 42 year-old was.  I had read previously that single malts older than 25 years are more pleasant when water is added, without getting a mouthful of “splinters” or “sawdust”.  Ian cheekily stated that the only thing anyone should add to the Ledaig 42, was “more”. I definitely agreed with him.

The Ledaig 42 year-old is a magnificent and intriguing whisky, with smoke and sherry on the nose; its profile kept changing during the tasting.  As the tasting notes suggested, it has “massive complex layers of dark chocolate, coffee and cherry liquors. Extremely smooth, well-balanced with spicy ginger and black peppercorn overtones.”

One thing outstanding in the Tobermory whiskies, including the younger espressions, was that they all had excellent and long finishes, with the Ledaig 42 being especially outstanding.  In fact, I could still detect the hints of the whisky hours after the tasting! 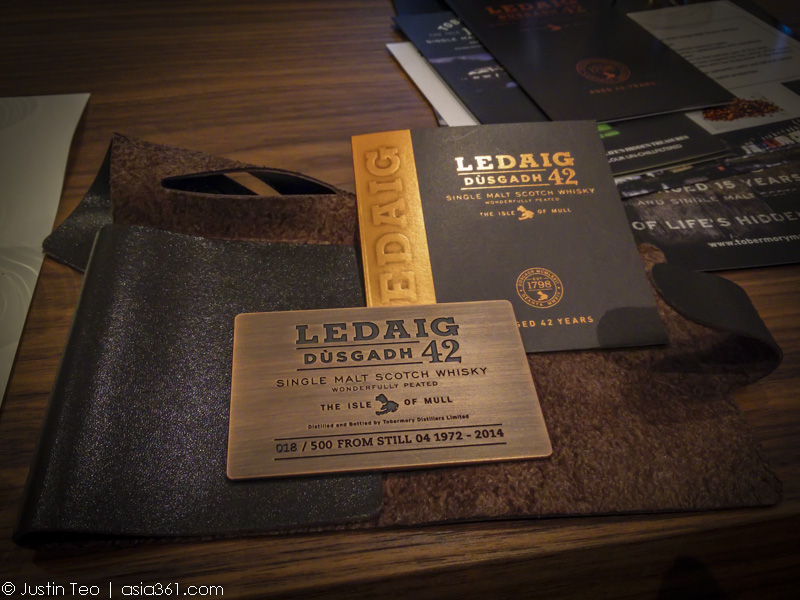 Copper momento to redeem a bottle of Ledaig 10 year-old in 2024!