What's On
You are at:Home»Countries»Thailand»The Wild West of South Thailand
By Goh Guo-Hua on March 30, 2015 Thailand, Travel

If the classic Spaghetti Western were filmed for a Thai audience, Soi Cowboy would be located in the many one-street villages in Narathiwat province — a province that is infamous for what goes on in the twilight hours for other things that go boom boom. 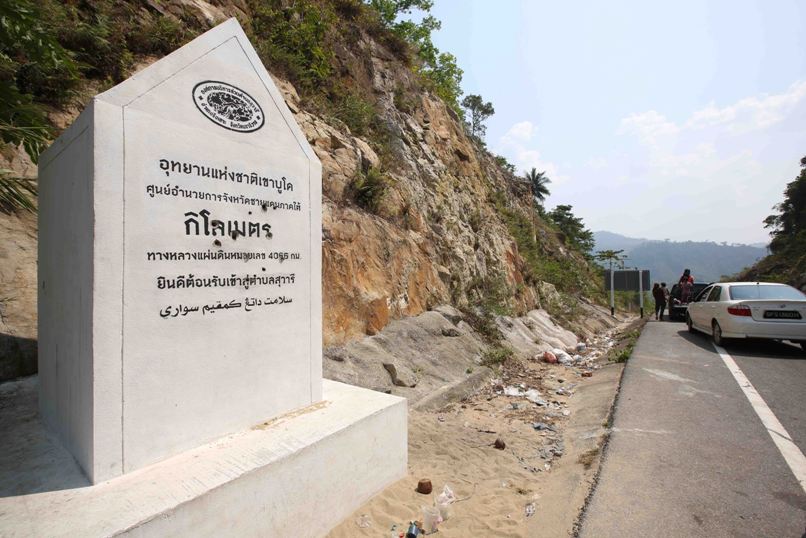 Narathiwat is situated at the southernmost corner of Thailand, a region embroiled in a long running separatist movement. Tensions, often described in periodicals as “simmering”, flare up every few days in the form of improvised explosive devices, shootings and machete attacks. The roads themselves showed signs of bullet holes in the distance markers.

I pulled up at a collection of weathered half-wooden houses, below the railway embankment, where the train tracks cut across the highway. The evening before, I had passed by the same village and noticed a playground of considerable size, abuzz with children clamoring all over the metal structures with attentive mothers watching close by. I added up these and other factors like cleanliness and obvious signs of home pride to arrive at the decision that this would be a safe place to visit unannounced. 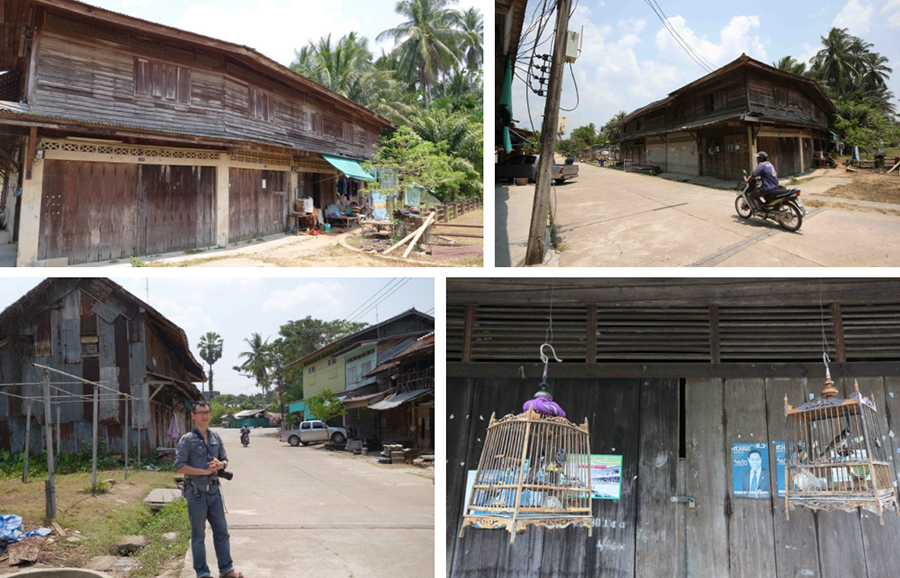 As I strolled down the main street, Ennio Morricone’s signature theme song to “The Good, the Bad, the Ugly” played in my mind. There was a group of men sitting at the verandah of the second house. Their attention to their prior engagements was broken as I started walking down from the edge of town. From the corner of my eye, I could sense curious faces emerging from the shadows of the interior to peer at the new kid in town. Window shutters were pushed open while others were hastily closed like the leaves of the mimosa plant when disturbed.

The occupied buildings were concentrated on the left side of the street. On the right, there was a heap of semi-burnt and fresh bags of putrid cast-offs in what seemed like a trash management area. The jungle grew more wildly here and was making intrusions at various chinks in the redoubts of urban development. A stilted house still stood proudly, indignant at being abandoned, but in contrast, its decrepit neighbour seemingly suffered from prolonged neglect with its roof bowed down over in sorrow. 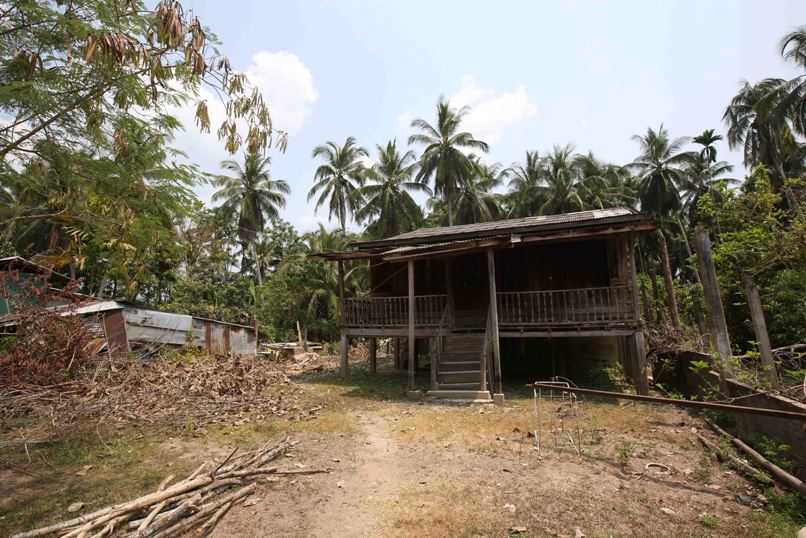 “Selamat Siang,” I called out an afternoon greeting in Malay to a man sitting with a toddler, in front of the fourth house.

“Sama, Sama,” the man replied, wishing the same to me. Narathiwat is quite unlike most Thai provinces; it has a Muslim majority and most speak Patani Malay, or Jawi, as their first language. 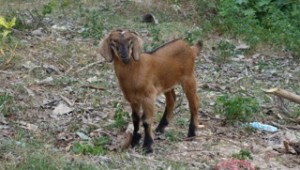 I walked to the end of the street, which gave way to a gravel path that led to a curtain of green. Goats roamed on the green. One seemingly teathered, from the obvious blue nylon rope around its neck, was evidently free to wander as it trotted along with a wooden stake dragging along at the other end of the leash. A kid (young goat) ambled behind, its intentions fixed on its mother’s teats.

As I turned back to leave in the same direction I had come from, I could see that curiosity had built up amongst the villagers at the stranger with a large camera, enthralled in all that was common and insignificant to them.

A few men, mostly bare-bodied, were sitting on the porches of their houses. It surprised me how much one could fit underneath a sarong. One of the men had a pistol muzzle sticking out from his sarong.

“Selamat Siang,” I called out again, adding a clumsy wave to emphasise a non-threatening demeanour. This time, I was beckoned to go over for refreshments by a male villager who was lounging on the front porch of his house.

A young child served us a tray of green Fanta soft drinks and neatly arranged packeted cakes. “Silakan Makan (which means ‘please eat’),” the man gestured with his hand outreached, fingers closed together and palms upward.

In Narathiwat-accented Bahasa Melayu, he ran the gamut of questions from my name, to country of origin, to marital status. Then came the question, “What is your religion?”

“Would this be a turning point in our brief but cordial relationship thus far?” I thought to myself. Taking a quick assessment of general religious knowledge, the word “Krit” (which means “Christian”) passed hesitantly between my clenched teeth, an instinctive attempt to conceal my half-lie. I hadn’t been to church in years, but I was in an Anglican school for 12 years. I justified that it would definitely be better off being associated with a religion of the book versus being treated as agnostic. He went on to introduce himself and his family. His grandson scurried around at our feet, and played with what looked like a plastic golf club. I realised a little later it was a toy pistol with a very long barrel. Funny how in a volatile area such as this where the real McCoy had wrought untold grief in communites, that children can still find amusement with a toy firearm.

“This village has 1,001 people,” the old man proclaimed, emphasing the number one with a stiff index finger.

He paused for a second and as if in a bid to reassure me, added in broken English, “Next door stay Chinese. But move to Bangkok.”

“I am policeman,” he added.

“Oh really,” was all I could muster. My mind went back to the red police vehicle I saw at the end of the road and reasoned that it could be possible.

“You are safe here with me. Those men are my inspectors,” the old man said, pointing to a group of men in the house next to us.

More thoughts of American cowboy western movies played in my head. I remembered scenes of sheriffs passing out badges to random people, conferring upon them the status of deputy and the right to bear arms and the license to kill. 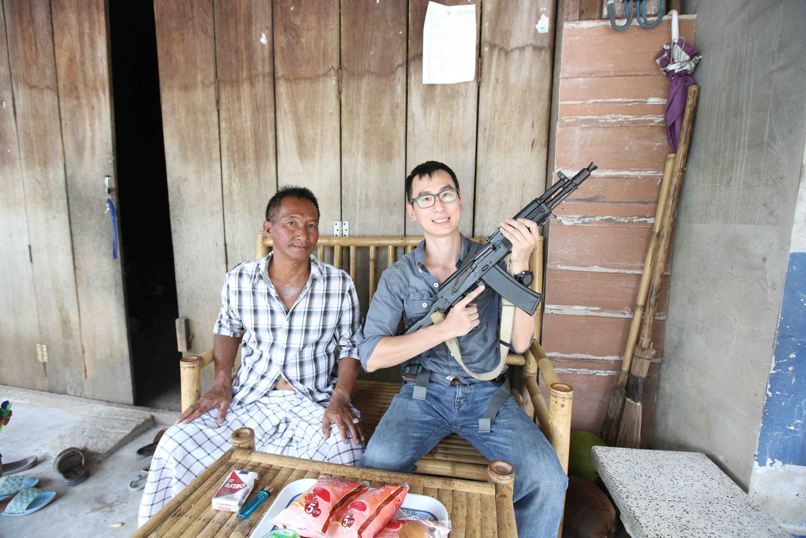 After more banter, my host went into his home and emerged with an AK-47 rifle. He unfolded the butt of the firearm.

“Thai army go home,” he said. Brandishing his weapon, I was not sure if he meant he had chased the army away by force or that he had proven to the military he was capable of protecting his village and thus had been given jurisdiction for the security for his village.

“I’ve got more inside,” he said smilingly with the kind of smile I couldn’t make out if it’s threatening or innocuous. All in all, the fact that I survived to pen this story and was not kidnapped for ransom likely shows that his hospitality was genuine.

However, I still can’t quite shake the thought that AK-47s don’t quite seem like an army- or police-issued weapon in a pro-American country.